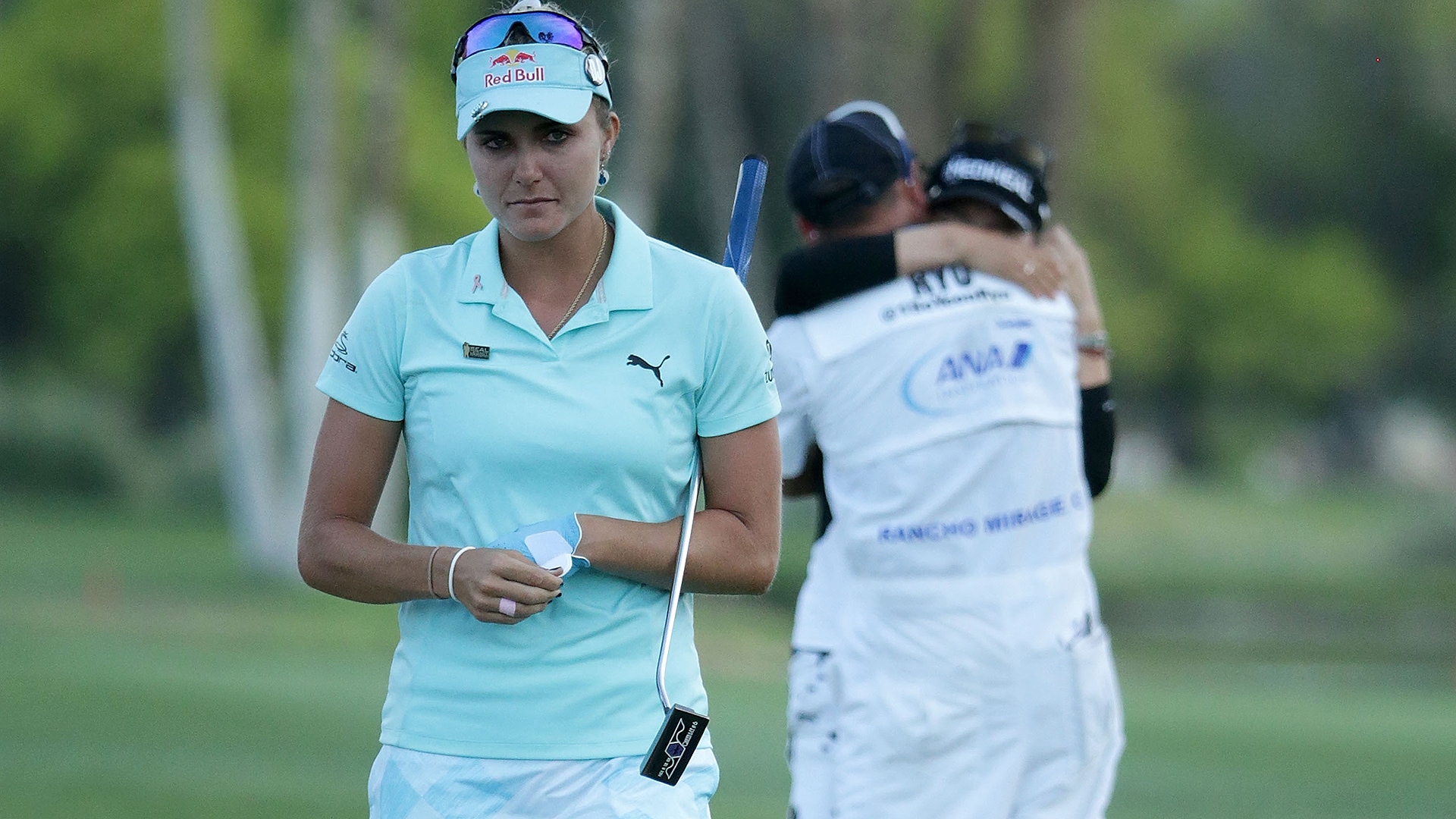 Standing behind the 18th green Sunday as this gut-wrenching day came to such an unmerciful ending, Kerr couldn’t hide her outrage.

“This is wrong,” said Kerr, the 18-time LPGA winner. “Where’s the common sense? Where’s the discretion? Where's the honor? This kind of stuff has to end. It makes us look bad. It makes the game of golf look bad.”

Kerr nailed Sunday’s unsatisfying ending to the ANA Inspiration in a nutshell.

The setting around the 18th green at Mission Hills is as close as there is to a temple of women’s golf, with the walk of champions leading players past the Dinah Shore statue and over a bridge to Poppie’s Pond. Kerr hated how the spirit of the game could seem so cruel and wicked in this special place.

Kerr hated that Lexi Thompson had to lose the way she did, with the Rules of Golf and yet another controversially timed video replay spoiling the nature of the finish.

That’s not to say Kerr hated So Yeon Ryu winning. She likes Ryu, and she felt bad for her, too.

Kerr was moved at how fans around the 18th began chanting “Lexi,” how they rallied for her so empathetically, but she didn’t like how some fans seemed to root for Ryu’s last approach shot to get in the water during their playoff.

“I really like So Yeon,” Kerr said. “She doesn’t deserve this.”

Ryu is one of the most popular players on tour, a gentle spirit and respected competitor whose kinships cross all the many borders in the women’s game.

But Ryu’s win won’t be celebrated the way it should be, not with the way Thompson was so harshly hit with a pair of two-stroke penalties as she left the 12th green in the final round.

Thompson was giving a tour-de-force performance Sunday, a virtuoso effort that seemed destined to be the defining high mark of her still young career.

We just didn’t think the comparisons would also go to another distasteful rules controversy.

While Thompson couldn’t overcome the hard blow and win the way Johnson did, she was just as magnificent in her fight. She had so much more to overcome than Johnson, four shots instead of the single shot Johnson faced. The blow was so much more dizzying, with Thompson being told coming off the 12th green that she was being penalized two shots for incorrectly marking her ball at the 17th green a day earlier, for placing her ball back down directly in front of her mark, instead of where she originally marked it, slightly to right side of the mark. And that she was getting two more penalty shots for signing an incorrect scorecard.

Thompson went from two shots ahead to two shots behind in what had to feel like a kick in the gut.

She wept going to the 13th tee but somehow marvelously went on to birdie the hole, and birdie the 15th to briefly take back the lead.

In the end, with a brilliant 5-iron to 18 feet to set up a closing eagle that would win her the championship, Thompson looked as if she was going to script the greatest ending in golf history.

This looked like it would end as a celebration of Thompson’s great poise, that it would be remembered as a testament to her resilience, but her eagle putt stopped short.

And Ryu then went on to beat her with a birdie in the playoff.

“Lexi’s the most honest player out here,” Kerr said. “She goes to all the pro-am parties, goes to so many junior clinics, signs so many autographs. She does all the right things.’

Anna Nordqvist was also at the back of the 18th green watching Sunday’s finish unfold, Nobody there could empathize with Thompson more.

Nordqvist lost the U.S. Women’s Open last summer after a video replay showed she grazed a few grains of sand with her 5-iron as she pulled it back in a fairway bunker on the second playoff hole. She was assessed a two-stroke penalty as she played the final playoff hole. It sealed her fate as Brittany Lang went on to win.

While Nordqvist was encouraged with the USGA & R&A’s recent release of a proposed sweeping makeover of the Rules of Golf, she was disappointed by a glaring absence in their work. She wanted video review to be addressed.

“This rule is the major one that needs to be changed now,” Nordqvist said.

Nordqvist said she doesn’t have a problem so much with rule violations being discovered by video review. She has a problem with the timing of penalties, how they can be assessed so long after they occur and how that timing changes the integrity of competition.

“It was disappointing to see another bad timing here,” Nordqvist said.

The LPGA will get hammered for this, but the rules officials applied the rules the way they should have been.

That’s because the Rules of Golf allow for no discretion, mercy or even common sense in the way video review is used.

Sue Witters, the LPGA’s vice president of rules and competition, had the unfortunate duty to inform Thompson of her violation.

A viewer watching Saturday’s telecast alerted the LPGA to the possible violation with an email sent to LPGA.com’s Fan Feedback. Witters’ rule staff received it on Sunday with Thompson playing the ninth hole in the final round.

It took the LPGA time to find and review the Golf Channel footage. Witters said the video clearly showed that Thompson put her ball back in the “wrong spot,” maybe an inch from where she should have placed it.

“I didn’t realize I did that,” Thompson said. “I didn’t mean that.”

Witters acknowledged the human component in delivering the news.

Witters was asked what discretion she had. She said there isn’t any when a rules official clearly sees the violation.

“What's my choice?” she said.  “If it comes out there was a violation in the rules, then it would be the opposite story: `Oh, they knew. Why didn't they do anything about it?’ I can't go to bed tonight knowing that I let a rule slide?”

The villain here is the Rules of Golf.

It’s video review and no good guidelines in how it should be used or tamed or restricted.

Video replay has simmered for so long now as a source of the most wicked adjudications of the game’s rules. Nordqvist is right. It’s complicated, but video review ought to shoot to the top of the USGA and the R&A’s priorities in remaking of its rules.