Rest can only help Tiger, Phil after wild Saturday 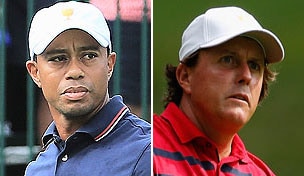 If you’re a Tiger Woods or Phil Mickelson fan, you got to see Tiger and Lefty from sun up to sun down at the Presidents Cup.

Actually, with the monsoon season here at the TPC Rain Forest (aka Muirfield Village Golf Club), there wasn’t much sun, but there were a ton of birdies by the game’s two biggest stars in a marathon day of golf.

Woods and Mickelson put on a fireworks show. They combined to be a part of 15 birdies and an eagle on the day.

Sunday holds the promise of another full day of Tiger and Lefty.

While Woods and Mickelson have had their share of struggles in Ryder Cups, the Presidents Cup has been their tonic. They’ve played brilliantly leading the Americans so far this week, but this weekend is challenging them with an awful lot of golf over a late-season run of an awful lot of big tournaments.

At the end of Saturday, with the Internationals trying to turn this event around, you had to wonder how much gas is left in Woods’ and Mickelson’s tanks. It was such a long, grueling day.

“I don’t know how these guys are still on their feet playing in conditions that were very tough,” Internationals’ captain Nick Price said of all the players in Saturday’s marathon.

This has been a long season for both Woods, 37, and Mickelson, 43. Woods has battled through back, neck and elbow issues and isn’t that far removed from knee problems. Woods confessed at the Tour Championship last month that he was feeling tired, that he struggled in the middle of that championship under “tired” legs.

Mickelson made his own revelations at the Tour Championship, explaining that this season was too busy for him, that he needs to significantly cut his schedule to be at his best. He does have that psoriatic arthritis issue. He battled stiffness after a rain delay in the middle of the first session on Thursday, and he didn’t feel right coming back out after play resumed.

There have been challenges here for both players.

“They are exhausted,” Couples said.

You wouldn’t know it, though. They’re responsible for five of the USA’s 11 ½ points.

Woods is 3-0 in this Presidents Cup, teaming with Matt Kuchar in all three of those victories.

Woods played 31 holes on the day. He was there before the sun was up, in position to play at 7:35 a.m. He didn’t leave Muirfield Village until after the sun set.

Woods helped the Americans notch two points on Saturday. In that early conclusion of the suspended foursomes, he and Kuchar needed four holes to finish off Louis Oosthuizen and Charl Schwartzel, 4 and 2.

After a short break, Woods was right back out there in fourballs with Kuchar again, taking down Adam Scott and Hideki Matsuyama, 1 up.

After another short break, Woods was out once more with Kuchar, this time to take on Ernie Els and Brendon De Jonge in foursomes.

“Tiger, honestly, is beat up,” U.S. captain Fred Couples said. “But he is playing his tail off.”

Amid Saturday’s three sessions, Woods sat through a 1-hour, 17-minute rain delay. His joints can get creaky, and there were late signs on the scoreboard that maybe his energy’s depleting. Woods and Kuchar lost the first hole in the day’s last foursomes match and trailed all the way until the sun set, falling 2 down through nine holes to Ernie Els and Brendon de Jonge when play was suspended.

Couples said Woods and Mickelson aren’t just vital on the course. He relies on them heavily off the course in helping make decisions. He asked them point blank if they were good to go in all five matches.

“I can ask Tiger anything, and he goes,`No, I'm playing five matches,’” Couples said. “And I said, `OK.’  And I asked Phil, and he said, `I've never been more excited to play golf in my life, and I'm ready to go.’  So that was pretty easy for them.”

At the Ryder Cup a year ago, Mickelson created some debate when he asked that he and Bradley sit out the Saturday afternoon fourballs session to be fresh for Sunday singles. The Americans ended up losing the Ryder Cup by a single point. There will be no similar scrutiny this week, but just how much fuel both Mickelson and Woods have remaining is a legitimate question.

Mickelson didn’t have to show up quite as early as Woods on Saturday morning. After finishing his foursomes match Friday evening, Mickelson joined Keegan Bradley on the first tee for Saturday’s fourballs at 8:33 a.m. They won that match, 2 and 1, against Els and de Jonge.

Mickelson and Bradley took a 2-1 record together in the day’s last foursome session, but they struggled early in that last match, falling 2 down to Jason Day and Graham DeLaet before fighting back to square the match with five holes to go. That’s where they stood when darkness suspended play.

Maybe a night’s rest is all Woods and Mickelson need to finish off what they’ve started so brilliantly.