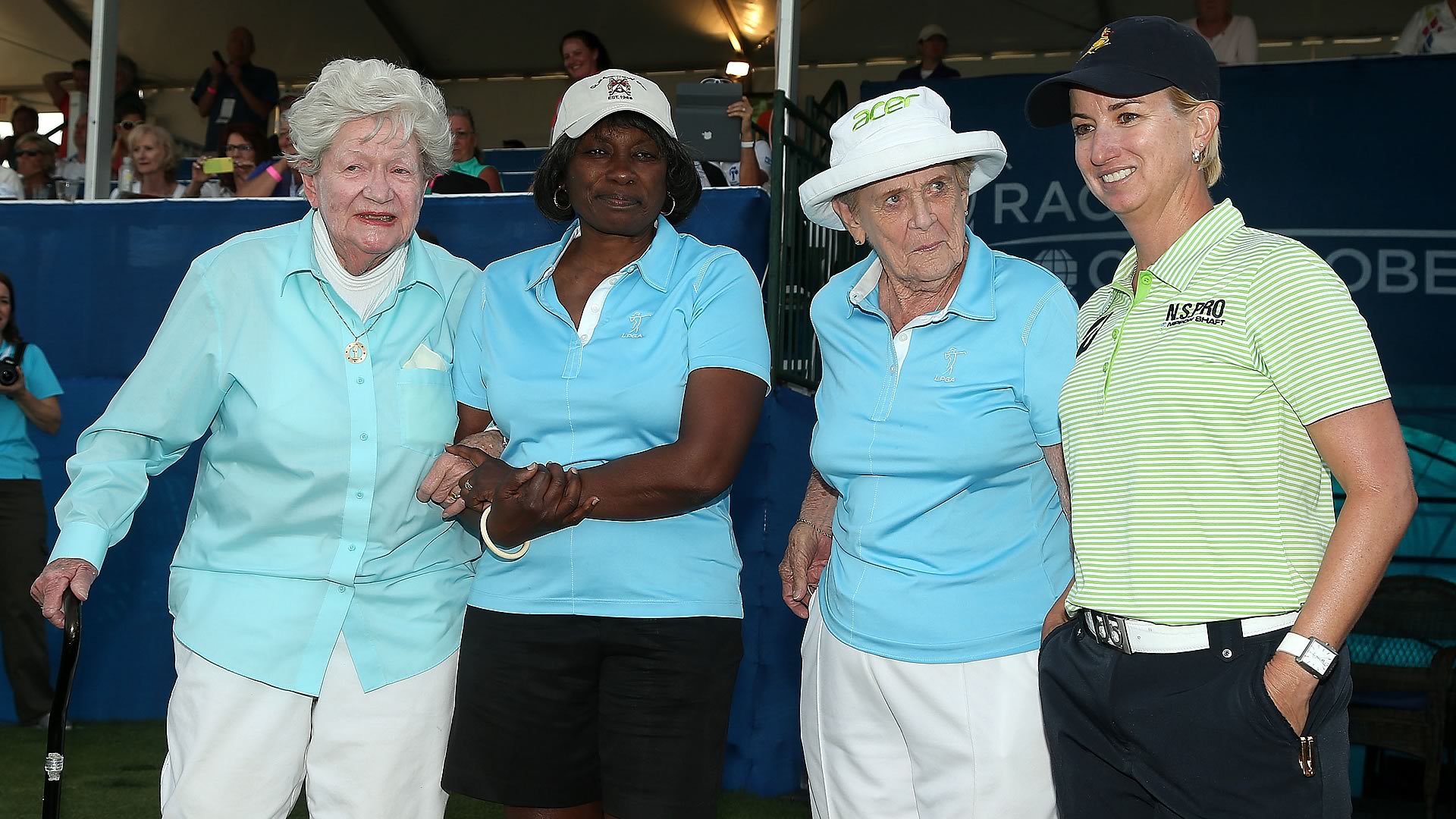 The difference between a crazy idea and a brilliant one can be as narrow as a tight rope.

LPGA commissioner Mike Whan knows this because he walked one creating the Founders Cup.

Five years ago, he teetered with his fate daring to take a radical idea to his membership, but today the Founders Cup is paying dividends even the commissioner couldn’t have seen coming. This unique event looks now like a catalyst that just might secure the future of his tour.

Back in 2011, Whan created the Founders Cup to honor pioneers of the women’s game and asked his pros to play the inaugural event for free. He asked them to donate the entire purse to LPGA-USGA Girls’ Golf and other charities. He proposed this as a way to simultaneously pay back and pay forward, to honor the sacrifice tour founders made and also invest in the future of women’s golf.

Whan was bold enough to ask this just 18 months after a player mutiny got his predecessor fired.

Given the bare-boned nature of the women’s tour at the time he proposed the Founders Cup – with full-field, check-cashing opportunities troublingly scarce – Whan’s idea seemed oddly timed. He made some of his membership wonder if he ought to trade in his suit for a strait jacket.

“It was a big risk at the time,” said Jon Podany, Whan’s chief marketing officer and right hand man. “A new commissioner could have been laughed out of the building, coming in and asking players to play for no purse. At that time in our history, it was a pretty bold move.

“But Mike’s a visionary, an idea guy, an innovator. He has a lot of passion for getting behind new ideas, for trying to be different. I think those are among his strongest qualities. He’s willing to take risks, and he isn’t afraid to fail. He will make the bold move, and I think the organization is energized by that.”

Today, the Founders Cup shines as a beacon that illuminates the unique pathway Whan is using to revitalize the women’s tour, a creative route that has captured more than the attention of PGA Tour commissioner Tim Finchem. It also has gained Finchem’s admiration. And that’s a potential game changer for the future of women’s golf.

Finchem alluded to that a week ago at Trump Doral when he pointed out that the growth of girls’ golf is a factor in the alliance.

“The women’s game on the amateur side is perhaps the fastest-growing aspect of our sport, here domestically and certainly around the world and Asia, et cetera,” Finchem said. “The growth of women in the game is crucial, absolutely crucial, to our ability to grow the game.”

After the inaugural Founders Cup in 2011, title sponsors were so enamored with the women’s altruistic efforts, they began funding a real purse in addition to donations to LPGA-USGA Girls’ Golf. The program has exploded since linking with the Founders Cup, growing from 5,000 participants in 2010 to 50,000 this year. Tournament proceeds have totaled more than $1 million for Girls’ Golf.

There’s another element of the Founders Cup that indirectly plays into the PGA Tour’s new partnership with the LPGA. The Korean TV network JTBC is title sponsor to the Phoenix event.

Last week, Finchem said he wanted to “applaud the LPGA” for its “very smart” decision to pursue global markets where women’s golf was more popular than men’s golf. He also said the PGA Tour wanted to collaborate with the LPGA in further “tapping into the global marketplace.”

Finchem has noticed how the LPGA has brought its international business success home, not only with JTBC, but with Japan’s All Nippon Airways becoming title sponsor of the LPGA’s first major championship of the year in Rancho Mirage, Calif., with Korean-based Kia continuing to sponsor an event in suburban San Diego and with Japan-based Lotte sponsoring the LPGA event in Hawaii. Plus, there is Taiwan’s Swinging Skirts Golf Foundation, which will be putting on its event in San Francisco for the third year, and Japan-based Yokohama Tires, which will be sponsoring the tour’s Alabama event for a third year.

Whan believes a philosophy he adopted from the LPGA founders underlies his reconstruction of the women’s tour. It’s no coincidence the LPGA has grown from 23 events that inaugural year of the Founders Cup to 34 this year.

“If you walk through the LPGA offices today, in almost every hallway, you’ll see a sign that says, ‘Act like a founder,’” Whan said. “It’s amazing what the women who founded the tour left us. The Founders Cup was a chance for us to showcase the philosophies of these women, not just to the public but to ourselves.

“I really believe when I got here, the LPGA did not do a great job of remembering the philosophies that got us here. It doesn’t mean they weren’t still in us, because they were. We just weren’t stepping back to appreciate it. Now, at least once a year, we have an opportunity to come together and remember that, and to do what the founders did, which is to leave the next generation in better shape.”

Whan doesn’t take credit for the “Act Like a Founders” slogan, but he gets credit for making the servanthood theme central to the new LPGA culture. He also gets credit for risking his future on the radical Founders Cup idea.

“There wasn’t unanimous support for the original idea,” Podany said of some player pushback. “There were some issues, but we were able to get through them. I think the overall success and messaging of that first event was better than we could ever have expected.”

In that first year, a couple LPGA stars pushed back.

Paula Creamer and Cristie Kerr both said they supported the Founders Cup concept, but they didn’t like that Whan was proposing a $1.3 million mock purse when only $500,000 was going to be given to Girls’ Golf. If they were going to donate all their mock winnings, then they wanted an actual $1.3 million to go to charitable causes, including some of their own favorite charities.

“A couple months before that first tournament, I would have told you I thought I did a pretty good job of listening to players,” Whan said. “This made me realize that maybe the size of my ears weren’t what I thought. These players didn’t have a problem playing for no purse, or paying forward. Their message was that if we were going to do this, we should make sure we are paying a lot more forward. The players reaching out to question me, that pushed me forward.

“The other concern back then was that this was our first domestic event of that year. A couple veterans told me they liked the Founders Cup idea, but for some young players who had fought to finally make it to the LPGA, it was pretty tough to ask them to play their first event for a mock purse. All these things resonated. It forced me and my team to think bigger.”

Whan’s team turned the Founders Cup into an event with a purse and giant charity component.

“To be honest, the original idea was designed to get players, media and fans to take notice,” Whan said. “We didn’t want to launch the Founders Cup as just another tournament. We wanted something philosophically that would make people go, ‘Wow, I’m not sure other sports would do that.’ I’m not sure other sports had founders like our 13. They didn’t make a lot of money and never really got rich, but they were proud of what they were building. We needed to make a similar statement, to really celebrate that.”

Whan jokes that he may get some big hits with his big swings, but they also often come with big misses. Still, he pushes his staff to think big, to take risks.

“Almost every big choice we’ve made has come with mistakes, some really noticeable, some not so much,” Whan said. “I think if you keep getting three out of five things right and you go back and fix the other two things, you tend to be OK. If you’re going to wait until you can go 5 for 5, you may never end up launching anything.”

Whan might have missed taking his first couple swings with the Founders Cup idea, but he ultimately hit a home run with it for women’s golf.