Rooting for drama in the battle of Tiger vs. Jack 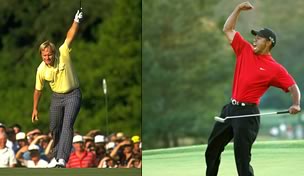 There is no cheering in the press box.

The mandate governs an important ethical principle among sportswriters.

We are not supposed to root, but I have a confession to make. I do root.

Father, forgive me, for I have sinned.

I’ve rooted at nearly every sporting event I’ve ever covered.

I don’t do it openly, but in my head, I’m cheering like a face-painted NFL fanatic in a crazy team-colored wig.

I root for drama. I always have. I typically root for the team that is behind to make it close, to cut into the deficit it is facing. In the wildest back-and-forth games, I’ve rooted for both sides.

As a sports writer, as a lover of sports, I want to see a game, match or contest come down to the last play, to the last shot or the last point. (Though I admit deadlines make blowouts easier to write in late night games.)

There is nothing in sports better than a two-minute drive with the outcome on the line in an NFL or college football game . . .

Nothing like the last shot in a tie game in the NBA or college basketball . . .

Nothing like a 3-2 pitch with the bases loaded and two outs in the bottom of the ninth in Major League Baseball . . .

Nothing like watching a player needing to make birdie at the 72nd hole to win a golf tournament . . .

There is nothing more riveting in sport than seeing how talented human beings respond when the pressure is ratcheted up to the highest level. We’re all more alive with that last Hail Mary pass in the air, with that last fade-away jump shot floating toward the basket, with the last pitch blazing toward home plate. That’s where greatness is revealed, or undone, if just for a moment in a player’s life. Those are the moments I root to see.

That’s why I have another confession to make.

Now, what happens after Woods gets to 17 majors, that is left to fate, to destiny, to the will and gifts of the humans involved in the struggle.

But I want to see the drama that quest can produce, the excitement it can create.

I want to see the greatest chase in our generation re-engaged. I want to see it come down the wire. I’m rooting for that moment.

Woods, you know, wants it more than anyone. His Sunday failure at Pebble Beach feels like it makes the quest harder, creating another scar to overcome, but it’s possible the failure merely heightens his drive. Phil Mickelson said Woods brings out the best in him. The sting of that loss might ultimately bring out the best in Woods again.

As a kid, I was a Hank Aaron fan riveted by his pursuit of Babe Ruth’s career home-run record. Growing up in southern Wisconsin, I was a paper boy for the Chicago Tribune, and every morning, before folding the papers, I’d peel out the sports page to see if Aaron hit another homer, to see how close he was to reaching and passing Ruth’s magical mark of 714 homers.

I think my face was about 2 feet from the TV screen when the Dodgers’ Al Downing served up the ball Aaron hit to pass Ruth. I felt like I was 10 feet in the air when Aaron’s blast cleared the fence at Atlanta-Fulton County Stadium.

Back then, I was rooting for Aaron to break the record.

Today, I’m rooting for the drama, for the possibility of returning to a moment like that, where greatness is defined or denied, where we’re all more alive with the last ball in the air