Sleeping on a dream 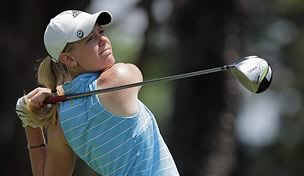 COLORADO SPRINGS, Colo. – A moment of wonder struck Amy Anderson as she walked the seventh hole Thursday at The Broadmoor.

That’s where she looked up to see her name atop a U.S. Women’s Open leaderboard.

The 18-year-old amateur from North Dakota wanted to rub her eyes.

“That was surreal,” Anderson said.

She looked at her older brother, Nathan, who’s toting her bag this week. They laughed. Who would have believed they would see that leaderboard back when they were growing up in tiny Oxbow, N.D.? There are literally no stop signs in the town of 300 about 10 miles outside Fargo.

“We joked that somebody better get a picture of that, because it isn’t going to be up there long,” Anderson said.

They were wrong. When Thursday’s first round was suspended due to lightning, Anderson’s name was still atop the leaderboard along with two-time major champion Cristie Kerr.

“It’s going to be up there all night, so I’m excited,” Anderson said.

Anderson is 2 under through 12 holes, Kerr through 15 holes.

They are a shot ahead of Inbee Park (through 17 holes), Ai Miyazato (through 15 holes) and Silvia Cavalleri, who birdied the first hole right before the weather horn sounded.

After a 2-hour and 24-minute weather delay, play was suspended for the day at 3:11 p.m. Mountain Time.

Only 25 players in the field of 156 were able to finish their rounds. Seventy-two players never got started in the afternoon wave.

Defending U.S. Women’s Open champion Paula Creamer and world No. 1 Yani Tseng were among those players who never got to the first tee.

The field will return Friday at 7:45 a.m. local time to finish the first round. The second round will begin shortly after the first is completed.

“It’s shocking,” Kerr said of the decision to stop play with sunset still almost six hours away. “I know there is a lot of stuff in the area, but it gets dark at 8:30 or 9 here.

“Some of my best friends, like Morgan Pressel, they haven’t even teed off yet. So, it’s going to have a domino effect.”

Kerr said she doubts the championship can be completed by Sunday’s scheduled finish.

If the wonderment’s going to linger, Anderson probably won’t mind a long week.

With snow and freezing temperatures gripping Oxbow in the winter, Anderson didn’t touch a club last November and December. When she did want to hit balls in those long winter months, she did so in a heated driving-range bubble that’s no longer than 60 yards.

“I like being the underdog,” Anderson said. “It’s a position I’m really comfortable with. I don’t expect to go out and win this, or continue playing like this. I mean, I’m going to try to work as hard as I can to do that, but I’m just going to go out there and have fun.

“This is an awesome experience. It’s once in a lifetime.”