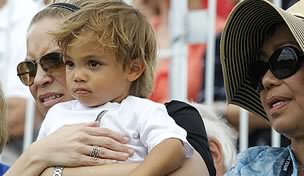 Getty Images
NORTON, MA - AUGUST 30: Vijay Singh of Fiji Islands reacts after a putt during the second round of the Deutsche Bank Championship at the TPC Boston on August 30, 2008 in Norton, Massachusetts. (Photo by Jim Rogash/Getty Images)  -

PALM BEACH GARDENS, Fla. – Tiger Woods didn’t have to look far for inspiration to close hard Friday at the Honda Classic and make the cut.

With Charlie Axel Woods, Tiger’s 3-year-old son, being toted around the gallery for the final nine holes, Woods rallied late.

Charlie, accompanied by Tida, Tiger’s mother, watched from a balcony above the ninth green when his father holed a 10-foot birdie putt to finish off a round of 2-under-par 68 with a birdie-birdie finish.

This is believed to be the first time Charlie has attended a PGA Tour event that his papa was playing. Woods now makes his home in Jupiter Island, about 20 miles from PGA National.

After rinsing his tee shot and making double bogey at his 14th hole, Woods was teetering along the cut line.

Woods is at 1 under par, seven shots behind leaders Justin Rose and Tom Gillis.

At the fifth tee, Woods’ 14th hole, he came up short at the par 3, his ball spinning back in the water. After playing from the drop area, he missed a 20-footer and made double bogey. From there, the pressure was on, but Woods said he wasn’t thinking of the cut line. He and caddie Joe LaCava were thinking about how far they were behind the leaders.

“I told Joey on the last couple of holes, we go birdie-birdie and we'll be within seven,” Woods said. “And that's really do-able on this golf course. The guys, they don't really go all that low, so if we post a low one tomorrow, we'll be right back in it.

“I didn't really have it today,” Woods said. “But I scored. That's something I can take out of the round. I know I putted a lot better today.”

Woods missed some good birdie chances in the middle of his round – three chances from 12 feet or less in a four-hole stretch – but he made four birdie putts inside 10 feet and also a 25-footer.

“It was nice to get that kind of finish, because I was struggling today a little bit trying to find a motion that was going to get the job done,” Woods said.

Woods wasn’t without a lucky bounce or two. His pushed tee shot at the fourth with an iron beaned Brad Merriman of West Palm Beach, ricocheting off the top of his head to a decent lie, where Woods stuffed his approach to 7 feet to set up birdie.

“I made some bad swings today, but somehow I managed to score,” Woods said.

Woods managed to secure himself two more rounds to prep for the Masters, and perhaps more with a big weekend.