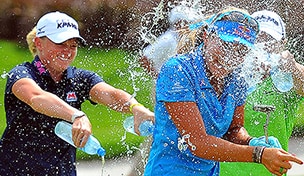 Getty Images
Marcela Leon chips the ball towards the green as her former Big Break Atlantis competitors watch from the side.  -

The women’s game feels as young as it ever has.

With Lexi Thompson bursting back into the winner’s circle Sunday, youth is staking yet a larger claim on the game.

Thompson won the Sime Darby LPGA Malaysia in a four-shot runaway at Kuala Lumpur Golf and Country Club. At 18, she now has a pair of LPGA titles on her resume.

Lydia Ko, 16, successfully defended her title at the CN Canadian Women’s Open in August. In between those teen wins, Ko and Thompson made hard runs at becoming the youngest winners of a major championship. Ko finished second at the Evian Championship in France last month, Thompson finished third.

The dynamic teen duo isn’t alone making headlines this season. England’s Charley Hull, 17, stole the show at the Solheim Cup two months ago, making a name for herself while helping the Europeans win the event for the first time on American soil.

With Ko revealing last week that she is turning pro and petitioning the LPGA for membership, the future of the women’s game is front and center as the 2013 season winds toward its close.

For Thompson, Sunday’s victory was a reaffirmation of the promise she showed qualifying for the U.S. Women’s Open when she was 12 and then winning the LPGA’s Navistar Classic when she was 16.

“Words can’t even describe the feeling I have right now,” Thompson told reporters after winning Sunday. “It’s sort of like a rerun from Navistar.”

Thompson made news around the world when she won Navistar Classic in 2011, becoming the youngest winner of an LPGA event at the time. Ko would come along a year later to set a new mark with her first title in Canada.

There was some frustration for Thompson trying to get that second LPGA title, but it only made Sunday’s triumph more satisfying.

“It took longer than I thought,” Thompson said. “But it’s the top players in the world, so it’s not easy. Every tournament you have to shoot super low, and you have to have your A-game. That’s what I had this week.”

Forty-three LPGA events passed before Thompson claimed her second title, but the time didn’t pass without steady progress. Thompson, who made the American Solheim Cup team, has built a reputation as one of the best ball-strikers on tour. She moved to No. 21 in the Rolex women’s world rankings entering the Sime Darby and will jump to No. 14 in the world in Monday’s release of the newest rankings, catapulting over Americans Angela Stanford and Lizette Salas. It will make Thompson the fourth-highest ranked American in the world, behind No. 3 Stacy Lewis and just behind No. 11 Paula Creamer and No. 12 Cristie Kerr.

At times, it seemed as if putting was all that was holding Thompson back from breaking through for another victory.

“I’ve worked so hard this whole last year, improving on my short game in particular, and just to have it pay off means so much to me,” Thompson said.

Late this summer, before the Evian Championship, Thompson set up a long session at Trump National Doral in South Florida with her instructor, Jim McLean.

“I told her, `Just bring your putter,’” McLean said Sunday in a telephone interview. “It was a 2 1/2-hour session, and we made some big changes.”

Thompson had been tinkering for some time with changes to her putting stroke, trying to improve it. She tried left-hand low. She tried moving her eyes more over the line, a change from what she was accustomed to as a youth, when she set up with the ball outside the target line and her eyes. She decided to stick with a conventional grip.

“The last few events have actually been a lot better with my putting,” Thompson said. “I went back to my old style of putting and just went to how I was putting when I was really little, hitting them a little firmer and staying a little farther away [from the ball]. So, I’m really confident with my putter. Mainly, that’s what putting is all about, just getting over the putter and saying you’re going to make it.”

McLean said they made changes to Thompson’s arms, shoulders and head positions over the ball.

“They were big changes,” McLean said. “She had her eyes over the ball, and it just wasn’t working. I told her just because you keep hearing you have to have your eyes over the ball doesn’t necessarily mean it’s true. Brad Faxon and Ben Crenshaw have their eyes inside the line.”

Thompson is scheduled to play in this week’s LPGA KEB HanaBank Championship in South Korea. The way she is putting, she will be among the favorites to win again. If she does that, she will crack the top 10 in the Rolex world rankings for the first time. With Ko at No. 5, that would put a pair of teenagers among the top 10. It would keep the women’s game feeling as young as it ever has.