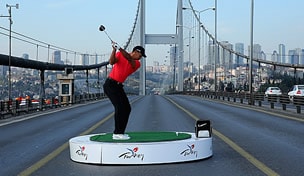 Rarely does Tiger Woods get nervous on Tuesday of a tournament week, but he was this week.

Speaking in a news conference Wednesday in advance of playing the Turkish Airlines Open, Woods told reporters that hitting drives down the Bosphorus Bridge in Istanbul the day before to gain publicity for the tournament was nerve wracking. Only half of the six-lane bridge was closed while Woods literally belted drives from one continent to another (from Europe into Asia).

“I’ve never done that one before,” Woods said. “I’ve hit balls down airports before on runways but never down a bridge. The scary part was just getting off a plane having flown for 12 hours and having to hit driver down the narrowest fairway I’ve ever seen.

“The wind was coming off the left a little bit, all these cars were driving on the right, so I lose any balls to the right, there’s an international incident right there. So, that was a little bit nerve-racking, but, trust me, every ball drew. But it was pretty cool. Somebody was telling me I hit one 550 meters or something like that, which was not bad.”

Woods is playing his last tournament this year that counts as official on any tour.