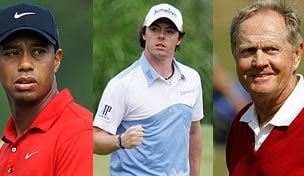 BETHESDA, Md. – Rory McIlroy did more than win the U.S. Open in spectacular fashion Sunday at Congressional Country Club. He threatened to change the nature of the question that’s captivated the sport for more than a decade.

If Woods regains his health, if he regains his winning form, there’s a compelling new dimension to the challenge.

If Woods is going to bounce back and mount a run at Nicklaus’ record, the question becomes whether he can get through McIlroy to claim his life’s ambition.

That’s the intrigue that holds the most potential for captivating a new generation of golf fans. It’s the formula packed with the power to jolt another new wave of interest in the game.

If Woods, 35, finds his way back, the sport is electrified with the possibility he’s on a collision course with McIlroy, 22.

Yeah, there’s a lot of hoping in that possibility, a lot of fervent hope, because it depends on Woods finding his way back and on McIlroy building on the promise he mesmerized us with at Congressional. Neither is guaranteed, but you’ve got to like the probability that neither of these giant talents is done wowing us. And you’ve got to believe McIlroy and Woods want to measure themselves against each other in the way that heavyweight talents always do.

“It would be great,” McIlroy said. “I've watched Tiger over the last 15 years. When I was growing up, I always had putts to beat Tiger Woods in the Masters or U.S. Open. So it would be great to be able to get in contention one day, whether it be a major, or just a regular event, and go down the stretch with him, because I've never really had that experience before. Hopefully, he can get healthy and can get back playing good golf, because the game of golf is a better place with him playing well.”

There’s respect there from McIlroy, but there’s no fear. We heard that in the lad from Northern Ireland’s bravado before The Ryder Cup last fall, when he said he would love to face Woods, and that given Woods’ erratic form, everyone on the European team “would fancy his chances against him.”

Woods didn’t like the sentiment, and he made sure McIlroy knew. So, there’s an edge to that relationship.

Though Woods has won 14 majors and McIlroy just the one, momentum is on McIlroy’s side. Woods missed the U.S. Open mending knee and Achilles injuries. There’s no certainty he’ll be ready for next month’s British Open.

“When Rory can go out and dominate a field like this at a U.S. Open, he’s going to gain a lot of confidence from the event,” said Steve Stricker, the highest ranked American in the world. “Confidence is a great thing, and he’s going to have a ton of it.”

Woods and McIlroy share a common path in the way they both broke through in record-shattering fashion to win their first majors. Woods broke through winning the Masters by 12 shots in ’97, McIlroy by smashing some of Woods’ U.S. Open scoring records.

Stricker was asked Sunday if he believed Woods cared what McIlroy did at Congressional.

“For sure,” Stricker said with McIlroy still making his way on the back nine. “I think he cares. I think he’s at home watching, and I think he’ll gain some motivation from this.”

Woods vs. McIlroy. It’s a hope worth nurturing because it holds the magical possibility of being a reincarnation of Nicklaus vs. Palmer.

“I knew how good Tiger was in 2000 to win by 15 at Pebble,” McIlroy said in Sunday’s trophy presentation. “I was trying to go out there and emulate him in some way.”

If Woods still has Nicklaus’ records tacked on a wall in his home as motivation, he might want to pull them down. He might want to tack up the long list of U.S. Open records McIlroy smashed in his tour de force performance. He might want to put a photograph of McIlroy on his wall with a bull’s-eye on it, because it feels like McIlroy’s the real deal. It feels like Woods won’t be able to beat Jack’s record without beating McIlroy.

It’s projecting a burdensome load on McIlroy, to be sure, but if you can’t see the promise in the young man’s game, you can’t see.

Yes, nothing’s guaranteed in golf, but McIlroy’s locomotive momentum goes beyond his record-shattering performance at Congressional. It goes to the upward trajectory of his big-event performances. It goes to the fact that he’s had a real chance to win the last four major championships, that he’s led seven of the last eight rounds played in majors, that his final-round 62 to win at Quail Hollow last year felt like a quasi-major and that his U.S. Open triumph came in a character-building rebound from a Masters’ collapse two months ago.

The praise for McIlroy, as expected, is gushing a bit over the top, and that’s sure to get Woods’ attention.

But even the most objective PGA Tour veterans see something special in McIlroy.

“Fundamentally, he’s as good as we’ve seen ever, in my era,” Stricker said. “When Tiger was going well, that’s as good as I’ve ever seen, and I think Rory’s in that same boat. His swing is mechanically sound, and he has a great short game, and he’s long. So he’s got all the tools.”

So does Woods, if he can reassemble them.

That’s what we’re waiting for, because when Woods does, if he does, the race to catch Nicklaus resumes with McIlroy looking like he’ll have something to say about how that race ends.