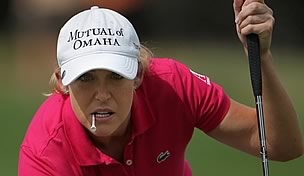 With all the stop and starts, without a single round ending on time, with the final round beginning Sunday while players were still finishing up the third round, this disorienting championship can’t find its ending.

With yet another weather suspension Sunday, the U.S Women’s Open’s conclusion wheezes wearily into Monday oh-so close to finishing.

In fact, Cristie Kerr seemed troubled by an assumption that it might actually be over with Hee Kyung Seo in the clubhouse with the lead at 3-under 281.

“The tournament’s not decided yet,” Kerr said. “I think she’s over there celebrating.”

So Yeon Ryu was one shot back with three holes to play, Kerr two back with two to play and Angela Stanford three back with four to go.

“I think it’s good,” Kerr said of knowing she has to finish birdie-birdie to tie Seo, or something even more dramatic. “You can get mentally geared up. I’m going to give it my all. It’s not over.”

The final round is scheduled to resume Monday at 10 a.m. ET with ESPN2 televising.

Just 30 players were on the course when play was halted due to darkness, none with more than five holes to play. A 2-hour and 37-minute weather suspension pushed the overall weather delays to nearly 15 hours for the week.

Seo, 21, was bubbling with the prospect of winning her first major championship. She closed with 68-68 over the final two rounds.

Seo, however, said she wasn’t celebrating.

Stanford, like Ryu and Kerr, aims to make a hard run at Seo.

“It is good to know exactly what I have to do,” Stanford said. “The good news is that I’m playing a stretch of holes where you can make three birdies. The good thing is I like those last four holes.”

Ryu also likes her chances on the finishing holes.