Timing on and off the course benefits Ko 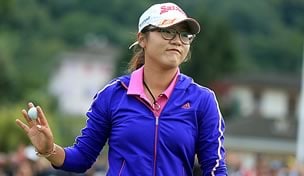 Everything seems to be unfolding so quickly now.

Three weeks ago, Lydia Ko, 16, announced she was filing for a waiver of the LPGA’s rule requiring that members be at least 18 years old and that she would play as a professional in the season-ending CME Group Titleholders.

Last week, she took to Twitter and YouTube to announce she was officially shedding her amateur status.

On Monday, LPGA commissioner Mike Whan announced he was granting Ko a waiver, effective at the start of 2014.

Ko’s professional career is officially off and running, but make no mistake, as astonishingly swift as this teen phenom from New Zealand’s rise has been, the family isn’t rushing into anything.

Every step of this process appears to be carefully and methodically thought out by the Ko family and her New Zealand Golf team advisers. Tina Hyon, Ko’s mother, told GolfChannel.com in an email exchange Monday morning that Lydia doesn’t have an agent or manager yet. She doesn’t have any endorsement deals as of yet, either. And though they’re considering keeping on Micky Millburn as a full-time caddie, that isn’t a certainty as of yet, either.

“We are looking forward to having Lydia as a full-time member for the 2014 season,” Whan said in a statement. “It is not often that the LPGA welcomes a rookie who is already a back-to-back LPGA tour champion.”

As far as going to college, Ko hasn’t given up on that possibility. Her mother informed GolfChannel.com Monday that Lydia is looking at applying to universities. Ko might still try what Michelle Wie and So Yeon Ryu did. She might play the LPGA while pursuing a college degree. Ko, though, has one more year of her secondary education to complete before college.

Ko has found a nice pace in her meteoric rise. She could have turned pro after she won the CN Canadian Women’s Open when she was 15. She could have filed a petition for a waiver of the LPGA’s age restriction after winning that first time in Canada, and she could have petitioned again this summer after winning once more in Canada, but she waited. She didn’t just give the LPGA a good look at her skill set in 11 tour starts this year. She gave the tour a thorough look at her maturity level.

It’s remarkable, but at 16, Ko has long shown patience getting to this next step. She’s No. 4 in the Rolex world rankings, sitting above every other women’s pro in the game except No. 1 Inbee Park, No. 2 Suzann Pettersen and No. 3 Stacy Lewis. She left almost $1 million on the table in LPGA winnings this year by continuing to play as an amateur.

“It has always been my dream goal to play on the LPGA, and play against the world's best players,” Ko said in a statement. “I know that becoming a member is not only performing well, but to deal with responsibilities very well. Women's golf is growing day by day, and I would love to be able to inspire other girls to take up the game, and go for it. I believe this is only the start to my career, and I have many new things to learn along the way. I am so grateful to get the opportunity to play with the players I look up to and respect. I can't wait to start the season early next year.”

So how will Ko respond as a pro?

To be sure, life will be different. The pressures are different; the expectations, too.

Once a company makes a substantial investment in a young pro, there are elevated expectations, real or imagined by a player. When you’ve sold a logo spot on your hat, shirt and golf bag, you’ve become somebody’s investment. Somebody’s buying the product you’ve become.

Ko seems well suited to escalating challenges, but even Rory McIlroy might have been affected by his huge new Nike deal this year.

While there were reports in New Zealand that Ko could garner as much as $6 million in endorsements as a pro, LPGA insiders familiar with the marketing of women’s golf scoff at that. One insider called the figure “mythical.” The market for women’s golf isn’t very good and doesn't compare to the men's game. But people in the business say Ko has something special going for her. While there are limited endorsements opportunities for professional golfers in New Zealand, Ko was born in South Korea. The market for female golfers in South Korea is substantial, if she ends up making that connection. South Korean TV is still the LPGA’s leading revenue source.

Golf marketers are curious where Ko will set up her golfing base. Will she keep it in New Zealand? Will she move to the United States? Will she set up a base in South Korea?

Her family reports she will continue to play with a mixed bag when she tees it up for the first time as a pro Nov. 21-24 at the CME Group Titleholders in Naples, Fla.

While all this seems to be coming so fast, Ko’s success is so tied to one of her great assets, the beautiful, unrushed rhythm of her swing. Her timing is something to marvel over, on and off the course.