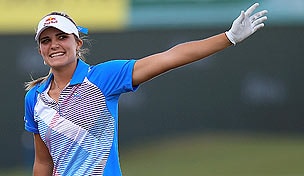 Getty Images
AUGUSTA, GA - APRIL 06: Tiger Woods pulls his driver from his golf bag during a practice round prior to the 2010 Masters Tournament at Augusta National Golf Club on April 6, 2010 in Augusta, Georgia. (Photo by Harry How/Getty Images)  -

Lexi Thompson rocked women’s golf yet again Saturday with a victory halfway around the world.

You wonder if the shock waves made ripples in the coffee cups of every established American star this morning.

The landscape feels like it’s about to change in the American game. Thompson, at 16, looks like a tectonic plate of change.

Just about every thump of Thompson’s club in her victory at the Omega Dubai Ladies Masters reverberated with the warning she’s getting ready to ratchet up the standard for U.S. born players who have struggled to keep pace with the international game’s surge. The victory comes three months after Thompson broke through to become the youngest winner in the history of LPGA with her victory at the Navistar Classic.

Yes, there’s a danger in loading up expectations on Thompson. There’s a danger in expecting too much too soon, but patience is hard to come by in the women’s game. These are sluggish times in American women’s golf. Frankly, they may be the worst of times.

Brittany Lincicome is the only American who has won as much this year as Thompson has.

American women’s golf could use a winning boost, because American players are losing so much more than they used to lose. Lincicome and Stacy Lewis were the only American LPGA members to win on tour this year. That’s the worst American showing in the 62-year history of the LPGA. Thompson, of course, wasn’t an LPGA member when she won at Navistar.

American women don’t like to hear about their slide. You ask them about the numbers, and they’ll mumble something about how the LPGA has never been a more global game.

There were only 13 LPGA events played in the United States this year. American players want more, but they aren’t helping the cause. They aren’t winning enough to get American companies excited about making an investment in them.

Rookie Ryann O’Toole may grow to be part of the answer for the Americans, but the fact that she made the U.S. Solheim Cup team after just seven LPGA starts spoke to the lack of depth in the American ranks.

Back in September, the United States lost The Solheim Cup for the first time since 2003. They didn’t have much fun licking their wounds in the Asian swing that followed. The Americans failed to win any of the four events in the Far East this fall, extending their winless streak there to 40 straight. No American has won an LPGA event staged in Asia since Juli Inkster won the Samsung World Challenge in South Korea in 1997.

This is the landscape Thompson enters as an LPGA rookie next year. This is why her emergence is challenged with exponential expectations.

While there’s a hard ceiling to break through at the top of the international game, with Taiwan’s Yani Tseng becoming such a dominant force, there doesn’t appear to be the same hard ceiling in the American women’s game.

Thompson didn’t just win the season-ending Ladies European Tour event at Emirates Golf Club on Saturday. She won answering an early challenge that she wouldn’t let rattle her. She won closing hard and fast on the back nine. She won in a four-shot runaway after falling behind on the front nine.

While Thompson made history becoming the youngest winner of an LPGA event, she didn’t lay claim to the same honor on the Ladies European Tour. Thompson won in Dubai at 16 years and 311 days old. Amy Yang was 16 years and 192 days old when she won the ANZ Ladies Masters as an amateur.

Still, however many days Thompson is into her 16th year, she is impressing with the know how she’s showing in closing out victories.

A shot ahead at day’s start in Dubai, Thompson watched Lee Ann Pace take the lead away from her with a blistering start. Thompson regained the lead chipping in at the ninth hole and never looked back, stretching her lead three more shots on the back nine and closing out with a birdie.

With Tseng looking so dominant whipping a strong field at the Swinging Skirts Invitational in Taiwan last week for her 12th worldwide title this year, and with Thompson punctuating her season in style, next year intrigues with the possibilities.