Trump is center of attention at Women's British Open 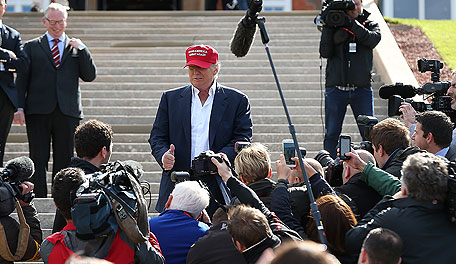 Amid a buzz of helicopter blades, whirring camera shutters and reporters shouting unvarnished questions, Trump brought the chaotic, edgy energy surrounding his presidential bid to this championship. He stepped out of his aircraft and into a hornet’s nest.

From a swarm of media jockeying for position behind security in front of the Trump Turnberry hotel, a reporter barked a request for Trump to come over for a few questions.

Trump obliged, moving close enough for reporters to read the words on his red cap: “Make America Great Again.” The questions came at him machine-gun style.

Why are you here? Won’t your presence detract from the tournament? Are you a racist?

Welcome back to Scotland, Mr. Trump.

Never has a major championship turned so frenetic so early, and never quite like this.

There was more media outside the gates of the Turnberry Ailsa course than inside for the start of this championship. Two dozen photographers parked themselves at the foot of the hotel awaiting Trump’s arrival. The assembled media corps was dominated by British press, with just a few American reporters.

Even the TV cameraman perched above the 18th green to televise the action there wheeled his camera around to point it at Trump’s helicopter as it landed. Out on the course, players in the heat of competition knew exactly when the billionaire businessman-turned-politician had arrived.

Lydia Ko was climbing the leaderboard with a strong start when she heard the distant buzz of Trump’s helicopter circling overhead. She was in the lead and on the 16th when she looked skyward.

With Trump encircled by media in front of the hotel, Lee Ann Pace stepped out the hotel’s front door. She was setting out to make the long walk to prepare for her opening tee shot. She must have felt as if she were stepping into a movie set. The media’s chaotic reception of Trump made for a surreal gauntlet to navigate.

What was Pace thinking when she opened the hotel door?

Why was Trump here? He had an answer ready.

Does he think his presence will detract from the event?

“We have this great piece of land, a thousand acres right on the ocean,” he said. “It’s just a spectacular place.”

Is Trump a racist? Trump didn’t have time to answer that question before another question was hurled at him, this one about Lizette Salas, the LPGA pro who is the daughter of Mexican immigrants.

Trump would meet a slightly less frenzied media contingent a couple hours later in an elegant new ballroom in his hotel. Before that, though, a smaller but equally aggressive media swarm relocated in scoring behind the 18th green, waiting for Salas to finish her round.

With Trump’s remarks last month about Mexico and illegal immigration creating a controversy, Salas’ opinions on immigration were suddenly newsworthy. They’re especially relevant in the women’s game, where Trump fired back at LPGA commissioner Mike Whan after Whan issued a statement three weeks ago suggesting his tour would have preferred the Women’s British Open not be played at Trump Turnberry.

Salas was busy dealing with her own challenges on the course. She was putting together a solid sub-par start to the championship before three-putting the final green to shoot even-par 72. She wasn’t happy about the finish. She slammed her putter against her bag, leaving the 18th unaware what awaited her outside scoring.

After signing her card, Salas was engulfed.

A barrage of pointed questions came machine-gun style again, including one asking if she thought Trump was a racist. Salas was gracious, thoughtful and patient.

“I’m not a politician,” Salas said. “My job is to win golf tournaments. I’m just happy to be here competing.

“Everyone has a right to say what they feel. That’s what is great about living in the United States. I’m happy to be the child of Mexican immigrants, and I’m proud of my heritage.”

Salas, No. 29 in the Rolex world rankings, was asked if she felt Trump was disrespectful saying he didn’t know who she is.

“I don’t blame him for not knowing who I am,” she said. “I’m pretty sure he has better things to do than know who I am.”

What did she think of Trump making an appearance?

“We all kind of expected him to be here,” she said. “It’s nice of him to come out and support the tour and this competition.”

All the while Salas was being interviewed, Hyo Joo Kim stood in a corner opposite her, fielding questions from three reporters. Kim, by the way, opened with a 65 and led the championship.

Reporters eventually made their way back to a ballroom at Trump Turnberry hotel, where they found a more civilized news conference setting. Under shimmering chandeliers, media was ushered past a table full of extravagant appetizers.

“I’ve never been at a press conference where sushi was served,” one reporter cracked.

When Trump arrived, about 20 photographers were poised just off the stage. Cameras whirred with his arrival. He got started introducing Martin Ebert, the architect who’s overseeing Turnberry’s multimillion-dollar renovation. Almost comically, when Trump stepped off the stage, just about every lens turned with his every moment, with a cluster of photographers following Trump to the back of the room and ignoring Ebert.

Trump would eventually answer a few golf questions before tackling an onslaught of political questions.

Did Trump speak with Whan after the commissioner received Trump’s pointed letter?

“He apologized to me,” Trump said. “He was very nice and very respectful. I said `You know, I don’t mind if you apologize to the press.’ He said, `You think I could do without it?’ I said you can do without it. You can do whatever you want. But he did call me, and he did apologize.”

An LPGA spokesman said Whan was traveling back to the United States, but the tour was focused on the Women’s British Open and the commissioner would not be giving any official response.

Trump ended the news conference saying he was also ready to focus on golf.

“I want to go watch the Women’s British Open, is that OK?” Trump said.

And then Trump was off to Turnberry to walk his beloved course in one of the most unusual first rounds in the history of the Women’s British Open.