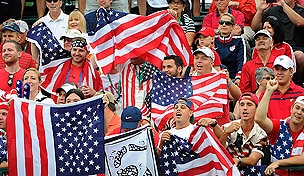 Getty Images
Michael Tobiason hits a blast from the bunker, hoping his game will work well on Big Break Greenbrier.  -

DUBLIN, Ohio – Nobody was tormenting them singing “ole, ole” in the end.

The European victor’s song, that unrelenting chorus of woe to American ears at the end of Ryder Cups, was nowhere to be heard with “USA” chants ringing across Muirfield Village late Sunday.

This American Presidents Cup victory helped push the echoes of that song and the memories of last year’s loss at Medinah farther away.

The United States’ 18½ to 15½ victory against the Internationals was a soothing tonic for a team that couldn’t seem to stop smiling all week.

U.S. captain Fred Couples is a large reason why. He has led the Americans to three straight victories in the Presidents Cup now.

“I thought this was as relaxed a team as I’ve ever seen,” assistant captain Jay Haas said. “As much as people want the Presidents Cup to be as intense as the Ryder Cup, Fred won’t let that happen.

Nothing seems to get Couples too worked up outwardly during Presidents Cup week. Not even a streaker. Couples was unfazed when a naked woman went racing past him and everyone else around the 18th tee Sunday afternoon.

This is a team that had a pet squirrel as practically its mascot.

This was a team with Tiger Woods doing a Fresh Prince of Bel-Air high five as Matt Kuchar’s “Carlton.”

This Americans clearly enjoy that the Presidents Cup isn’t the Ryder Cup.

“We laughed a lot this week,” Phil Mickelson said. “At first, when the Presidents Cup came about in 1994, I was concerned that having a team event every year would become too much and lose its special feel. But it’s the exact opposite of what’s happened. I feel we’re the lucky side to be able to play in a team event every year.”

When Woods and Mickelson were younger, there was more of an edge between them. Their discomfort with each other was captured in their awkward pairing at the 2004 Ryder Cup at Oakland Hills. The pairing was team chemistry poison.

That’s changed. Woods is 37 now, Mickelson 43. They’re the heart and soul of the American international teams now. Haas, as an assistant captain over the last three Presidents Cup, has watched their chemistry evolve.

“They are obviously very different personalities,” Haas said. “They needle each other, but I don’t think either one of them is offended by it. They’re having more and more fun together.”

Of course, it’s the winning that ultimately makes Presidents Cup week fun, and the United States is the powerhouse in this event. Sunday’s victory boosts the American record against the Internationals to 8-1-1.

And as much fun as the Americans were having this week running up a huge lead, the Internationals made a hard run in singles Sunday and brought back some familiar fears. The Americans blew a 10-6 lead in the singles at Medinah. The idea the Internationals could come back from a 14-8 deficit grew until Woods finally secured the clinching point in the day’s ninth match.

“It was a tough day,” said Steve Stricker. “There was a scenario brewing much like the Ryder Cup last year, coming down to the end. I think we can all take positives from this going forward.”

Stricker took last year’s loss hard. Europe’s Martin Kaymer beat him at the 18th hole in Sunday singles to clinch the matches. Stricker didn’t have his best game that week. He didn’t win a single point. He hurt thinking he let his teammates down.

So, yes, Sunday’s victory at Muirfield Village was a tonic. Nine of the 12 players on last year’s Ryder Cup team were on this Presidents Cup team.

“Last year still stings,” Stricker said. “If you ask the guys who were on that team, I guarantee every one of them would think that last year at the Ryder Cup still hurts a little bit. So I think it was a good step for all of us to win again.”

More than a year removed from Medinah, the Americans have a lot to feel good about.

Woods reclaimed the No. 1 world ranking back in late March, ending a nearly two-and-a-half year run of Europeans atop the Official World Golf Ranking. He won five times and was the PGA Tour Player of the Year. He isn’t alone among Americans making their marks. Seven of the top 11 players in the world rankings are from the United States. Americans won the first 14 PGA Tour events of this year, 31 of the 40 played. Americans Mickelson and Jason Dufner won the last two majors. Jordan Spieth was the PGA Tour Rookie of the Year.

Really, all that’s missing for the United States to lay a dominant claim on the world’s game is that elusive Ryder Cup.

Somewhere Sunday, Tom Watson had to be beaming. Winning is an American habit in professional men’s golf just about everywhere that matters, except in the Ryder Cup. Watson will be aiming to change that when he leads the United States to Gleneagles in Scotland next year.

The next American Ryder Cup captain has to like what unfolded at Muirfield Village. Woods found another partner in Kuchar. Mickelson and Keegan Bradley continued to gel as winning partners. Spieth, just 20, fared well in his baptism in international team competition. The youngest member of this American team looks like he will be on U.S. rosters for a long time.

If the Americans can keep this Presidents Cup mojo, they might not hear “ole, ole” at the end of the next Ryder Cup, either. That would be the best tonic of all for U.S. PGA Tour pros.