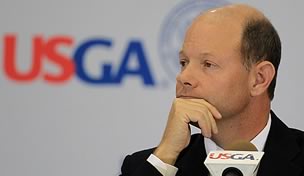 Mike Davis was back in action Wednesday cleaning up another mess.

You remember the U.S. Golf Association’s executive director springing into action this summer after the Jungle Bird barged into the U.S. Open trophy presentation at The Olympic Club. Davis looked like a professional wrestler putting a modified crooked lariat on the goofy cuckoo while strong-arming him into a bunker on national TV.

Davis is boldly stepping up to protect the game yet again this week, this time tag-teaming with Royal & Ancient chief executive Peter Dawson to bounce another obnoxious intruder off the sport’s stage.

They’ve teamed to rid the game of all anchored strokes, most notably anchored putting.

This time, though, the squawking won’t be so easily muzzled.

This time, the mess won’t be cleaned up so swiftly, not with so many untidy questions left in the wake of a proposed new rule.

Quite cleverly, the USGA and R&A are not specifically banning anchored putting. Instead, they have proposed a new definition of what constitutes a swing or a stroke, Rule 14 1-b. Essentially, the new rule doesn’t allow anchoring a club to the body while making a stroke, though it provides an exception to resting a club against the forearm, the way Matt Kuchar does when he putts.

The new rule would prohibit sticking a belly putter in your abdomen the way Keegan Bradley, Webb Simpson and Ernie Els did while winning three of the last five major championships. The new rule would also prohibit a player from pinning his hand against his chest while using a long putter the way Adam Scott does.

“For decades now, there has been controversy over this issue,” Davis told Golf Channel. “It’s been a divisive issue.

“Fundamentally, it is really important to have this structure, to have this definition in the game, and once and for all, put this controversial issue, that just won’t go away, to bed.”

It should be noted that the governing bodies won’t officially move to adopt this rule until the spring. They have placed a three-month period in place to allow for more conversation and commentary on the proposal. But don’t be fooled, it will be a huge upset if the proposal doesn’t become law on Jan. 1, 2016, when the Rules of Golf are scheduled for an update.

“Our objective is to preserve the essential skill and challenge of the game of golf,” Dawson said.

Writing this new rule is the right move by the USGA and R&A, but it’s also an indictment of both of those organizations. It’s an indictment of a failed watch in allowing anchored putting to become so vital to so many players’ games for so long.

“We have looked at this from all angles, and we really do believe as the governing bodies this is what we should do,” Davis said. “If we don’t do something we know is right, shame on us.”

Yes, admirably stated by the USGA chief in his second year at the helm, but there ought to be some shame in the fact that it took this long for the guardians of the game to make their stands. How long do you get to fix an incorrect scorecard before the nobility in doing so is diminished?

Still, there’s courage in finally stepping up to get this right.

It’s the right move because the game’s great championships are as much a test of nerve as they are a test of skill. Explaining why anchored putting is wrong in that regard stumbles into the same trouble the Supreme Court encountered in defining pornography. Like Justice Potter Stewart said in 1964, we purists may not be able to articulate exactly why we think a stroke is improper, but 'we know it when we see it.”

The hands are the great transmitters of nerves at the end of championships, and the anchored putter allows a player to diminish the importance of the hands in the putting stroke. That makes for an uneven playing field with prized trophies on the line. We can’t prove it, and neither can the USGA and the R&A, and that’s probably why they aren’t even trying.

Quite cleverly, the USGA and R&A aren’t making their argument for the rule change based on the fact that players using anchored putters are winning more big events. Smartly, they’re avoiding the complications in doing that.

“We cannot honestly say to you that for some players in some situations, it is not an advantage,” Davis said. “What we are really saying is when we write the playing rules, it is never about the advantages or disadvantages, or whether something is making the game easier. We are just defining the game. We are trying to get back to where the game used to be [before anchored strokes].”

If you believe the USGA and R&A, the fact that three of the last five major championships were won with anchored putters is coincidental.

“This is not a performance related decision,” Dawson said.

So what prompted the rule proposal?

“The `Why now?’ answer is there really has been a change the last two years,” Davis said.

“In the last 18 to 24 months, there has been a tremendous spike in the usage of anchored strokes,” Davis said. “That is really why we have taken a fresh look.

“All of a sudden, we not only have seen usage on the PGA Tour go up dramatically, we have seen it in amateur events and junior events. It’s like everything else, it starts with elite players and works its way into the recreational game.

“There are a lot more long putter and belly putter sales, and there is also a growing advocacy as well. We are hearing prominent instructors say this is a better way to putt.”

The USGA can cite research showing how many more PGA Tour pros use anchored putters today. Davis said 2 to 4 percent of PGA Tour pros used them in the ‘80s and ‘90s, but that went up to 6 percent a few years ago and jumped to 11 percent last year and 15 percent this year.

The USGA cites no controlled studies or experiments or research to support its argument that a new definition of a stroke is needed, and that will make the decision feel arbitrary to critics. It’s the Justice Potter Stewart deal. The USGA and R&A know wrong when they see it, and they saw the game changing quickly in ways they don’t like.

They saw a future with a lot more long putters in it, and they didn’t like it, didn’t think it was where the game was meant to go. The bottom line is that the rule change is based on that opinion.

“To be honest, we are concerned the anchored stroke could supplant the traditional putting stroke,” Dawson said. “We don’t feel this is a golf stroke.”

That’s the right call, even if it makes the USGA and R&A look like they were asleep at the switch in guarding the future of the game. They’ve awakened us all with this long overdue move.