Vegas back from shoulder surgery, rehabbing confidence at Honda 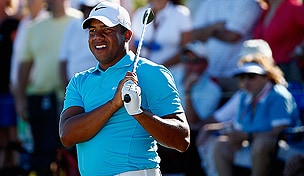 Now Johnattan Vegas is stepping up rehab on his confidence.

The shoulder is feeling stronger, and there would be no better therapy for rebuilding his confidence than making a run Sunday at winning the Honda Classic.

That’s how it works. When you have an injury like Vegas tried to play through the last couple years, a torn tendon that won’t allow you to play to your strengths, your confidence can’t help but need some repairing, too.

With a 4-under-par 66 Saturday, Vegas moved into position to win his second PGA Tour title, to add to his breakthrough victory at the Bob Hope Classic three years ago. He likes the work he has done to give himself this chance.

“I feel confident, I feel ready,” Vegas said after signing his scorecard.

Vegas, 29, sits in fourth place, four shots behind Rory McIlroy. A bogey at the last Saturday disappointed him, but he liked the way he felt getting into contention again.

“It felt phenomenal,” Vegas said. “The adrenaline was rushing, and it was fun. It's fun feeling this way. That’s why I'm here.”

A rookie from Venezuela via the University of Texas and the Nationwide Tour, Vegas broke through to win the Bob Hope Classic in 2011. He beat Bill Haas and Gary Woodland in a playoff in his second start his rookie season.

A second PGA Tour title has proved elusive, especially with his left shoulder beginning to ache and doctors unable to detect the cause.

Vegas began feeling pain in his left shoulder not far into his second PGA Tour season.

“It just kept getting worse and worse, the more I played,” Vegas said.

There was frustration the deeper he got into 2012, in going from doctor to doctor looking for a cause and getting no answers.

“It was hard to find,” said Bobby Kreusler, Vegas’ agent. “The way the tear was, when they laid him down to do an MRI, with his shoulder at his side, the tear flapped back in place, and you couldn’t see it.”

Vegas couldn’t understand why the source of the pain wasn’t showing up.

“It took them a long, long time,” Vegas said. “That’s kind of when I was frustrated.”

Late last summer, when he was finally back to hitting full shots, Vegas couldn’t contain his excitement and called his caddie, Louis Sira.

“I’m hitting the ball like I never have before,” Vegas told Sira. “I’m pain free. I haven’t felt this good in a very long time.”

Sira could feel what Vegas was feeling.

“He was relieved,” Sira said.

Vegas teed it up last fall in the 2013-14 PGA Tour season opener with a major medical extension. He was granted 21 starts to make $595,483 and keep his tour card. Though he missed the cut in that first start at the Frys.Com Open, he hasn’t missed a cut since, making seven straight now. He has made $107,543 so far and will be looking to pad that on Sunday at PGA National.

His confidence started coming back making all those cuts.

But Vegas knows what that's like closing out his first PGA Tour win in dramatic style in a sudden-death playoff. 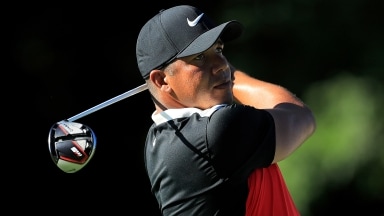