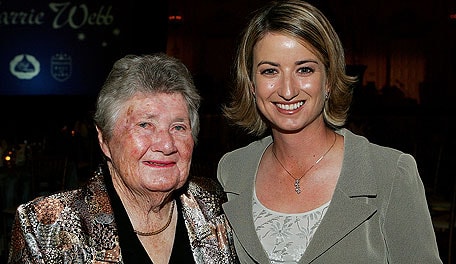 Louise Suggs couldn’t help seeing a little of herself in Karrie Webb.

They shared a feisty tough-mindedness that made them kindred spirits.

Maybe that’s why one of the 13 founders of the LPGA became such good friends with the rookie from Australia almost from the first time they met nearly 20 years ago.

No active LPGA player today was closer to Suggs than Webb, who now more than ever appreciates the special legacy Suggs leaves with Suggs’ passing Friday at 91.

“Louise never had children, but I think the LPGA and all of us were her children,” Webb told GolfChannel.com. “That’s the way Louise looked at it.”

In the moments after Webb won the Titleholders at LPGA headquarters in Daytona Beach, Fla., in 1996, Suggs introduced herself. A firecracker of a personality, Suggs couldn’t help telling Webb that the $180,000 first-place check Webb just won was more money than Suggs earned her entire career.

“I didn’t even know how to respond to that comment,” Webb said. “I had very little knowledge of the LPGA the beginning of my rookie year. I knew the basics, but to actually meet one of the founders of the LPGA early in my rookie year, to hear her make that comment, I think there was instant respect. I realized I really needed to understand where we came from and who helped us along the way.”

A few months later, Beth Daniel invited Webb as a guest for Thanksgiving at Daniel’s home in South Florida. Suggs was there, too. Fifty years Webb’s elder, Suggs was full of passion for the game, full of rich stories told in only the way Suggs could tell them.

Photos: Louise Suggs through the years

“She was feisty and opinionated and passionate,” Webb said. “I think maybe I have some of those traits, and I guess I like to think that’s why we were as good of friends as we were.”

Through Suggs and Daniel, Webb gained more than an understanding of how the LPGA was built and who built it. She gained a sense of responsibility. It would lead to Webb’s taking a leadership role in the tour’s governance. Webb’s four-year term on the LPGA’s board of directors ended last year, but she remains an important, respected voice.

“Beth and Louise taught me so much about the history of the LPGA,” Webb said. “They gave me a greater appreciation for everything we have now.”

Webb spoke to Suggs for the last time from Scotland on the Sunday of the Ricoh Women’s British Open. Though Suggs wasn’t able to travel to LPGA events the last couple years, she continued to actively follow the tour.

Webb knew Suggs was struggling and that she had taken a bad turn the last couple months.

“I think I knew it would probably be the last time we talked,” Webb said. “We pretty much said our goodbyes.”

Webb continued to call Suggs when she returned to the United States, but it was mostly to check up on her, with Suggs unable to speak on the phone. Webb’s admiration for Suggs goes beyond the amazing playing record, Suggs’ 61 LPGA titles and 11 majors. It goes to what Suggs won for every player with her dedication to the tour at large. Suggs served as the second president in LPGA history, following Patty Berg. Suggs led the tour in that role from 1955-57 with fellow founder Marilynn Smith as the tour secretary.

“Marilynn has always said that Louise had a great business mind, and they were very lucky during those years that Louise was president, that she did such a great job,” Webb said. “She said those were the years the tour really got a firm foothold.”

Webb saw the call to service in Daniel, too.

“Beth served as president during the peak of her playing career,” Webb said.

Those examples led Webb to serve.

“It was something I knew I should do, but also something I wanted to do, not just to say I’m a board member, but to be an active participant, and to try to make the tour better,” Webb said.

That’s the legacy Suggs left Webb. They spoke a lot through the years, but Webb doesn’t have to rely solely on her memory to hear Suggs’ gravelly voice, her spirited humor. Suggs used to leave voice mails on Webb’s answering machine that were so memorable Webb could never bring herself to delete them.

“I have a ton of voice messages,” Webb said. “I’ll have to work out how to get them off and preserve them.

“Every message is very similar. She would be calling to congratulate me, and she would say, just remember, `I taught you everything you know.’ She always joked around that she taught me everything I know.”

Suggs’ lessons live on through Daniel, Webb and all the players Suggs considered her LPGA children.