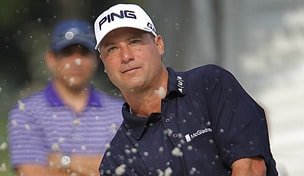 Getty Images
Trailing by one, Woods <a href='http://www.youtube.com/watch?v=1U3JCwaeoBE' target='_blank'>chipped in for birdie</a> on the par-4 16th to tie for the lead. It was vintage Tiger. He went on to win the tournament. (Getty)  -

PGA Tour Q-School could always be counted upon to deliver a defining moment.

All the angst, tension and misery that made that hellish week so distinct from anything else in sport always seemed to crystallize itself into some poignant ending.

The last hour of Q-School could be like the theater of the absurd with mounting pressure making for some of the craziest finishes.

In 1976, Curtis Strange bogeyed his final three holes to miss getting his PGA Tour card by one shot.

In ’98, Todd Demsey needed only to two-putt from 10 feet to claim his card and three-putted.

In ’99, Jaxon Brigman shot 65 to earn his PGA Tour card, or so he thought, until learning he mistakenly signed for a 66 and missed out by a single phantom shot he never hit.

In ’04, Joe Daley watched a 4-foot putt in the fourth round go more than halfway into the cup only to hit the metal edging inside the cup and spring back out. The metal portion of the cup had been inserted crooked. Of course, it would haunt him in the final hour as he missed getting his card by one shot.

A guy could go on and on with these stories, but this is a new era, with the end of PGA Tour Q-School a year behind us and a new day dawning.

Welcome to Web.com Tour Championship week, the final event in the Web.com Tour Finals, the new series that replaced Q-School. Essentially, what the final stage of Q-School accomplished in six days has been spread over four tournaments with the awarding of 50 cards coming down to this week’s competition at the TPC Sawgrass Dye’s Valley Course in Ponte Vedra Beach, Fla.

Three-fourths into the new series, we can safely say this new model has yet to seize the imagination the way Q-School did. The same sense of wonder, or of imminent demise, isn’t there. Not yet, anyway. The drama that built so intensely over six days at Q-School hasn’t built the same way over the first three weeks of the Web.com Tour Finals. Then again, the true measure of Q-School’s worth came racing at us in that final hour or so of competition. So this new series can’t truly be judged until we reach its final hour.

This new model has brought together the top 75 players on the Web.com Tour with players who finished Nos. 126-200 on the PGA Tour money list this year. Twenty-five of the 50 cards that will be awarded on Sunday have already been secured by the top 25 money winners from the Web.com Tour’s regular season. That’s part of this event’s problem in delivering dramatic storylines to date. The Finals’ money list is just confusing enough to tempt an ordinary golf fan to turn the page.

To see who’s really fighting for the remaining 25 Tour cards this week, you have to sift through the 25 who have already secured cards but are continuing to play to improve their priority ranking for access to events next season.

As it stands today, Steve Wheatcroft is 37th on the Web.com Tour Finals money list, but he’s 25th among players who have yet to secure their cards. He’s the popular “bubble boy” going into this week, the last guy who would win a card if they were awarded today.

You still with us? Or have you turned the page?

At any rate, the 50 card winners coming out of the Web.com Tour Finals will be eligible to play in the start of the 2013-14 season in two weeks at the Frys.com Open at CordeValle Golf Club in San Martin, Calif.

The lack of drama playing out so far may have something to do with the fact that roughly 40 of the 50 cards were virtually locked up through the first three events.

Trevor Immelman locked up his card for next season winning the series opener, the Hotel Fitness Championship. Pretty much everyone who finished top 5 in any of the first three events has already locked up their cards for next season. Andrew Svoboda won the second event of the series, the Chiquita Classic, and Seung-Yul Noh won the third event, the Nationwide Children’s Hospital Championship. While Immelman and Svoboda are playing this week’s Web.com Tour Championship in bids to improve their overall priority ranking on the Tour Finals money list, Noh is taking the week off. Noh leads the Finals money list with $210,125 in earnings with Svoboda ($186,466) second and Immelman ($180,000) third.

The top money winner (as well as regular season No. 1 Michael Putnam) will get preferred status and an exemption into the 2014 Players Championship.

The real angst is being felt among the bubble boys in line to grab those last 10 or so cards available. While Wheatcroft holds that last spot at 37th on the Finals money list, it’s all bunched up just in front and behind him. Here’s what it looks like around the bubble:

So what’s this new qualifying series really all about? How is it different, or the same, as Q-School?

That’s what Sunday will be all about for the folks with a ticket or who tune in to watch the telecast. A lot of us will be watching to see if the Web.com Tour Finals delivers its defining moment. That's how we'll measure it against Q-School's legacy.