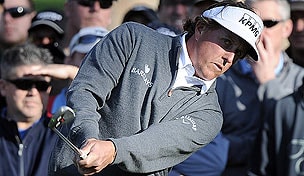 Getty Images
PONTE VEDRA BEACH, FL - MAY 08: Tiger Woods looks on from the sixth hole during the second round of THE PLAYERS Championship on THE PLAYERS Stadium Course at TPC Sawgrass on May 8, 2009 in Ponte Vedra Beach, Florida. (Photo by Sam Greenwood/Getty Images)  -

Other players call it a wedge.

Whatever you want to call it, there must be something mystical in the scoring club’s composite materials with Mickelson able to make his ball look like it’s defying gravity at Riviera this week.

That’s exactly what Mickelson’s hole-out looked like at No. 8 near the end of the second round. The shot fueled his bid to win back-to-back PGA Tour events, to win wire to wire this week.

From 110 yards out, Mickelson put some clever action on his L-wedge, getting his ball to spin sideways into the hole for eagle.

“He looked at me yesterday and said, `I’m OK with a wedge,’” Kyle Stanley said.

The quip made Stanley laugh. It was like hearing Itzhak Perlman say he’s OK with a violin.

“Phil is playing as good as I’ve seen him in awhile,” said Brandt Snedeker, who also played alongside Mickelson. “He’s driving the ball well. He’s not hitting any crazy ones, and his short game is phenomenal.”

With a 1-under-par 70, Mickelson used some sleight of hand to keep himself atop the leaderboard.

There’s no other way to explain how Mickelson holed that shot at the eighth.

“I’ve been struggling [with Riviera’s greens],” Mickelson said. “When I expect the greens to release, they are stopping. When I expect them to stop, they are releasing. I was afraid if I went at that pin, I could easily go long and all the way down that hill. Rather than take a chance, what I tried to do was sling-hook an L-wedge, and try to side-spin it towards the hole. It kind of side-spun right in the hole.”

“You put a wedge in his hand, and he has a pretty good chance of making it,” Snedeker said. “I don’t think his confidence is ever really an issue. He thinks he can hit every shot at all times.”

Mickelson’s magic included getting away with some misses, thanks to his wedge and short game. He left Riviera after a morning round to fly his jet back to his home in Rancho Sante Fe, just 75 minutes away. He wanted to be back to work in the four-acre short-game practice facility he has in his backyard. He said he wanted to work on his putting. He missed a 4-footer for par at the 18th, a 5-footer for par at the ninth in his final hole.

“I wanted to score low,” Mickelson said. “I played well enough, but I didn’t give myself chances to really go much lower. I ended up probably getting a pretty good score the way I played.”

Mickelson is hard to beat with the lead. He has won the last four times he has held a 36-hole lead in a PGA Tour event, six of the last seven times.

“I put myself in contention heading into the weekend, which is what my initial goal was,” Mickelson said. “I’m right in the thick of it. I’ve got to go out and shoot some low scores, because they’re out there.”