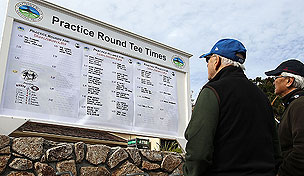 Getty Images
PONTE VEDRA BEACH, FL - MAY 08: Jordan Spieth plays a shot from a bunker on the third hole during round two of THE PLAYERS Championship at the TPC Sawgrass Stadium course on May 8, 2015 in Ponte Vedra Beach, Florida. (Photo by Sam Greenwood/Getty Images)  -

They’re re-thinking how best to prepare for golf’s biggest events.

The game’s best players are finding their schedules becoming more complicated and challenging as golf’s “world tour” continues to evolve.

We’re seeing these challenges making an impact on the West Coast swing while bolstering the Florida swing. Tiger Woods and Phil Mickelson look like they will both make their fewest West Coast swing starts ever.

Woods may end up playing just once on the West Coast, Mickelson just three times.

Age and health are functions of new scheduling choices for Woods and Mickelson, but there’s more to it than that.

“The year basically gets pretty congested for most of the players, starting at the British Open, and some who play the week prior to the British, because then if you play the British Open, then usually some guys have to go play Canada,” Woods said last week. “For me, I take that week off, but then it's Firestone, then it's the PGA, then a week off, then all four playoff events, and then for the Americans, there's a Ryder Cup and a Presidents Cup every year ...

“Now, with this new wraparound schedule going on, I think we're all trying to get our heads literally wrapped around it, and trying to get a feel for it. I don't know how far behind I was in FedEx Cup points when I came back, but Jimmy Walker already has won twice with this new scheduling system. It's very different.”

It’s another new twist players are figuring out.

Adam Scott is amid a six-week break. He’s skipping the entire West Coast swing for the first time since he joined the PGA Tour in 2003. He won’t tee it up again until the Honda Classic in three weeks.

“There’s got to be a break somewhere,” said Scott, who made the most of the Australian swing in December. “You can’t continue to perform at the level you want if you play all the time.”

Graeme McDowell is making his first start of 2014 at the AT&T Pebble Beach National Pro-Am this week. He’s ending a 10-week break.

McDowell could be speaking for a lot of players.

With the PGA Tour’s new wraparound schedule, with rich international paydays waiting late in the season, the beginning of a new year is looking like the best time for elite players to get some rest.

Mickelson is skipping the Northern Trust Open in Los Angeles, usually a staple on his schedule. He’s also skipping the WGC-Accenture Match Play. He has played as many as six West Coast swing events before the Masters in the past. This year will mark the first time he’ll play fewer than four times on the West Coast swing.

Woods is off to a sluggish start in great measure, it appears, because he took some extra time off in the offseason to rest. It’s carrying over to fewer starts on the West coast swing and fewer pre-Masters starts.

With Woods looking as if he’ll join Mickelson in skipping the WGC-Accenture Match Play Championship this year, it appears Woods will play just five times leading into this Masters, just once on the West Coast swing, his fewest starts out there. Well, that’s not counting 2010, when he was coming back from his personal woes and didn’t play anywhere before the Masters. Woods, Mickelson, Scott and Rory McIlroy are all scheduled to play Honda and the WGC-Cadillac Championship on the Florida swing.

With Woods 38 now, age is part of the function of his changing schedule. So is his health. The nature of the changing “world tour” is also a factor, with so many big events late in the summer.

So much has changed since Woods joined the Tour in ’96. With the launch of World Golf Championship events, with the creation of the FedEx Cup playoffs, with lucrative international opportunities growing late in the year, scheduling choices have expanded.

And the game’s best are still figuring just what their best choices are. So, expect more juggling and experimenting.