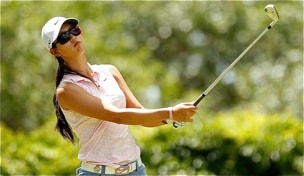 COLORADO SPRINGS, Colo. – Michelle Wie ignited the largest roar of this U.S. Women’s Open when she rolled in a 35-foot putt for birdie at the 18th hole Saturday at The Broadmoor.

You would have thought the putt was for the 36-hole lead.

But it was a putt to make the cut.

Grinding all day to make it inside the cut line, Wie’s joy was palpable after she made the putt, as strong as the fans who cheered her there.

After opening with a 78, Wie battled along the cut line all day. Going to the 18th green, she knew what she needed to do to make the cut. She couldn't help knowing.

With the closing birdie, Wie shot even-par 71 in the second round to finish right on the projected cut line at 7 over.

“I’m really proud of myself for making it,” Wie said.

The statement made apparent the pressure Wie must be feeling this week. She started the week trying to turn around her U.S. Women’s Open fortunes. Since tying for third in 2006, Wie’s record in the championship reads like this: WD, MC, MC. She failed to qualify for the championship in 2009.

Focus on Wie this week included Annika Sorenstam’s candid assessment of Wie’s career to date. Sorenstam said she didn’t think Wie has lived up to expectations and that her focus isn't strong enough on golf. Wie is attending Stanford, where she’s a senior.

“Sometimes, you wonder if she's mentally strong enough to finish at the top,' Sorenstam said.

Wie was asked Saturday if golf fans should expect the best from her while she’s still attending Stanford.

“I think a lot of people have been talking about that recently,” Wie said. “But going to school is definitely one of my biggest dreams, going to Stanford, getting an education there and getting my degree.

“But at the same time, I am a professional golfer, and I am putting that as a priority, even when I'm at school. If I have a choice between having to study or having to practice, I choose to practice.

“It's my career, so that's especially important to me. But at the same time, I think getting an education is also important, as well.

If Wie’s putting improves, she might look mentally stronger to Sorenstam. It’s been an issue in the two-time LPGA winner’s bid to win a major. She struggled with her putter at the Wegmans LPGA Championship two weeks ago. She took 35 putts in the first round at The Broadmoor this week. She took 31 in the second round with more than one lip-out.

“I hit some good putts out there, a lot of putts in the middle that should have gone in,” Wie said. “I missed a lot of short ones, as well.

“Hopefully, I can just make a lot more birdies. I learned from my mistakes on Thursday, so I'm feeling good about it.'