Will stars finally align for Sergio in a major? 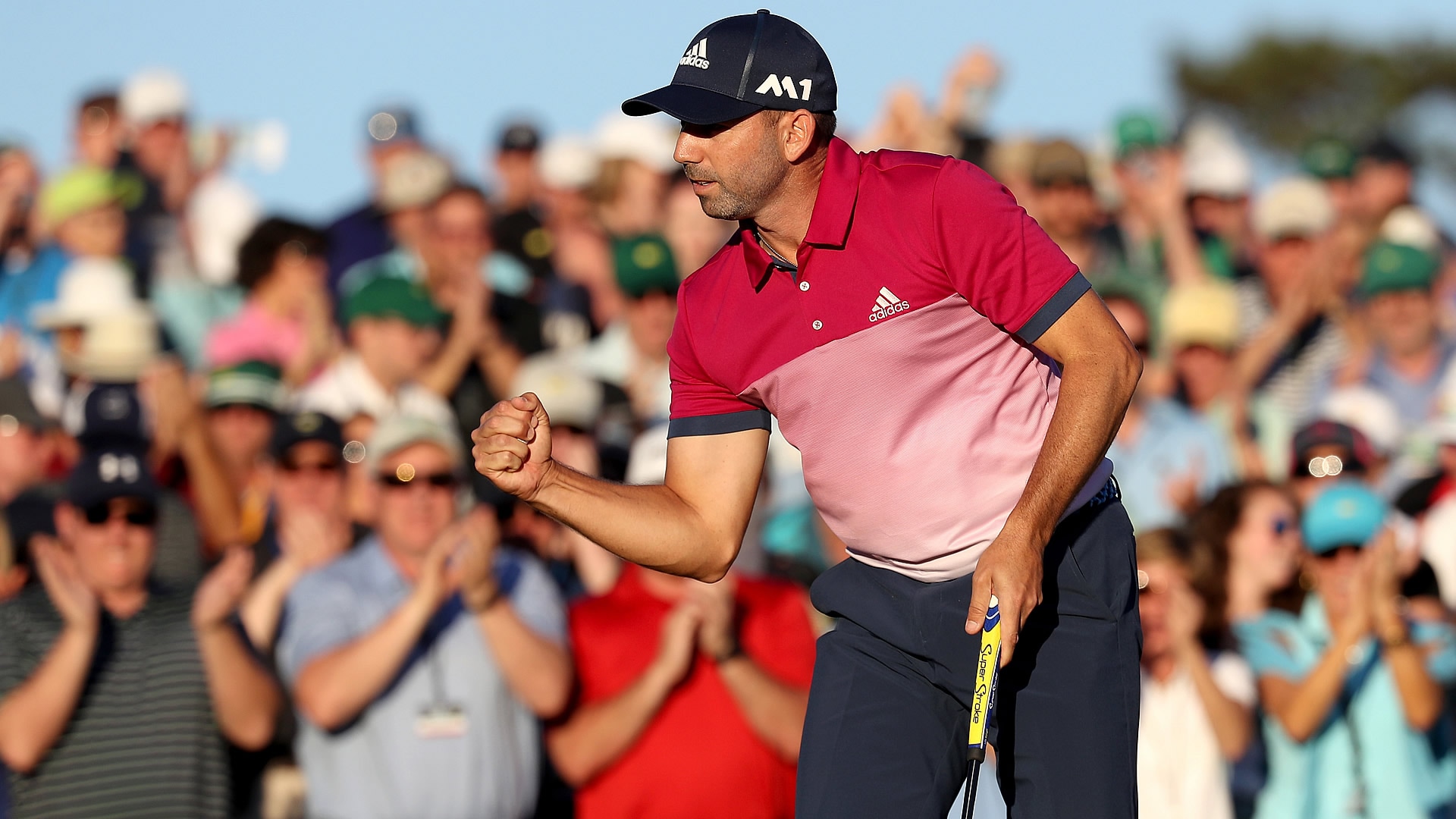 AUGUSTA, Ga. – Maybe Sisyphus gets a reprieve in golf’s retelling of the story.

Maybe this Sunday is that epic for Sergio Garcia, who must know the frustration of the mythic king the Greek gods compelled to roll a boulder up a hill, a damned task in that the king spends eternity trying over and over to roll the boulder to the top, only to see it roll back down without ever reaching the peak.

That’s how major championships have gone for Garcia, and yet here he is going to Sunday at Augusta National with his game and maybe even something cosmic working for him in the final round of the Masters.

Sunday, after all, will be a special day for Spaniards in golf.

It would have been Seve Ballesteros’ 60th birthday.

There are so many terrific stories lining up to be Sunday’s defining tale, but would any be more stunning than the 37-year-old Garcia slipping into a green jacket?

With a 2-under-par 70, Garcia seemed to finally break the Saturday curse plaguing him at Augusta National. He moved into a share of the 54-hole lead with Justin Rose and will go off with him in Sunday’s final pairing.

“At the end of the day, it comes down to me making sure that I keep doing the things that I've been doing all week and just believe that I can do it,” Garcia said.

Once the can’t-miss kid, the gifted prodigy who seemed destined to win multiple majors, even Garcia seemed to give up on himself and any chance he would finally break through.

Wasn’t it here that we all gave up on him winning one?

This is where Garcia practically shook his fist at the heavens and cursed the golf gods.

It’s where he declared he wasn’t good enough to win a major.

“I don’t have the thing I need to have,” he said here five years ago. “The conclusion is I need to play for second or third place.”

Maybe this is where he finally makes his peace with the golf gods. Or maybe where they break his heart again. They certainly smiled on him Saturday with the gift they gave him down at Amen Corner.

That’s where Garcia rocketed a 4-iron that slammed into the grassy bank in front of the 13th green. That ball looked doomed to roll back down into the tributary of Rae’s Creek there, but it seemed to defy gravity, much like Fred Couples’ ball did when it stayed up on the bank above Rae’s Creek at the 12th when Couples won in 1992.

“I've definitely had some good breaks throughout all three rounds,” Garcia said. “The 13th was obviously was one of them.  ”

Instead of bogey or maybe worse there, Garcia took advantage. He chipped up to a few inches and made birdie.

Garcia finished strong, holing a pivotal 6-foot putt for par at the last to secure his share of the lead.

Garcia looks like a different man than he was five years ago, when he ranted at the Masters over another lost opportunity in a major. He’s engaged to be married to Angela Akins in July. He says there’s more balance and perspective in his life and game now.

“My mentality has kind of changed a little bit, the way I’m thinking things, particularly this week at Augusta,” Garcia said.

Garcia says his once rocky relationship with the Masters is different, too.

“It’s definitely improved,” Garcia said. “There's no doubt about that. Nothing wrong with Augusta. It's the kind of place that if you are trying to fight against it, it's going to beat you down. So you've just got to roll with it and realize that sometimes you're going to get good breaks, like has happened to me a few times this week, and sometimes you're going to get not‑so‑good breaks.  But at the end of the day, that's part of the game.”

Garcia came into Saturday with the worst third-round scoring average of any player over the last 30 Masters. He was cumulatively 38 over par for his career in the third round of this event.

“I’m glad I took the scoring average down a little bit,” Garcia cracked.

Garcia idolized Ballesteros, and he will draw inspiration trying to win the Masters on what would have been his idol’s birthday.

Amen Corner looked like it was jumping with spiritual activity Saturday.

That’s where Jordan Spieth invoked the name of Arnold Palmer after he drove into the trees and pine straw at the 13th. It’s where Spieth shrugged off his caddie’s advice.

“What would Arnold do?” Spieth told caddie Michael Greller before lasering a shot into 30 feet that would set up a two-putt birdie.

Garcia could ask a similarly inspiring question throughout Sunday. He could ask “What would Seve do?” Ballesteros won the Masters in 1980 and ’83. Garcia’s other idol, Jose Maria Olazabal, also won the Masters twice (1994 and ’99).

“I don't want to get ahead of myself,” Garcia said. “I don't even know how much it would mean to be able to join both of my idols as a Masters winner.”