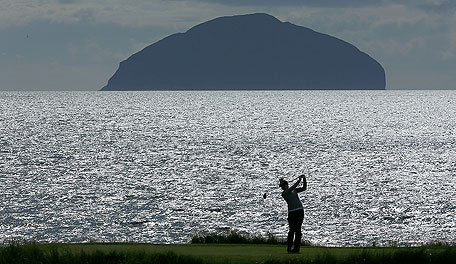 TURNBERRY, Scotland – The sun broke through the clouds spectacularly Wednesday morning at Trump Turnberry with the best in the women’s game making their way around the venerable course in their Ricoh Women’s British Open practice rounds.

With the gloom that pressed down in Tuesday’s rain lifting, the real beauty of the rugged coast of the Firth of Clyde shone through for all those players making their first appearance here to marvel over. The giant rock island Ailsa Craig and the iconic lighthouse emerged formidably from the gray mist as the signature backdrops for those who couldn’t quite make them out in the murk earlier in the week.

There’s an aura to this place, from Scotland’s ancient traditions to the history made on this golf course, and there are 144 players here who want to be part of it.

Come Sunday, a champion will add another chapter to Turnberry’s story.

“Just for us to be playing on this venue, where it’s in the men’s traditional rotation, it’s huge,” said Stacy Lewis, the 2013 Women’s British Open champion. “It’s a place we should be playing. I’m excited for the challenge, just to be part of the history here.”

Given fewer chances to play the game’s most celebrated major championship venues, the best in the women’s game are eager to be part of the stories of all of golf’s iconic venues.

Karrie Webb became a part of Turnberry’s story in 2002, when she won the Women’s British Open the first time it was played here. Before her, the men made their marks with Tom Watson winning in 1977, Greg Norman in 1986, Nick Price in 1994 and Stewart Cink in 2009.

Watson beat Jack Nicklaus at Turnberry in that brilliant battle dubbed “The Duel in the Sun,” and then nearly won it again in ’09, falling to Cink in a four-hole playoff. Norman was an idol to fellow Aussie Webb, and Price was one of her favorite players growing up.

“It’s wonderful to be back and relive some of the memories,” Webb said.

Webb won the “Super Slam” at Turnberry, with the Women’s British Open the fifth different major she claimed in her career.

“I just wanted to win here on such a great course,” Webb said. “I just loved it as soon as I got here.”

While the U.S. Women’s Open occasionally visits classic venues loaded with history the men’s game created, the Women’s British Open now regularly rotates its venues among the sites the men use. From St. Andrews to Carnoustie to Royal Birkdale and Royal Lytham & St. Annes, the women are becoming part of the stories those clubs tell.

Michelle Wie said playing Turnberry is one of her “bucket list” items. The course originally opened in 1901.

“I’ve kind of been in awe of the place the last couple days,” Wie said.

This week also offers a rare links test for LPGA pros who don’t see these courses and conditions on the rest of their schedule.

“I love this tournament,” Lewis said. “I love the challenge of it. I like that the weather is going to be nasty all week.”

Turnberry will play as a par-72 layout this week at 6,410 yards. It plays as a par 70 when the men play the British Open here. Webb closed with a 66 in the final round to win in ’02. She finished at 15 under overall, winning by two shots. Webb said the course doesn’t seem to be playing any longer than it did in ‘02, and she’s right. It was listed at 6,407 yards for the Women’s British Open the year she won.

“I shouldn't say it’s the easiest, but the most playable of all the links courses, I think,” Davies said. “The bunkers are there and you know they are there, but you have always got a side you can head for.”

Earlier this year, Donald Trump announced plans to stiffen the course’s defenses, with the Royal & Ancient closely consulted in a design makeover set to begin after the Women’s British Open. The changes will include five new holes (at the sixth, ninth, 10th, 11th and 14th). The new design is intended to take better advantage of coastal views . The course will go from a par 72 for daily play to a par 71 and will feature five par 3s.

“All the par 3s are going to be fantastic, because they are moving all the greens out onto the dunes,” Webb said. “On a bad, windy day, the course will just be impossible, but it will be stunning. It’s a stunning backdrop now, but the lighthouse will be more of a part of 9, 10 and 11 ... I can’t imagine the changes won’t reflect what the course is all about.”

Turnberry’s story promises to continue to change, with the women adding another chapter of their own this week.