Yani Tseng is feeling the pressure of staying No. 1 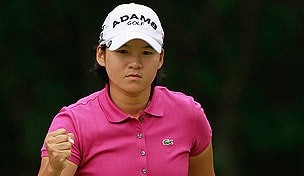 After establishing herself as the most dominant force in golf last year, Yani Tseng confessed something to her coach this off season.

She’s nervous about her 2012 debut in this week’s LPGA season-opener.

As Tseng, 23, prepared for the new season with coach Gary Gilchrist last month, she confronted head-on what looms as her most daunting challenge.

While the rest of women’s golf wonders how to beat her, Tseng wonders something else: How does she live up to being Yani?

If Tseng wins just 10 times this year, is she slumping?

It’s an over-the-top question, but it gets at the nature of what it’s like being the best in the world. It gets at what Tseng senses are the soaring expectations that await her. Next week marks the one-year anniversary of her ascension to No. 1 in the Rolex world rankings.

While Gilchrist believes Tseng improved her swing this offseason, he sees her attitude as her greatest asset.

“The most important thing you can do is prepare mentally,” Gilchrist said. “When you’ve had such a fantastic year like Yani had, there’s more pressure to perform to that level. We talked about it. I said let’s be realistic. Let’s set realistic goals. If she tries to compare 2011 to what she’s doing in 2012, her focus will get off what she needs to do.

“If you’re a jockey out front in a horse race, you’re not going to win looking behind you.”

Gilchrist likes to remind Tseng that nobody is at her best every time she tees it up.

“It’s this way. `Yani, you’re a human being. You’re not a machine. Whatever happens, learn from it.’”

And Gilchrist also likes to remind Tseng to enjoy the journey, to seek balance in her life.

On the eve of the Women’s Australian Open, Tseng sounded at peace with the new season's challenge.

She is focused on the starting line, not last year’s finish line.

Tseng begins the new season with a more efficient, more powerful swing. She and Gilchrist worked hard in the offseason on Tseng’s shoulder turn and lower body stability.

“Yani had a tendency to overturn her shoulders and get her weight left too early,” Gilchrist said.

With the help of a high-tech swing analyzer, Tseng worked on grooving a backswing that gets her more square to the target line at the top of her swing. This frees her to make a more effortless move to her left side.

“I don’t swing as hard as before,” Tseng said. “I feel I’m swinging easier and striking the ball better.”

In the final analysis, though, this season’s greatest challenge is whether she can continue to enjoy being Yani.