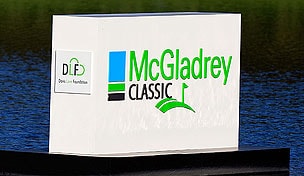 Getty Images
PERTH, AUSTRALIA - FEBRUARY 17: Paul Casey of England in action during the Pro-Celebrity event in aid of the Victorian Bushfires Red Cross appeal as a preview for the 2009 Johnnie Walker Classic tournament at the Vines Resort and Country Club, on February 17, 2009 in Perth Western Australia. (Photo by Ian Walton/Getty Images)  -

ST. SIMONS ISLAND, Ga. – Take a stroll across the grounds of Sea Island Resort, site of this week’s McGladrey Classic, and the thought occurs, 1960 called and they want their tournament back.

Relaxed would be an understatement. Quaint doesn’t exactly do this place justice.

Volunteers greet fans with a toothy, “Hi y’all.” Normal tournament staples of hot dogs and hamburgers are supplanted with fried chicken and the smoky perfection of island icon “Southern Soul” BBQ. Even the press is housed in the cozy “corn barn,” a throwback structure to a more genteel generation.

In two short years the Sea Island stop has taken southern hospitality to an extreme, but starting next season the McGladrey, and the rest of the fall lineup, make the move to the big leagues.

In 2013 the PGA Tour will go to a split-calendar schedule with what were Fall Series events, which always awarded official money but were not part of the FedEx Cup, kicking off the 2013-’14 season.

In theory this is a boost for all, with full FedEx Cup points, and possibly a Masters invitation, giving the historically sleepy fields a boost, but that’s not to say the transition will be painless.

According to one source who has seen the tentative 2013-’14 schedule, the Disney World event, a Tour stop since 1971, will not be played. The event’s sponsorship deal with the Children’s Miracle Network is over after this year and the economics of the new schedule, combined with Disney’s move out of its normal anchor position on the Tour calendar, appears to have sent the tournament into extinction.

“We’ve decided the best thing is to put all of our focus on the 2012 event, and after that we will look to the future,” Disney tournament director Kevin Weickel said this week.

But if the status quo remains unchanged the future does not appear to include a trip to Disney.

Instead, the 2013 season will end at the Tour Championship followed by an “off” week and then the Presidents Cup Oct. 3-6. The 2013-’14 slate will begin at the Frys.com Open followed by Las Vegas, the CIMB Asia Pacific Classic, WGC-HSBC Champions (both official events beginning with the 2013-’14 schedule), The McGladrey Classic and the Mayakoba Golf Classic, which has been played in February opposite the WGC-Accenture Match Play Championship in the past.

The fall fields are expected to see an improvement next year as players try to pad their FedEx Cup points before heading to the West Coast to begin the calendar year, but no one is sure exactly how much.

“It could have a possible impact on our field, but I don’t know how much,” said Mark Love, the executive director of the Davis Love Foundation which runs the McGladrey Classic. “Our field is already pretty darn strong, but what are guys going to do, go to Asia? Or are they going to stay here and play?”

According to various sources a handful of top Tour players, including Tiger Woods and Rory McIlroy, agreed to play the Frys.com Open at least once over the next three years in exchange for a competing-event release from the Tour to play last week’s Turkish Airlines World Golf Finals, but that quid pro quo hardly guarantees long-term success.

Yet how the new schedule may theoretically impact fall fields is less of a concern than the inflated reality of FedEx Cup economics. Seems there is a price for parity.

This year’s McGladrey features a $4 million purse and the Mayakoba event has a $3.7 million payout, but there is a mandate that fall purses will have to be increased to $6 million in the future to dovetail with other FedEx Cup events.

According to reports both the Frys.com Open and Las Vegas will bump their purses to $6 million starting next year and Sea Island’s current contract with McGladrey runs through 2015, which will give the event a reprieve to bolster its purse but that will only delay the cash crunch.

“It’s certainly a hurdle,” Mark Love said. “We have such a tough market to get hospitality in. We don’t get the opportunity to do big corporate packages so it will be a challenge.”

An increasingly crowded global schedule could also impact the newest members of the FedEx Cup fraternity.

The CIMB and HSBC stops promise to draw many of the game’s top names – Woods is playing this year’s CIMB event and McIlroy is in the field at the HSBC – while a new playoff-like run-up to the European Tour finale in Dubai may also cause conflict. Even the Grand Slam, a four-man unofficial event featuring the year’s major championship winners, could shoestring fall tournaments in search of players and sponsors.

“As an organizer of this tournament the Grand Slam concerns me more than the stuff overseas,” said Davis Love III, who completed his fourth stint as a player director on the Tour’s Policy Board this week and hosts the McGladrey. “There’s Bubba (Watson) and Webb (Simpson) and guys that would probably want to play here. For the benefit of the start of the ’13 season it would be nice if we could get the Grand Slam to go back to the Thanksgiving date.”

It is an odd position for Love & Co. to find themselves. An event that has made its mark as one of the coziest stops in golf now finds itself in the cutthroat world of the FedEx Cup. They have southern hospitality down to a science, but now it seems it’s time to sharpen their teeth.