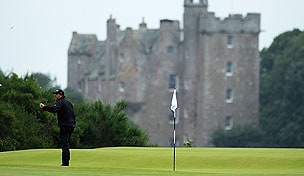 A mischievous smile twists Gary Woodland’s face and he leans into the answer like a man reluctantly offering a closely-guarded secret: “I love hitting it low, I grew up in Kansas,” he beams. “I’m excited to get this 2-iron out and get rocking.”

For Woodland, just two days shy of his first transatlantic flight and his initial taste of links golf, it will be Christmas in July. Like a half dozen or so other American Tour types bound for Royal St. George’s and next week’s Open Championship, Woodland was looking forward to the ultimate linksland tune-up at this week’s Scottish Open.

Call it on-the-job training when your job is bouncing 2-iron tee shots down rock-hard fairways and landing 8-irons 20 yards short of the green and letting Mother Nature and lunar-like topography handle the rest.

It’s an art form that is as alien to Americans as roundabouts and beans for breakfast, particularly for Woodland who will be playing his first Open not to mention his first true links course.

“I’ve never been to Europe,” Woodland said last week at the AT&T National. “I wanted to get accustomed to the time, first of all. And second of all I wanted to learn links golf. The course is a links course this year; I hear it’s awesome. That was the big factor.”

And if Woodland becomes homesick at the Scottish Open he can simply stroll down the practice tee at Castle Stuart, site of this week’s European Tour stop just outside Inverness, and chances are he’ll see a familiar face.

Included in the mini-American invasion of northern Scotland will be Phil Mickelson, Matt Kuchar, Brandt Snedeker and Ryan Palmer. All total, eight Americans are in this week’s Scottish Open. Although that’s not an entirely surprising amount considering last year’s Scottish Open featured seven Americans, it is a reality that is entirely attributed to a dramatic change of venue.

Since 1996 the Scottish Open has been played at Loch Lomond, a parkland-style layout that did little to prepare players for the unique rigors of the British Open. This year, however, officials moved the event to Castle Stuart, a 2-year-old links layout hard on the shores of the Moray Firth that looks and plays like it has been there for a century.

If this week’s field is any measure, the move has paid off.

Although the PGA Tour granted fewer conflicting event releases, waivers that allow members to compete on other circuits, (six in 2011 compared to 12 last year), the move to Castle Stuart was the deciding factor for the likes of Woodland and Snedeker.

“He plays his best golf on the hardest golf courses – the (U.S.) Open, the PGA, the  Masters and he’s going to start liking the British,” said Todd Anderson, Snedeker’s swing coach who suggested the American play the Scottish Open on his way to the season’s third major championship. “You can’t just fly over from the John Deere (Classic) and expect to play well.”

Depending on how this week, and next week, goes for Snedeker & Co., there is a good chance next year’s Scottish Open could draw even more Americans. A possibility not lost on Tour officials.

“Moving to Castle Stuart may hurt us,” conceded John Deere Classic tournament director Clair Peterson, who has bolstered his field at TPC Deere Run thanks to a chartered 767 that shuttles players from Moline, Ill., to Kent, England, in first-class comfort.

From a pure competitive point of view it’s impossible to question the logic, particularly for Open rookies like Woodland and Palmer.

“I grew up in the wind,” Woodland said. “It blows 30 (mph) everyday in Kansas. I’m used to that; the biggest thing is just getting adjusted to the time and everything. Getting accustomed to the shots, it’s a whole different ball game from out here (on the PGA Tour) where you just try to hit it a mile high.”

Getting acclimated to links golf is nothing new. Stewart Cink spent a week in Ireland playing the ancient game prior to his 2009 Open victory at Turnberry and the week before Padraig Harrington won the 2007 and 2008 Open Championships he played the Irish PGA Championship, which was played on traditional links courses.

Considering the steep learning curve for players at the Open Championship it’s a sacrifice made even more obvious by the Scottish Open’s move to Castle Stuart. All of which is bad news for Woodland because after this year there’s a good chance his secret is out on the 2-iron and the tune-up tournament.