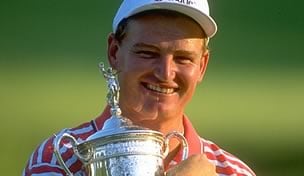 BETHESDA, Md. – From the podium on Tuesday it was virtually impossible to comprehend the road Ernie Els has traveled since the last time the national championship was played this side of the Capital Beltway.

“It was a long time ago,” Els sighs when asked to allow his mind to race back some 15 years to a different time, a dramatically different golf course and a vastly different reality. “I'm still exactly the same person as I was in ‘97, and in different ways I'm very different.”

For all we know of the 41-year-old Hall of Famer, all the major heartbreaks and heroics, imagine the crossroads the South African found himself at that sweltering June Sunday when he outdueled Congressional and all comers for his second U.S. Open bottle cap in four years.

To put it in context, Els – who back-ended his Open victory with a two-stroke walkover the next week at Westchester Country Club – had the same number of U.S. Open titles through his 27th birthday as Tiger Woods at a similar age.

In some ways he was Tiger Woods, sans the “Hello world” marketing and mind-boggling margin of victories, before the original co-opted the gig.

Jacobsen isn’t a fortuneteller, doesn’t even play one on TV, but the future he envisioned in ‘95 at St. Andrews became inextricably linked for better or worse.

Woods would win 13 more Grand Slams to go with his maiden major at the ‘97 Masters; Els would need 17 more major starts to land No. 3 and become a far-too-frequent foil on Woods’ march to history.

In 2000 Els was the Trivia Pursuit answer: who finished second to Woods at the U.S. Open . . . by 15 strokes? It’s the same year Woods completed the front end of the “Tiger Slam,” while Els was a first-round 74 at the PGA Championship away from carding the “runner-up slam,” having finished as bridesmaid at that season’s Masters, U.S. Open and British Open.

There were more near-misses to Woods at the 2004 Masters and British Open, and the duo’s overtime duel in 2000 at Kapalua was an instant classic for everyone not named Els, who lost that playoff and, some say, much more in that particular TKO.

Asked on Tuesday which of Els’ well-documented losses left the deepest scar, his manager – International Sports Management’s Chubby Chandler – took a stab in the dark, “Couple ones to Tiger were tough.”

If Els was atop the mountain in 1997 following his Open repeat it’s not entirely unfair to say he spent much of the remainder of his career gazing up at the summit from the last base camp.

In sport the most lasting wounds are self-inflicted, unforced errors at inopportune times that lead to dark places and even darker questions. Els’ perennial status as an also-ran was as close to an excused absence as one can get.

Truth is, if Els is guilty of anything it is having been born into an era that would be defined by one man.

“He’s won 61 times and you only remember the ones he’s lost,” Chandler said. “Imagine if he had won a couple of those, he would have won 90 events.”

Yet for Els, the “what if” game is akin to occupational kryptonite. Most players are paralyzed by fear or the prospect of greatness, but the “Big Easy”’s blind spots rest in shadowy memories.

The 54-hole leader in three of the last four majors has failed to close the deal and Els was asked on Tuesday about the unique demands of a Grand Slam Sunday. “I’m probably the best guy to ask,” he offered in a moment of clarity.

The old coaches cliché remains: did Els lose all those close calls or were they simply won by someone else? Not that it matters to Els.

Even last year’s near miss at Pebble Beach, a tie for third that was Els’ eighth top-10 at the U.S. Open, was less a question of execution than it was simply another inexplicably unhappy ending.

“I played such wonderful golf from tee to green,” said Els, who finished two strokes behind Graeme McDowell after a closing-nine 40. “I really found my swing that week, and I wasn't even that bad on the greens. It's just that back nine, it seems like I just kept missing inside 8 feet almost on every hole, and I was really, really disappointed after that.”

But then you don’t get fitted for that many silver medals without developing some level of tolerance to heartbreak’s toxic impact. In this, last month’s Hall of Fame induction ceremony was likely a cathartic exercise for Els, putting in context a career defined in many ways by defeat but rooted in largely stellar play.

From the stage at the World Golf Village even his own resume must have sounded strangely unfamiliar: three majors, 18 Tour titles, 44 international victories, six Presidents Cup appearances and one of just 15 players to have been ranked No. 1 in world.

It may not have added up to whatever lofty goals were racing around his young mind looking down on the pack on June 15, 1997, but for Els, who has been known to show up at golf courses in shorts and flip flops, a verse from the Jimmy Buffett classic, “He went to Paris” must have seemed apropos: “Some of it’s magic, some of it’s tragic, but I had a good life all the way.”