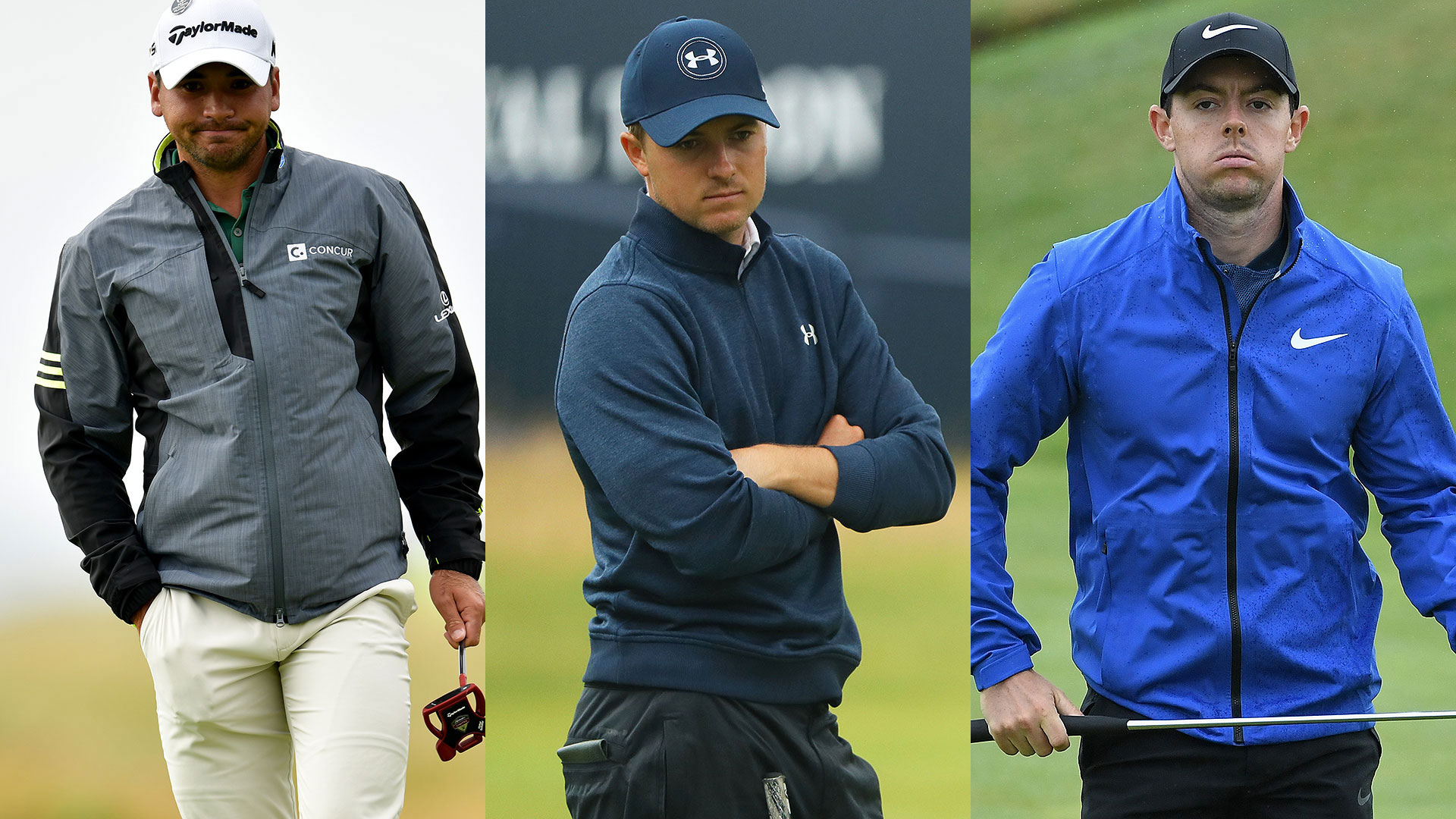 TROON, Scotland – For two days along the Firth of Clyde the Big 3 have largely gone bust.

In Jason Day, Jordan Spieth and Rory McIlroy’s defense, Friday’s gale got the best of almost everyone not named Phil Mickelson and history will show the game’s leading men endured every bit of the raw end of this week’s draw.

Although all three will be hanging around for the weekend at the 145th Open, they really weren’t holding out much hope they’d be able to get within a 9-iron of the claret jug on Sunday.

“At this point if I make the cut, I'm looking to put nice, smooth, solid swings, very confident putts on it to lead into the PGA Championship, because I know my chances here are likely finished,” said Spieth, who followed his opening 71 with a 75 and made the cut on the number to begin the weekend a pair of touchdowns behind Mickelson.

Day and McIlroy will also be around for the weekend festivities, but it doesn’t seem likely that either will be playing anything more than a supporting role.

The world No. 1 is tied for 41st after an eventful 70 on Friday that left him 11 strokes behind the 46-year-old pacesetter, while McIlroy showed an impressive amount of poise on his way to an even-par card that left him tied for 15th place and eight shots back.

“I had a chance to watch Phil yesterday afternoon and this morning, and it's the best I've seen him play in a long, long time. His swings are good. He's got his ball flight under control. He seems like he's putting well,” McIlroy said.

It was a sentiment echoed to varying degrees by each of the Big 3 - tough day, tough side of the draw, tough crowd. But then the weight of unrealistic expectations can be overwhelming at times.

The phenomenon has evolved even further in recent weeks with the emergence of Dustin Johnson as a card-carrying member following his victory at the U.S. Open, some even suggesting the notion of a Big 4 which led one U.K. newspaper to dub McIlroy the Ringo of the group.

“Probably not the first time I've been compared to the Beatles,” McIlroy said earlier this week.

The legend is that it was the late Mark McCormack of IMG who coined the original phrase as a marketing tool shortly after Nicklaus turned pro, but then that’s always felt like an oversimplification at best and a wildly cynical case of revisionist history at worst.

From 1962 to ’71, just 14 of 40 majors (a 35 percent clip) were played without at least one of the Big 3 either winning or finishing runner-up, and often with a combination of that trifecta dueling for the title like at the ’62 Masters, where Palmer beat Player, or the ’65 Masters when Nicklaus beat both Palmer and Player.

The group would combine to win 13 Masters titles, including seven straight in the early 1960s.

By comparison, the modern version of the Big 3 has finished outside of the top two in a major on 10 of the last 21 occasions (45 percent) since McIlroy first got on the major board with his victory at the 2011 U.S. Open.

Just twice, at the ’11 U.S. Open when Day finished runner-up to McIlroy and at last year’s PGA when Day and Spieth finished first and second, respectively, have they legitimately dueled on a major Sunday.

As Friday’s leaderboard proves, the current Big 3 simply don’t have the required head-to-head appeal the original enjoyed. They are friends, or at least friendly, and enjoy the thrill of testing themselves against the absolute best every bit as much as Nicklaus, Palmer and Player, but even McCormack – a true marketing wizard – would be pressed to paint the current landscape as anything other than what it is.

There’s something also to be said for how much deeper fields are today than they were during the original Big 3's reign, if you’re inclined to open that generational can of worms.

If Nicklaus, Palmer and Player arrived at each Grand Slam looking to beat two dozen or so legitimate contenders, the 2.0 group must cast an eye much deeper down the tee sheet.

The average age of the Big 3 is 25.6, which in golf years is traditionally considered just short of their prime years, and they’ve already proven themselves adept at lapping the game’s deepest fields and playing unprecedented golf.

Perhaps they will evolve into the modern version the masses and media want to make them out to be, but until then let’s just enjoy them for what they are – three engaging and utterly entertaining champions.

Nothing more, nothing less.