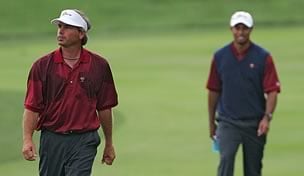 You know the “Most Interesting Man in the World’s” spiel by now:

Police often question him, just because they find him interesting.

Sharks have a week dedicated to him.

He lives vicariously through himself.

And, at least for golf’s version of this magnetic alpha male, he sometimes speaks before he thinks. Or, so it seems as Fred Couples has stumbled his way through his second turn as America’s Presidents Cup captain.

This will not sit well with the masses because Boom Boom has made a career out of being above it all and is almost universally beloved whether he’s plying his trade between Tour ropes or holding court in a Charlotte, N.C., cigar bar. But when it comes to Woods being a potential Presidents Cup pick Captain America has fanned his approach – not once, but twice now.

First, Couples played his way into a corner when he said in June at Muirfield Village, “If (Woods) is not ready to play, he'll be the one to tell me, ‘Don’t waste your pick on me.’ . . . He doesn't have to prove a lot to any captain.”

That was, of course, before Woods returned from three months on the shelf, managed just six Tour rounds, only one of which was under par, and headed back to his south Florida lab in search of answers and “reps,” which apparently doesn’t mean what we thought it meant.

“It's hard for me right now to aim closer to flags or closer to where I want the ball to end up. I thought I was beyond that,” Woods said after an opening 77 on Thursday at Atlanta Athletic Club.

Last week at the Senior Players Championship Couples attempted some damage control, saying he had spoken to Woods’ manager and that they were trying to convince Woods to add to his post-PGA Championship schedule.

“He can't just show up the week before in Australia. I have made it clear that whoever I picked will be playing the (Australian Open, which Woods is committed to) the week before. But I need him to play more than just there. There's quite a few tournaments after the Tour Championship,” Couples said of the four Fall Series events that follow the FedEx Cup finale.

On Monday Woods said in a blog posted on his website that he “might add” to his Tour schedule this year, but made no guarantees. However, Woods, like many, must be wondering why he should add to his fall lineup?

When Woods missed the cut at the PGA and announced he was not adding last week’s Wyndham Championship to his agenda Couples’ decision had effectively been made for him. He will make his two captain’s picks on Sept. 26, the Monday after the Tour Championship and the mathematical truth of the situation is Woods is not qualified to play any Tour events before then.

Even if there were some sort of quid pro quo agreement between Couples and Woods that the latter add an odd fall event or two, Capt. Freddie is still confined to making his pick based on Woods’ record to date: eight events, two top 10s and a missed cut.

There is also the question of what a fall start would do for Woods, not to mention Couples.

Your correspondent contends that Woods does, eventually, scale the competitive abyss he now finds himself and rediscovers his forgotten form. But given his play at the WGC-Bridgestone Invitational (T-37) and PGA (missed cut) there are no guarantees that epiphany will come at the Justin Timberlake Shriners Hospitals for Children Open (where he won his first Tour title in 1996), the Children’s Miracle Network Hospitals Classic (which he has won twice) or the McGladrey Classic (which may be the best confidence-building fit for his game right now).

And what if Woods misses the cut at Sea Island (Ga.) Resort or Disney? What does that do for his confidence, to say nothing of Couples’ decision to skip over three basketball teams full of players to make him a pick?

Proponents of a Woods pick claim he is still the only American with enough competitive cachet to chill his opponents on the first tee. Maybe. Or maybe all the Internationals see at Royal Melbourne in November is a guy who couldn’t break par at Atlanta Athletic Club. A guy who is learning a new swing on the fly. A guy who is two calendars removed from his last Tour title.

Woods is 28th on the U.S. points list and likely to slide before Couples makes his picks. Well behind the likes of Keegan Bradley and Mark Wilson, two players who have a combined four Tour titles and a major more than Woods this year. Behind Zach Johnson, who is a combined 9-9-1 in Presidents and Ryder Cup play, and Rickie Fowler, one of the rare bright spots for the U.S. Ryder Cup team last year in Wales.

On this, Couples’ friend and next year’s U.S. Ryder Cup captain Davis Love III is surely taking notes. When asked about Woods and captain’s picks it is best to err on the side of ambiguity. Something along the lines of, “I’d love for Tiger to be on the team, but we’ll have to wait and see what happens,” would seem to leave enough wiggle room.

Like the uber-cool “Most Interesting Man,” Couples’ words carry weight that would break a less-interesting man’s jaw; and, considering his bungling of the Woods situation, his logic is enough to twist even the most optimistic observer into a chocolate-covered pretzel.