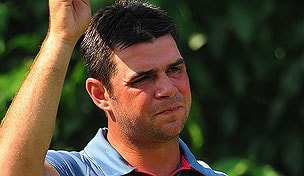 Amid the morning mist on Monday in Malaysia, Gary Woodland stepped to the 18th tee at Kuala Lumpur Golf & Country Club and gave the golf world the ultimate head fake, smoothing an iron into play on the massive 634-yard, par-5 closing hole.

He broke the code, right? The former college point guard knows the rules, coaches coach, shooters shoot and bombers bomb. In this moment, a sudden-death playoff against Ryan Moore that spilled over into Monday at the CIMB Classic by mounting weather delays, one of the game’s most athletic players had a chance to overpower the sprawling final hole and claim his third PGA Tour title.

Instead, he went with an iron off the tee, hit a less-than-stellar layup into the rough and watched as Moore birdied the hole to claim the crown. In the loss, however, we saw a glimpse of Gary Woodland 2.0, a retooled player whose health and head have finally caught up with all that athleticism.

“I didn't think I could cover the bunkers this morning, especially where that pin was,” Woodland reasoned on Monday. “If the pin was up front, we probably would have been a little more aggressive, but with the pin in the back I didn't want to leave it short of the bunker and have a tough third shot. We decided to lay up and tried to hit a good wedge in there.”

In short, the mighty has become mindful. And in the case of Woodland he’s come by it honestly.

For all of the Monday morning quarterbacks – or maybe it was Sunday night couch potatoes considering the CIMB’s playoff was aired in primetime on the East Coast from Malaysia – who took to second guessing Woodland’s choice of clubs in extra frames know only that the decision is a sign of progress.

Consider that less than six months ago, Woodland had drifted to 259th in the World Golf Ranking and was mired in an ultimate makeover that others would likely consider a career-ending abyss.

In order, Woodland changed management firms, swing coaches (twice), equipment and eventually caddies (Tony Navarro). If not for the omnipresent Kansas Jayhawk on his bag, casual fans may have been challenged to pick Woodland out of a crowded tee sheet.

“Gary changed 14 clubs and the golf ball this year,” said Claude Harmon III, who took over for his famous father, Butch, as Woodland’s swing coach after this year’s Masters. “That’s tough, look at the guys who have changed like that. Look at Rory (McIlroy), it’s not easy to do. There was a lot of change.”

But the biggest change this year may have been Woodland’s health. Dogged by ailments large and small since joining the Tour in 2009, Woodland was nearly sidelined this spring with a left-wrist injury.

The result was a dramatic grip change to help alleviate some of the pressure on his ailing wrist and a return to a more familiar left-to-right shot shape. Or, as Harmon figures, “almost a pull fade.”

Results came slowly at first and in August he needed to talk himself into playing the Reno-Tahoe Open while the world’s top players plied their trade at the WGC-Bridgestone Invitational.

The combined inspiration of playing an opposite-field event and Reno’s modified Stableford scoring format proved to be the perfect tonic to wrest Woodland out of his slump. He won the event by nine points.

Two weeks later Woodland solidified his second trip to the Tour Championship with his runner-up finish at The Barclays.

“I'm healthy. That's a big key,” Woodland said. “I put a lot of hard work in. It's been a process with the changes I've made, switching to Butch and his son, and it's finally starting to come together, which is nice. I put a lot of work in on the short game, a lot of work on the middle game, and we're starting to put it together now.”

The CIMB was Woodland’s last official start of 2013 and there is a measure of maturity in how the 29-year-old plans to spend his offseason. In addition to his normal gym/practice tee regimens, Woodland has started working with Pat Goss on his short game and sports psychologist Julie Elion. One of the game’s most powerful has turned to precision and the power of the mind in his quest to regain his world-beater status.

During a recent team meeting with Woodland, Harmon said his goals for 2014 were telling – improving his wedge game and earning a spot on next year’s U.S. Ryder Cup team.

“This is the player you are hopefully going to see for the next three, five, seven years,” Harmon said.

Not many players have successfully reinvented themselves, but in Woodland’s case he’s done so from the wrist up.