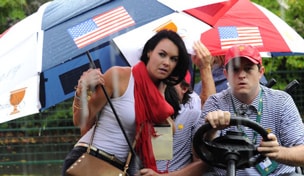 Getty Images
BETHESDA, MD - JUNE 19: Rory McIlroy of Northern Ireland poses with the trophy after his eight-stroke victory on the 18th green during the 111th U.S. Open at Congressional Country Club on June 19, 2011 in Bethesda, Maryland. (Photo by Andrew Redington/Getty Images)  -

DUBLIN, Ohio – It seems Mother Nature has had her fill of lopsided Presidents Cups.

Or maybe the old girl just has a soft spot for the Rest of the World. Either way, another weather delay and a foreboding forecast appears to be conspiring in the Internationals' favor at muddy Muirfield Village.

For the second consecutive day play was delayed, this time for two and a half hours, by a storm and eventually called because of darkness with four matches still to be determined.

On Thursday the green and yellow radar blob that inched its way through central Ohio actually resembled the International standard and proved to be a much-needed timeout. Friday’s intermission had a similar impact on the proceedings.

With the Internationals down in five of six Day 1 matches, captain Nick Price’s crew rallied to finish the day down just 3 ½ to 2 ½, which felt to many in green and yellow like a victory, be it moral or otherwise.

When the horn echoed through Muirfield Village at 3:09 p.m. ET on Friday the U.S. was ahead in three and tied in one other match. By the time darkness descended on the property each team had won a match and the United States was leading in two and trailing two.

First-time captain Price figured it would be a format change – officials began this week’s matches with a fourball session, instead of the traditional foursome session that the Internationals have struggled in – and an infusion of fresh talent (there are seven rookies on the International side) that would be the tonic to wrest his team off a 1-7-1 drought in the biennial matches.

He didn’t count on the weatherman playing the role of the 13th man, but will take everything he can get.

The second session is scheduled to restart at 7:35 a.m. on Saturday, followed by the third fourball and fourth foursome session in the afternoon, leaving the 12 singles bouts for Sunday, weather permitting.

That schedule would allow officials to finish at roughly 10 minutes before 7 p.m. (sunset is 7:08 p.m.). “That’s in an ideal world, obviously,” said Tour official Steve Carman. And this week has been anything but ideal.

Otherwise, officials would have to consider finishing on Monday or reducing the number of matches. Regulations don’t allow for a reduction in matches like at the 2010 Ryder Cup in Wales when weather delays forced a reduction in the remaining number of foursome matches from eight to six, but if play is not completed by sundown on Monday the team with the most points would be declared a winner.

The latter option could be Price & Co.’s best option.

The Internationals haven’t won a foursome session since Day 1 in 2003, a reality which prompted Price, former International captain Greg Norman and future captain Ernie Els to ask PGA  Tour commissioner Tim Finchem to reduce the number of team matches from 24 to 16.

Finchem balked at the Internationals' request, but Mother Nature may well have the final say.

“If we have more weather it might happen,” Els said of the possibility of an abbreviated schedule.

It’s not as though umbrellas and standing water spell doom for the Americans, not with Phil Mickelson and Keegan Bradley picking up where they left off last year at Medinah and Tiger Woods and Matt Kuchar picking up a new tradition.

Mickelson, who is feeling so confident he put a driver back in play in competition for the first time in months on Day 2, and Bradley birdied seven of eight holes starting at No. 5, a phenomenal run considering the format, and steamrolled arguably the Internationals' best two-ball of Jason Day and Graham DeLaet, 4 and 3.

Woods and Kuchar were 6 under on the front nine and led Louis Oosthuizen and Charl Schwartzel, 3 up, through 12 holes in their quest to remain undefeated.

But for Price there is opportunity in his team as well as the gray October skies.

Els and rookie standout Brendon de Jonge rolled over Bill Haas and Hunter Mahan; and Adam Scott and his new best friend Hideki Matsuyama were 4 up over Jason Dufner and Zach Johnson through 11 holes.

Depending on the volatile Ohio skies, officials are hoping to get back on schedule on Saturday. If not, the weather could, in theory, help swing the cup in the Internationals' favor for the first time since 1998. Amid the gloom late Friday the possibilities were enough to brighten Price’s mood.

“We are up in (two)  matches, and I think if you consider what's happened in the past in alternate shot, we are certainly very happy to be in that situation,” he said. “I'm not ruling out the chances that we may get another halve or a full point somewhere. So if we can tie this thing up at the end of tomorrow morning's play, that would be absolutely perfect for us.”

And if it continues to storm, well, that would be just fine as well.