From CordeValle to Kenya, Koepka learning from playing opportunities 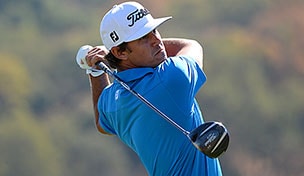 Getty Images
Fred Couples of the US during the first round of the 77th Masters golf tournament at Augusta National Golf Club on April 11, 2013 in Augusta, Georgia. AFP PHOTO / DON EMMERT (Photo credit should read DON EMMERT/AFP/Getty Images)  -

Some Sunday nights are more eventful than others.

“This is tough,” Peter Uihlein allowed, almost breathless as he rockets the remote control between the closing moments of the New England Patriots-New Orleans Saints game and the final round of the Frys.com Open.

Uihlein is New England to his core. As for the Frys.com Open, that was personal with his roommate Brooks Koepka locked in an unlikely struggle to win his first PGA Tour title.

The Pats pulled it off thanks to a last-minute toss from Tom Brady. Koepka did not, done in by four bogeys over his final 10 holes and relentless Jimmy Walker. Uihlein’s optimism, however, remained undeterred for both franchises.

“He is the most confident kid I’ve ever met,” he said of Koepka.

But then you’d have to be confident to blaze a trail through the weeds of European professional golf all the way to the PGA Tour doorstep. What else would drive Koepka to forego the normal means to an end for Tour membership for the four corners of the globe if not confidence?

Since Koepka bolted Florida State University late last year he has been, along with Uihlein, on the path less traveled, at least by American standards.

Since putting a peg in the ground in his first play-for-pay event last October in Italy, Koepka has plied his trade in 14 countries, from the Czech Republic to Kenya with cameos at the Open Championship and PGA Championship.

“He had to get more pages in his passport,” laughs Claude Harmon III, who took over as Koepka’s swing coach in early March.

It’s why, in his own globetrotting way, Sunday’s letdown at CordeValle – he led by as many as four strokes before the turn – will be another check mark in his development more than a disappointment.

“Obviously I just didn't get it done,” said Koepka, who tied for third following a closing-round 72 at the Frys.com Open. “You know, it happens. Just learn from it and move on.”

If Koepka’s take is a tad too optimistic he’s come by it honestly.

From the outset the 23-year-old has just wanted a chance not charity. It’s what convinced Florida State golf coach Trey Jones to take a flyer on the unheralded Koepka.

“He didn’t have much of a junior record and I told him I would be limited as to what I could do for him with a scholarship,” Jones recalled. “He told me, ‘Don’t give me anything, I just want a place to play.’”

That performance-driven approach propelled Koepka to be a three-time All-American at FSU and, after four stellar years in Tallahassee, Fla., it was a similar conversation that convinced him to bypass the normal road to the PGA Tour for the wilds of the European Challenge Tour.

Simply put, he just wanted a place to play.

Koepka’s management team, Hambric Sports, secured him a few sponsor exemptions on the secondary European circuit and he quickly earned status on that tour, and before July he’d already won three times to earn a battlefield promotion to the European Tour.

Koepka and Uihlein, who has moved to 68th in the World Ranking playing the European Tour almost exclusively, don’t look the part of trailblazers but with the Tour’s overhauled qualifying process now more closed off to young talent as ever they have become, however reluctant, the Lewis and Clark of modern professional golf.

The number of Americans playing European Tour Q-School doubled this year to 57 and following the inaugural Web.com Finals this month that number is likely to increase in coming years.

“What he and Peter are doing is pretty much what I saw Adam (Scott) and Trevor (Immelman) and Paul Casey do back in the day,” Harmon said. “No disrespect to the Web.com Tour, but if you look at the players who started their careers on the European Tour, Justin (Rose), Trevor, Adam, they all went on to win major championships. If you look at Brooks and Peter, they appreciate things more. They appreciate getting a rental car because it wasn’t so easy.”

It’s probably why Koepka made things look so easy for 3 ½ turns at the Frys.com Open. Compared to the trains, planes and automobile way of things on the Challenge Tour, life is easy in the Big Leagues.

Although he didn’t win, Koepka earned $240,000 for his tie for third at CordeValle, which gets him about halfway to special temporary Tour status, and a start at this week’s Las Vegas stop, not to mention a spot inside the top 100 in the World Ranking (81st). Combined with a likely start at next month’s OHL Classic in Mexico, Koepka seems poised to trade his passport in for a full-time Tour pass before January.

That reality was the subtext of Uihlein’s passive anxiety late Sunday. Although best friends, the south Florida combo is as competitive as they come, both on the golf course and beyond.

Before Koepka headed to California for last week’s start he arrived on the practice tee at The Floridian with a simple message for Harmon, “I’m tired of getting my butt kicked by Peter.”

The two have a regular Tuesday game which started after they were included in Phil Mickelson’s Tuesday match at this year’s PGA Championship.

“It was me and BK against Phil and Rickie (Fowler),” Uihlein said. “We lost on the 18th. But ever since then we’ve started playing each other with a little more on the line.”

That alpha male mentality spilled over into the duo’s south Florida digs during a recent Ping-Pong match that resulted in a broken Ping-Pong table. “I dove for a long shot right into the table,” Uihlein said. “I was winning and wasn’t going to give up the point.”

A new table arrived on Monday, but with both players jet-setting their way to stardom around the globe the rematch will have to wait. At this rate, the duo’s next clash may end up being on a Tour Sunday with much more than just pride on the line.