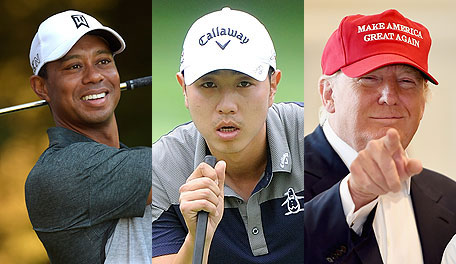 GAINESVILLE, Va. – The good news for Tiger Woods: He opened with rounds of 68-66 to put himself into contention at the Quicken Loans National. The bad news: If he were to win at Robert Trent Jones Golf Club it wouldn’t be enough to move him into the top 100 in the Official World Golf Ranking because of a relatively weak field.

The host with the most headlines this week’s Cut Line.

The power of patience. For months Woods has told anyone who would ask that the “process” was coming along. That the new “baseline shift” was still a work in progress.

For the majority of two days at the Quicken Loans National it appears Tiger finally may have reached that tipping point between progress and good play.

For the second time in his last three starts Woods pieced together back-to-back sub-70 rounds to move into contention at his own event and open the possibility that 2015 may not be another lost season.

“It takes a little time sometimes and you have to be patient with it and I know what I’m doing out there,” said Woods, whose second-round 66 moved him to within three strokes of the lead. “People want the immediate fix, the one tip that’s going to work for the rest of their life. It doesn’t work that way.”

Woods bristled at the notion that his two-round total of 8 under is an indication that he’s back. Maybe not, but he’s certainly better.

All for one. In the hyper-competitive world of professional golf it’s often easy to overlook the fact that being fair is just as important as being first.

Consider the plight of Sangmoon Bae, the 29-year-old two-time PGA Tour winner who was ordered back home to South Korea when a court denied his request to defer his mandatory military service last week.

In response to Bae’s plight, the Tour policy board on Monday approved an adjustment to its regulations that will now treat mandatory military service similar to the way medical exemptions are handled when it comes to future status.

The new Tour provision will give commissioner Tim Finchem the discretion to grant an eligibility extension for a “mandatory obligation,” like military service or religious obligation, which will assure that Bae will have status when he returns from his 21 months in the South Korean military.

“It makes sense given anyone’s situation,” said Jason Bohn, one of four player directors on the policy board who approved the adjustment to the Tour’s policy. “He has no control over the situation he has been put in and I think looking out for PGA Tour members is a good thing.”

Tweet of the week: @skovy14 (Rickie Fowler’s caddie Joe Skovron): “Just gave him the yardage and got out of the way.”

Skovron was referring to Fowler’s hole-in-one on the par-3 ninth hole on Thursday at Robert Trent Jones Golf Club. For the record it was a “choked down 7-iron” for Fowler’s second ace on Tour. As an added benefit, The Players champion sent a few cases of beer to the media center to celebrate. Have to give him credit, he knows his audience.

An unscheduled stop. On Thursday the Tour released its 2015-16 schedule, a 47-event mass of moving parts due to golf’s return to the Olympics next year.

While everyone knew next year’s schedule was going to be different, even difficult for some, seeing it on paper was certainly an eye-opening experience.

For many tournaments the moves were less than ideal but the Tour made sure to lay the groundwork for the impending changes early and explain the importance of golf’s return to the Olympics.

“When we started talking about this to the Tour everybody bought in that the Olympics were going to grow the game and everybody was on the same page,” said Travelers Championship tournament director Nathan Grube.

Everyone, it seems, is rowing in the same metaphorical direction for the 2016 Games, but quietly some are hoping the waters aren’t quite as choppy when golf again finds itself in the Olympics in 2020.

Tough choices. It’s a crowded schedule for Tour players and you can’t compete in every event, but given Woods’ significance to the game it is surprising to see the relatively weak field assembled this week for Tiger’s Quicken Loans National.

Sunday’s winner at Robert Trent Jones Golf Club will receive 34 world ranking points, well below the norm for the event and squarely in the bottom half of Tour events.

Of the 36 stand-alone Tour events that have been played this season only one, the John Deere Classic (30), awarded fewer points to the champion.

The calendar has not been kind to the Quicken Loans and this year’s move to Robert Trent Jones likely didn’t help attract a better field, but the host deserves better.

Being The Don. Whether you agree with his politics doesn’t matter, Donald Trump’s circus-like appearance on Thursday at the Women’s British Open was ill-advised.

Presidential politics can be an unsavory business and Trump has certainly added to that reality during his bid for the White House, which makes his cameo at Turnberry, which he owns and is the site of this week’s Open, perplexing.

Trump spent a small fortune to purchase the iconic seaside layout and he certainly has a vested interest in the success of this week’s championship.

But given his polarizing nature and how his recent remarks regarding immigration have caused such a stir in golf it was an easily avoidable distraction.