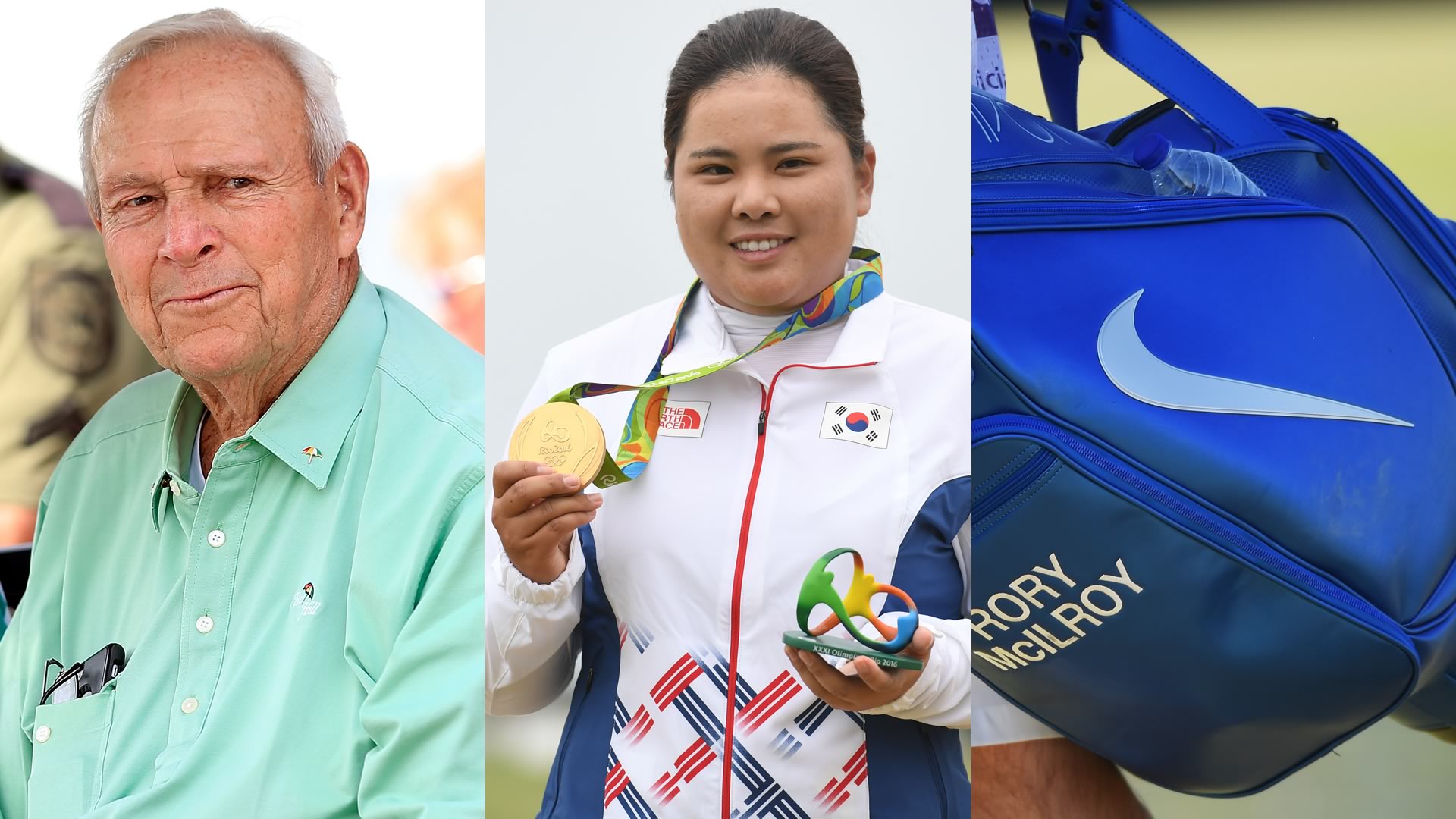 It’s only apropos that 2016 was the year of the monkey. In our bookend Cut Line we applaud the U.S. Ryder Cup team for getting the monkey off their backs at Hazeltine National, and arraign the USGA for what could best be described as rules monkey business.

Long live The King. Rory McIlroy had just put the finishing touches on an $11.5 million payday at the Tour Championship in September when news of Arnold Palmer’s death surfaced.

Initially stunned by the news, McIlroy was told by a PGA Tour media official he could wait to comment, but the Northern Irishman shook his head emphatically.

There was no need to wait.

“No, no. Look, Arnie put the game on the map. I don’t think any other sports person in any other sport did for their profession what Arnie did for our game,” the emotional FedEx Cup champion insisted. “I wouldn’t be here playing for this ridiculous amount of money without him and I was just fortunate to spend some time with him.”

It was just one of thousands of tributes paid to the 87-year-old legend in the days and weeks after his death, but for McIlroy it was important to tell the world what Palmer meant to him and the game.

Arnie would have approved.

Up to the task. Whatever you want to call the task force-turned-committee there’s only one word for the results the group produced: success.

The task force that was formed in the wake of the U.S. loss at the 2014 Ryder Cup was reactionary, many said, and left no wiggle room if things didn’t go the American side’s way in ’16. In quiet circles, Europeans chuckled at the idea that the secret sauce to winning the matches could be found in a conference room.

But along the way the American players took ownership of their team room. They tabbed Davis Love III to lead the U.S. side again, overhauled the selection system and, most importantly, created a process every player could believe in.

Love & Co. dismissed the idea that the American victory at Hazeltine National was somehow vindication for everything the task force set out to do, reminding all that the changes were about the next 16 matches not just the ’16 matches.

That’s how ethos are altered and legacies are built, whatever you call the agent of change.

Tweet of the Year: @WestwoodLee (Lee Westwood) “No pressure there then lads!”

The Englishman was referring to a tweet sent out, by Golf Channel, with a quote from Love prior to the matches: “This is the best golf team, maybe, ever assembled.”

The quote, taken in full context, was a hypothetical explanation of what Love would tell his team before the matches, but it ended up on the European team’s bulletin board.

Love’s team may not have been the best “ever,” but they were certainly unrivaled in 2016.

Brazil or bust. The golf course would never be completed in time. Rio wasn’t safe for athletes or fans. The Zika virus would be the lasting legacy of the Olympics.

The headlines in the weeks before this year’s Games told a dire story, and high-profile no-shows from the likes of world No. 1 Jason Day, Rory McIlroy and Jordan Spieth didn’t help to make golf’s return to the Olympics an unqualified triumph.

Despite the setbacks, the logistical and security concerns, despite the mosquitos – for the record, we saw exactly one during our fortnight in Rio – golf’s return was largely a success.

Six medals were doled out to players from six different countries, the competitions were compelling and the athletes unharmed.

What remains to be seen is how all that work will benefit the game in the long term. Interest in golf in undeveloped countries has increased, but according to various reports the Olympic Golf Course has not exactly lived up to its lofty billing.

Getting golf to Rio was difficult. Making sure that return means something may be even more challenging.

Pelley’s play. European Tour chief executive Keith Pelley is young and engaging, some might even say avant-garde; and along with incoming PGA Tour commissioner Jay Monahan he represents a fundamental shift to a more forward-thinking power base in the game.

It turns out Pelley is also a bit of a gambler.

Last month Pelley and the European Tour unveiled a new Rolex Series, a seven-tournament series with larger purses that officials hope will stem the talent drain of young players to the U.S. tour.

Although the initiative was largely applauded, Pelley conceded that a $7.7 million shortfall for three of those events will be subsidized by the tour and Rolex in 2017. Nor does the current version of the Series do anything to shore up the weak part of the Continent’s schedule (February-May).

Pelley has impressed since taking office last year, but his challenge now is delivering on all that promise.

Open season. Two national championships, two rules snafus. It’s not exactly the kind of scorecard the USGA had hoped for in 2016, but at the association’s two biggest events, the U.S. Open and U.S. Women’s Open, the final outcome was marred by curious rulings.

At Oakmont in June, Dustin Johnson was penalized a stroke when officials decided he caused his golf ball to move on the fifth green during Sunday’s final round, even though Johnson said he’d done nothing wrong.

A month later, it was Anna Nordqvist who was penalized when officials said she grazed the sand while playing out of a fairway bunker during a playoff.

Both incidents were glaring, high-profile examples of how archaic the Rules of Golf have become to a modern audience, and USGA executive director Mike Davis assured a group of club professionals last month in New York that change was coming.

A bit of that fresh look arrived this week when the USGA and R&A announced a new local rule that eliminates the penalty when a ball is accidentally moved on the putting green.

It was a good start, but the “modernization” of the rules needs to continue.

Swoosh-ed. In August, Nike Golf announced it was getting out of the hard goods business and would focus on footwear and appeal.

As to why the Swoosh was unable to make its club business work despite having the game’s, and perhaps all of sport’s, most influential pitchman for well over a decade is best left to those with a better grasp of the category.

But it’s the immediate aftermath of Nike Golf’s move out of the hard goods business that is so difficult, not for the players like Tiger Woods who must now find new equipment, but for the dozens of engineers and technicians who lost their jobs.