Cut Line: The book on Tiger 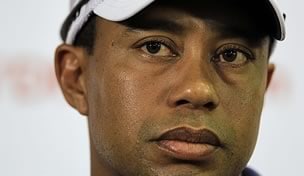 Hope springs eternal at the Humana Challenge, but at what cost? While Charl Schwartzel makes a historic, and cost effective, pitch for this year’s Champions Dinner at Augusta National, the collateral cost of Hank Haney’s new book seems to be the trust of his former boss. Who says the golf season doesn’t really start until Torrey Pines?

Desert do-over. Wasn’t long ago that Anthony Kim was getting worked over for his decision to skip the Bob Hope Classic, his hometown event that he bypassed in 2010 to play in Abu Dhabi.

So in the name of equal time it’s worth pointing out that Kim, who attended high school in the Coachella Valley and was given a sponsor exemption into the event in 2007, is among a drastically improved field this week.

“I'm happy to be here now; I will try to play as good as I can for the people that come out to watch, and the people that have supported me throughout the years, even in high school,” said Kim, who has been staying with his parents in the Palm Springs area preparing for his 2012 debut and training at The Madison Club.

With Kim it seems criticism comes easy, but credit is hard to come by.

Celebrity chef. Of all the endearing images that we associate with the Masters, a reigning champion working a grill under the venerable oak tree late Tuesday afternoon has never been a consideration, but if Charl Schwartzel has his way that may change.

Schwartzel has asked to do the cooking for this year’s Champions Dinner and has created a menu that will include a South African braai with barbecued filets, lamb chops, sausages and slabs of cooked cheese.

Just to be safe, Cut Line would like to preorder the bone-in filet, cooked medium with a side of pimento cheese.

BroStache. According to Johnson Wagner’s manager, the Sony Open champion didn’t shave in November and allowed the 1970-era mustache to remain out of laziness and superstition more so than a stylish statement.

“Kind of made a deal with myself in December that if I was to get into the Masters, then I was going to keep the mustache for at least this year,” Wagner said on Sunday in Hawaii.

Count Wagner’s win, and his return trip to Augusta National, as a good-things-happening-to-good-people deal, but he may have overstepped the boundaries of decency with the facial hair.

Irreconcilable differences. Breakups are never easy, particularly when a party to the split puts pen to paper and a publisher on retainer, but Cut Line was surprised Tiger Woods reacted so strongly on Thursday when asked about Hank Haney’s forthcoming book, “The Big Miss.”

“I think it's unprofessional and very disappointing,” Woods told ESPN.com, “especially because it's someone I worked with and trusted as a friend. . . . There have been other one-sided books about me, and I think people understand that this book is about money. I'm not going to waste my time reading it.”

For whatever reason Haney, unlike most other members of Team Tiger, wasn’t asked to sign a nondisclosure agreement, and he has made it clear that the “Miss” will not be a tell-all tome.

From Woods’ point of view “Miss” seems to be a breach of trust, but in a 2010 interview with Golf Digest Haney said of his relationship with Woods, “It didn't get dysfunctional; it always was dysfunctional.”

Maybe Woods should feel disappointed, but he shouldn’t be surprised.

Paradise lost. Stop us if you’ve heard this one: Rory Sabbatini gets sideways with a Tour frat brother, exchanges a few four-letter friendlies for all the patrons to hear and spends more time talking about his behavior than his game.

According to various reports, Sabbatini and Vijay Singh had a verbal clash during the third round of the Sony Open after Singh swore at Sabbatini’s caddie, Mick Doran, for moving while he was preparing to putt on the first hole.

By all accounts, Sabbo – who had a similar row with Sean O’Hair last year in New Orleans and has spent more time in the Ponte Vedra Beach, Fla., doghouse than anyone else, by most accounts – was simply standing up for his caddie, but when you continually find yourself in the wrong place at the wrong time maybe it’s time to own it – the problem may be you.

Tweet of the week: @RobLowe “Hearing my fave, No. 18 Peyton Manning will not return to #NFL. Wow.” The actor also added that “my people are saying Manning will retire today (Jan. 18).”

In a related item, Justin Timberlake tweeted that his sources are telling him that Bubba Watson is also retiring and may enter the GOP race for the White House. #NewMediaDangers

Hope and consequences. In 1965, Bob Hope loaned his name and iconic profile to the PGA Tour’s Palm Springs stop, and for five decades the comedian has been as much a part of the event as blue-haired volunteers and cloudless skies.

That all changed this year with the advent of the Humana Challenge in partnership with the Clinton Foundation. Many have credited the former president’s involvement for improving this year’s field, although one less amateur partner and competitive round, not to mention the long-awaited exit from the Silver Rock course, probably had something to do with that as well.

It’s the loss of Hope’s name from the marquee that stings the most. Call it the “Bob Hope Classic presented by Humana for world peace and yip prevention” for all we care, just don’t forsake tradition in the name of economic expediency.