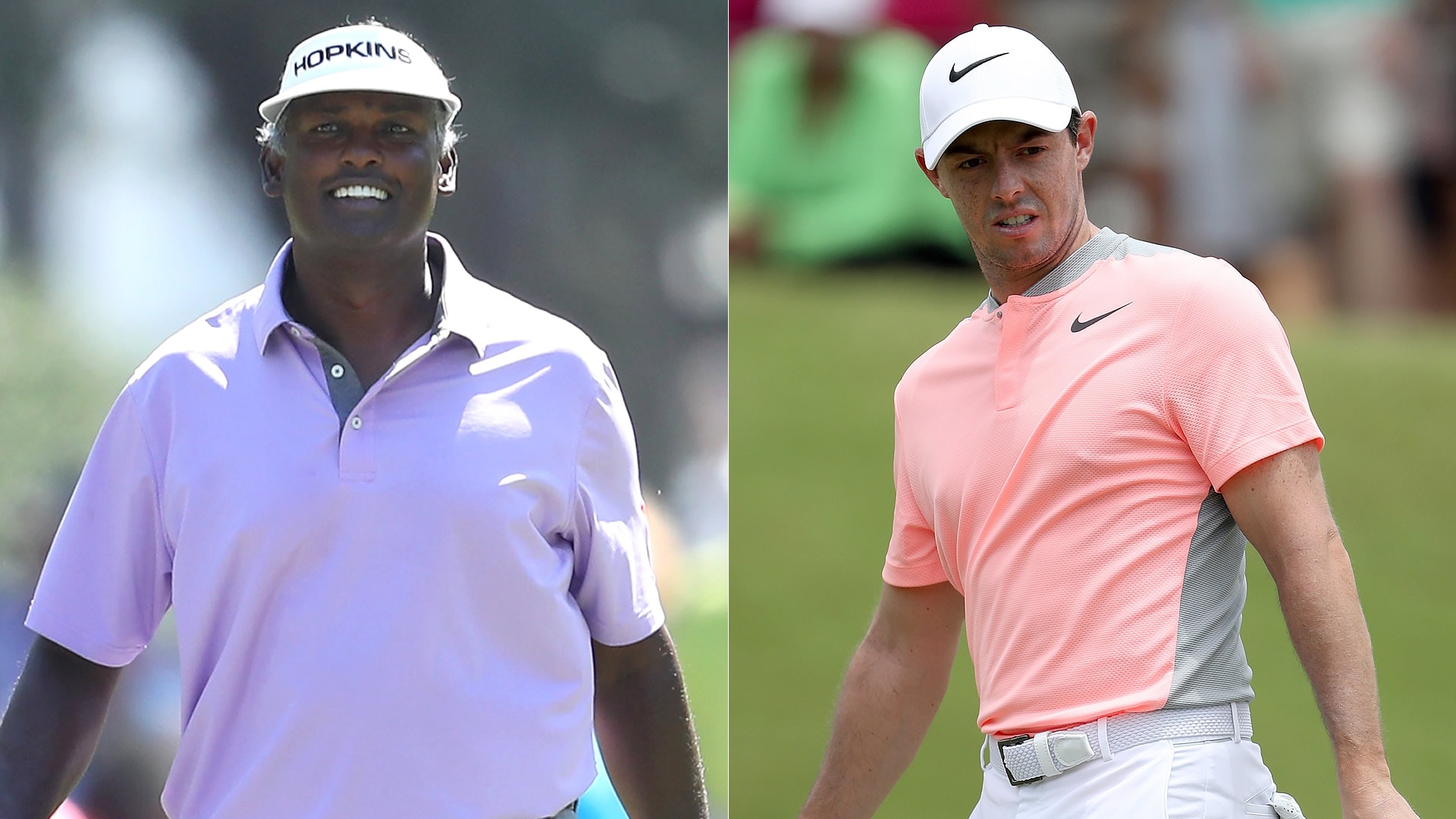 Saturday is Moving Day in golf, but there’s already been plenty of movement this week, including the PGA Tour’s season-long points race entering its second decade with momentum, Vijay Singh finally get his moment in court and distance-measuring devices making their professional debut.

FedEx future. Lost within the frenzied happenings of what turned out to be a busy week at TPC Sawgrass was the PGA Tour’s announcement that FedEx had signed on to sponsor the circuit’s season-long points race through 2027.

When that current contract is completed it will mark 21 years for the playoffs, which means there’s a good chance there will be a Tour player whose only point of reference in professional golf is the season-long competition.

Tour commissioner Jay Monahan said last week there’s already 68 percent of the Tour whose earliest memories of pro golf involve the playoffs, and as the event inches toward that 21-year mark that association is only going to grow.

“What we forget, here we are at The Players after 40-plus years, you go to other events that have been around a long, long time, the cup is only in its 11th year,” Monahan said. “It’s still embryonic, but you get out 20 years and look at the trajectory of big events over time and it starts morphing and growing. That’s where strength is created. We always knew it would take time.”

After last week’s announcement, time is certainly on the Tour’s side.

Although Thompson’s entrance from 10,000 feet for her pro-am on Wednesday at the Kingsmill Championship was impressive, her decision to team with the SEAL Legacy Foundation, a nonprofit organization dedicated to providing support to families of wounded and fallen U.S. Navy SEALs, was truly inspired.

Down Range. In March, the USGA and R&A unveiled a list of proposed changes to the Rules of Golf that included the possible use of distance-measuring devices (DMDs) in competitions.

At this week’s BMW Charity Pro-Am on the Web.com Tour, players are being allowed to use distance-measuring devices during competition rounds. The rule maker’s reasoning for the proposed change was that, “distance is public information a player may get from anyone; and on most courses, this information is found on sprinkler heads, markers, posts, etc.”

Officially, the idea that by allowing the use of DMDs it will also help speed up play, which has become a particularly hot take in recent months, is not mentioned in the USGA’s announcement, but it has been implied.

This week’s event on the Web.com Tour will be an interesting test of that theory, but if player reaction to the concept of DMDs speeding up play is any indication the powers-that-be shouldn’t have high expectations.

Holding court. On the same day Vijay Singh moved into contention at last week’s Players with a second-round 68, a New York Supreme Court judge ruled that his lawsuit against the Tour should go to trial.

Four years after suing the Tour for what Singh claimed was the circuit’s reckless administration of its anti-doping program, judge Eileen Bransten paved the way to a possible legal showdown when she partially denied the Tour’s request for summary judgment regarding Singh’s claims the circuit breached its implied covenant by suspending him for his use of deer-antler spray before consulting with the World Anti-Doping Agency (WADA).

“We are very pleased. We think this is a great victory for Vijay and all the members of the PGA Tour,” Singh’s lawyer Jeff Rosenblum said. “I think it’s a victory for all pro golfers and future pro golfers that the Tour will be held accountable for its actions when it acts unreasonably and unfairly.”

At the heart of this issue is the damage that Singh claims was done to his reputation by the Tour’s decision to suspend him, a sanction that was later withdrawn after the circuit consulted with WADA.

Any time golf ends up in court it’s not great, but as Rosenblum points out, the lawsuit is a chance for the Tour to refine an anti-doping policy that – without the protections provided athletes in other sports by unions and collective bargaining agreements – probably needs some tweaks.

More rehab for Rors. When he bolted TPC Sawgrass last week following a tie for 35th, Rory McIlroy was cautiously optimistic the rib ailment that slowed him at The Players was nothing serious and an MRI on Monday confirmed that there was no new injury.

But news on Friday that McIlroy, who missed seven weeks because of a rib injury earlier this year, would skip next week’s BMW PGA Championship was still unsettling.

“Having had a reaction to my earlier rib injury, I have been advised to take a conservative approach to my recovery . . .,” McIlroy said in a statement. “It’s a disappointing decision to have to make, but I have to ensure I make a full recovery. I will now continue the process of preparing my game for the U.S. Open and the rest of the season.”

Although the cup still seems half full for the world No. 2, back injuries have taken a toll on the game’s best this season, with world No. 1 Dustin Johnson missing the Masters with an ailing back and Tiger Woods announcing in April he’d undergone his fourth back surgery. If the collective isn’t as calm as McIlroy we’ve certainly come by our anxiety honestly.