Cut Line: Dinner with Jack and a swing for Tiger 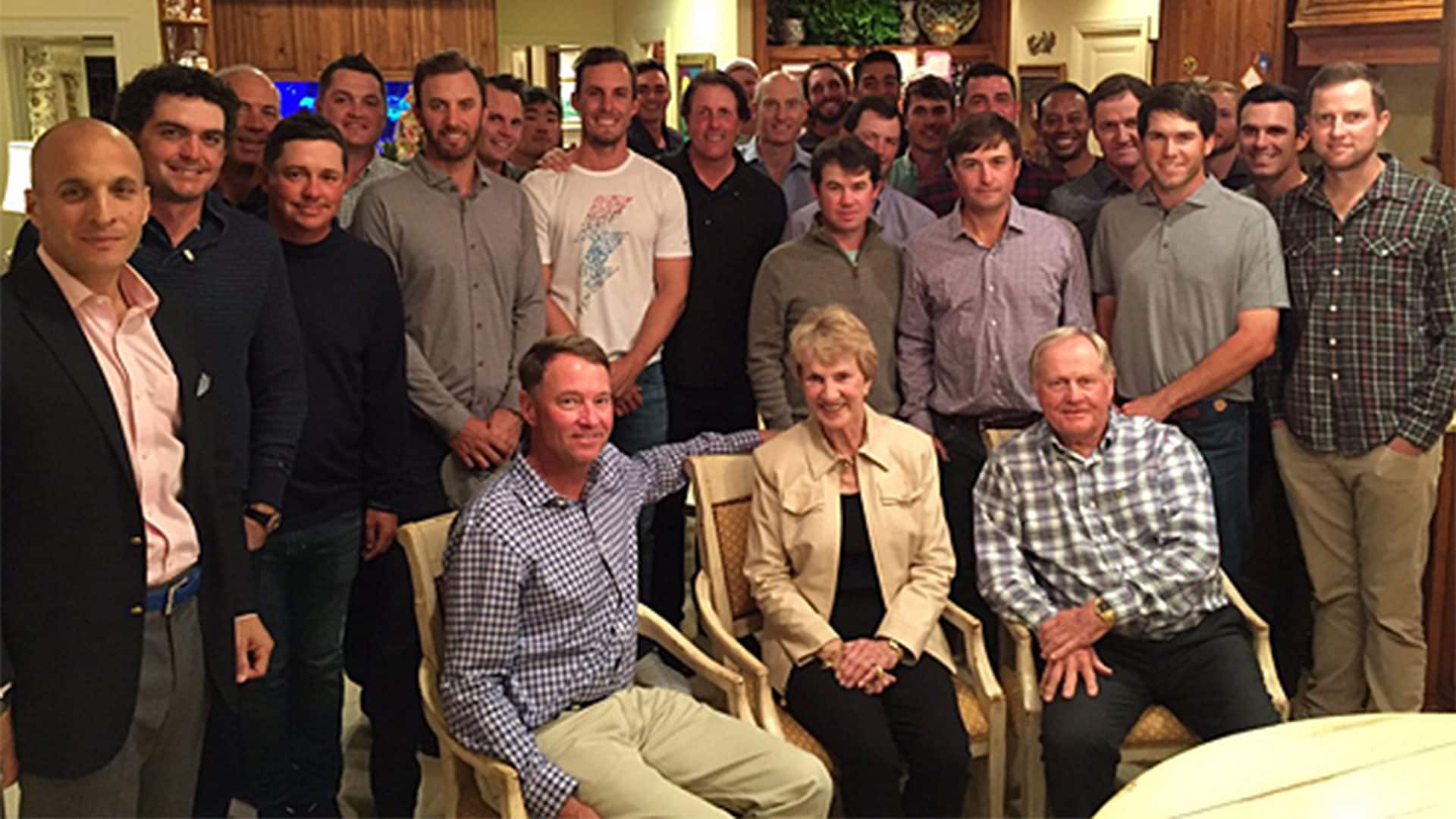 For potential U.S. Ryder Cup players it was dinner and a show this week at Jack Nicklaus’ home, complete with a pep talk from the Golden Bear himself and a cameo by Tiger Woods.

Golden moments. Whether all of the team building and tinkering will deliver a much-needed victory at this fall’s Ryder Cup remains to be seen, but there is no ignoring the level of commitment shown by everyone involved in this year’s matches.

Last year’s U.S. Ryder Cup task force gave us Davis Love III for his second turn as captain, an overhauled selection process and, at least according to those involved, a legacy plan to make the event competitive into the next decade.

Since then Love’s vice captains, a group that includes Woods, Jim Furyk, Steve Stricker and Tom Lehman, have been in regular contact and the U.S. captain, who said his preparation this time around is much more proactive.

“I think what I learned from last time, I thought I didn't need to focus on who the players were until later, until I kind of got a handle on who they were going to be,” Love said earlier this month at Pebble Beach. “This time around, I’m talking with my vice captains, we need to grab a hold of these guys right now.”

This week in South Florida, Jack and Barbara Nicklaus hosted a group of potential U.S. players at their home for an informal dinner that Love said via Twitter included, “incredible insight.”

Some two dozen players, at least that’s how many posed for a picture that Love tweeted, attended the dinner at the Golden Bear’s home, and although it might not help the U.S. side make more putts in October it certainly couldn’t hurt.

Great Scott. When the U.S. Golf Association and Royal & Ancient announced the move to ban anchoring beginning this year many figured the likes of Adam Scott would struggle with a return to a traditional-length putter.

The Australian, however, seems to be renewed by the change, finishing tied for second last week at the Northern Trust Open (where he ranked second in the field in putts made distance and converted 58 of 65 attempts from 10 feet and in).

Scott opened with an even-par 70 on Thursday at the Honda Classic (the scoring average for Round 1 was 72.3) and was 15th in the field in strokes gained-putting.

“I made so many great strokes and putts this week,” he said on Sunday at Riviera. “I feel like it's all in a really good spot. I'm excited about going into the Florida stretch and then getting to Augusta where I feel the greens are really the kind of grass that I like a lot and feel most comfortable on.”

Putting at Augusta National? Comfortable? Yeah, that sounds like a guy who is in panic mode.

Tiger sightings. The good news: Woods is swinging a golf club again. The bad news: According to a video the 14-time major champion posted on Twitter on Wednesday he’s currently limited to 9-iron shots in an indoor simulator (although Golf Channel insider Tim Rosaforte reported a source spotted Woods hitting drivers at the end of last week).

Woods didn’t provide a lot of detail on his competitive outlook following a third back procedure last September other than, “progressing nicely,” to go along with his tweet; but NBC Sports analyst Notah Begay III told the crew on “Morning Drive” on Thursday, “He’s moving along, progressing. He’s in a good frame of mind, and I think that’s the most important thing. It’s just about being patient with injuries.”

Woods, who hasn’t played since the Wyndham Championship in August, also attended this week’s Ryder Cup dinner at Nicklaus’ house.

While Tiger appears further down the road to recovery then some may have thought, there was this cautious footnote to this week’s update – there is still no timetable for his return to the PGA Tour.

Tweet of the week: @McIlroyRory (Rory McIlroy) “While you’re on your feet [Tiger Woods], do a few calf raises would ya?”

Good to see McIlroy, who engaged in a social media row with Golf Channel’s Brandel Chamblee last week regarding his efforts in the gym, can give as well as he takes.

South Florida sting. Sure, the folks at Honda just signed on for another half century (or something like that) to sponsor the Tour’s South Florida stop and the field this week is as deep as always, but there’s still something about the Honda Classic that leaves Cut Line cringing.

Without question, PGA National is an upgrade over the event’s previous digs – does anyone remember TPC Heron Bay? – but the layout, combined with perennially tough conditions, ranks right up there with a tax audit and root canal among the play-for-pay set.

Don’t get this twisted, Tour types have nothing against a “tough but fair” test, but PGA National always seems to shade too far toward the former.

The layout has ranked inside the top 11 toughest courses on Tour four out of the last five years, including a spot just behind Chambers Bay (U.S. Open) and TPC San Antonio (Texas Open) last year.

To be fair, the Honda Classic is one of the Tour’s most improved stops over the last decade, and there’s nothing wrong with the layout that a lawnmower couldn’t fix.