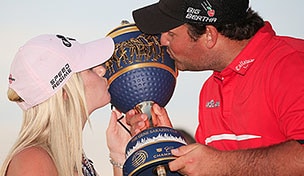 Innisbrook reinvigorated. About six months ago the Tour’s annual Tampa Bay-area stop was beyond life support. The event had already been played one year (2013) without a title sponsor, and a potential new sponsor had reportedly backed out at the last minute.

Out of time and options, the Tour turned to Pro Links Sports and Hollis Cavner, who manages a handful of Champions Tour events. The result was a four-year deal with Valspar to keep one the circuit’s most-liked courses in the fold.

The deal, however, goes well beyond a large check and some spots in the Wednesday pro-am. Cavner told Cut Line this week the key to keeping Innisbrook off the chopping block in the future is to engage the community throughout the year and make the Valspar Championship a can’t-miss event, like stops in Scottsdale, Hartford and beyond.

Give Cavner and Valspar credit for stepping in to save the event, but the real accomplishment is a new vision for an old staple.

Tough love. Some pep talks are better than others. Consider Gary Woodland’s recent exchange with Kansas basketball coach Bill Self.

Woodland, who played Division II basketball before transferring to Kansas to focus on golf, left last month’s WGC-Accenture Match Play Championship and stopped at his alma mater on his way back to Orlando.

At a post-game gathering, Self overheard Woodland telling someone how disappointing it was that he blew a 3-up lead in his first-round match against Graeme McDowell at Dove Mountain.

“He pulled me to the side and really got in my face,” Woodland said. “He told me that great players fail all the time. The important thing was to move on and learn from it.”

And what did Woodland make of the impromptu pep talk? “I couldn’t say anything. When coach speaks people listen,” he said.

St. Patrick. Maybe three PGA Tour victories in 14 starts does strange things to one’s psyche. Maybe we expect too much from a 23 year old suddenly thrust into the spotlight.

Either way, Patrick Reed’s comments following his victory at last week’s WGC-Cadillac Championship rubbed many – including some of his Tour frat brothers – the wrong way.

“I’ve worked so hard. I’ve won a lot in my junior career, did great things in my amateur career, was 6-0 in match play at NCAAs, won NCAAs two years in a row, was third individually one year.

Now I have three wins out here on the PGA Tour,” Reed said. “I just don’t see a lot of guys that have done that, besides for Tiger Woods, of course, and all of the other legends of the game.”

Confidence is a crucial part of any Tour player’s DNA, and it’s impossible to pick apart Reed’s game considering his run of late. It seems the only tool he is missing on his quest to become a top-5 player is a filter.

Tweet of the week: @JohnPetersonLSU “I love Patrick Reed’s interview. Dude speaks how he feels. People today could not have handled Muhammad Ali.”

The Donald’s desire to build the hardest track on Tour didn’t sit well with some – in Trump’s defense the combination of vicious winds on Friday and a tougher-than-expected setup contributed to last week’s high scores as much as Gil Hanse’s redesign of the Blue Monster – but never doubt the man’s commitment.

According to Trump, he’s invested some $200 million into giving Doral a much-needed facelift and that’s good for golf. Just ask him.

“It could be the most difficult course on Tour if they wanted to set it up that way,” Trump boasted.

During a reception last Wednesday, Trump filled the room with his unique brand of rhetoric and hyperbole and the thought occurred, for better or worse, they don’t build them like The Donald anymore.

Show up, keep up and ... well, you know. If the World Golf Hall of Fame ever opens its doors to caddies, and it should, Steve Williams would be a first-ballot inductee.

Still, Williams’ assessment last week that he and former boss Tiger Woods have not “buried the hatchet” is another example of misguided self-importance.

“I haven’t sorted anything out with him,” Williams told Australia's Fox Sports. “There’s been a lot of ... this, that and the other ... but the hatchet hasn’t been buried.”

The Woods-Williams split was not pain free, most divorces aren't, and perhaps the New Zealander has come by his estrangement honestly, but it just seems the legendary looper has missed a perfect chance to take a trip down the high road.

Late Wednesday at Innisbrook during an extended conversation with one Tour caddie, Cut Line was reminded by the bagman not to quote him. Caddies, he explained, shouldn’t be quoted because it is the player, after all, who should be the focus.