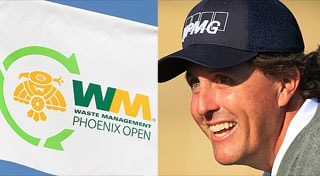 In honor of the toughest – and most creative – crowd in golf at this week’s Waste Management Phoenix Open, your correspondent takes a hard line on a collective meltdown Down Under, a letdown in logic at the Qatar Masters and an inexplicably prolonged countdown for an Olympic venue.

Sweet 16th. In a game mired in a monotonous march of stroke-play events and declining participation, TPC Scottsdale’s 16th hole is golf’s home run derby and slam dunk contest all rolled into a singularly raucous package.

Most players admit they wouldn’t want a steady diet of party holes like Scottsdale’s 16th each week, but as a one-off it is largely embraced.

“It's probably my favorite par 3 on Tour,” Rickie Fowler said. “You walk in, it's a full stadium, and a lot of times come Friday, Saturday, you're almost playing it a little bit shorter just because when you get in there you get pumped up a bit and the ball seems to go a little bit further.”

Golf’s version of the WWE may not be worth replicating, but for one week a year it’s worth every cheer and jeer.

Arron Oberholser. The last time AO hit a shot that counted on the PGA Tour George W. Bush was in the White House and Tiger Woods was still firmly planted atop golf’s hierarchy.

Following endless hours of rehabilitation and multiple hand and hip surgeries one of the circuit’s most affable players returned to the fold this week for the Waste Management Phoenix Open. It is his first Tour start since the 2009 Frys.com Open.

The Scottsdale resident turned 37 on Thursday and was serenaded by the boisterous masses on the 16th tee, missed the green with his tee shot, was soundly booed and signed for an opening 72.

“Tough crowd indeed,” Oberholser tweeted. “But so much fun. (No.) 16 is the coolest hole in pro golf.”

Blame it on Rio. Reason No. 987 why golf may have been better off without a seat at the Olympic table: the selection of an architectural team to design and build the host course for the 2016 Games has been pushed back until March.

The eight finalists for the design bid expected the announcement to be made Friday but the selection committee, which is of unknown size and makeup, is delaying the news until the International Olympic Committee is in Brazil next month.

This move further delays what has been an exceedingly drawn-out process, even by golf standards, and will limit the amount of time the winning bid will have to build an appropriate venue. This may come as a surprise to the IOC, but designing golf courses is a tad more complicated than simply growing grass.

Pro Bono work. Give Phil Mickelson credit for wanting to upgrade Torrey Pines’ North course and serious style points for offering his architectural services free of charge, but Lefty set off alarms with his vision of a nip/tucked North last week.

We’ve heard this before, back in 2001 when Rees Jones dutifully reworked the South course into shape for the 2008 U.S. Open. The retooled South delivered one of the most exciting championships in modern history by creating a demanding layout that quickly fell out of favor with the locals, including Mickelson who has become one of the most outspoken critics of Jones.

Lefty’s heart and handiwork are in the right place; we just hope he doesn’t inadvertently spoil one of the most soulful walks in all of golf.

Blunder Down Under. These are the facts. Annie Choi, Corie Hou and Inhong Lim teed off Thursday at the Australian Ladies Masters with what can only be described as a loose understanding of the local rules, signed for rounds of 70, 81 and 80, respectively, and were rounded up in what must be the first triple disqualification in the history of the game.

Tweet of the week: @StewartCink “I’m not injured, except for [a] slightly bruised ego.” The former British Open champion sent fans and media types scurrying for information after signing for an opening-round 83 in Scottsdale. You have to love that kind of honesty in 140 characters or less.

European Tour. It is the enablers, not the enabled, that have missed the mark when it comes to John Daly.

After Daly played his own version of wash, rinse, repeat late last year at the Australian Open he should have become persona non grata anywhere players are paid to play the game.

Instead officials at this week’s Qatar Masters, with what must have been tacit approval by the European Tour, decided ticket sales and exposure were more important than upholding principles and extended an invitation to Daly.

On Thursday Daly said he was “shocked” he played so well on Day 1 in Qatar. Not as shocked as Cut Line is that there seems to be no statute of limitations on second chances when it comes to “Long John.”