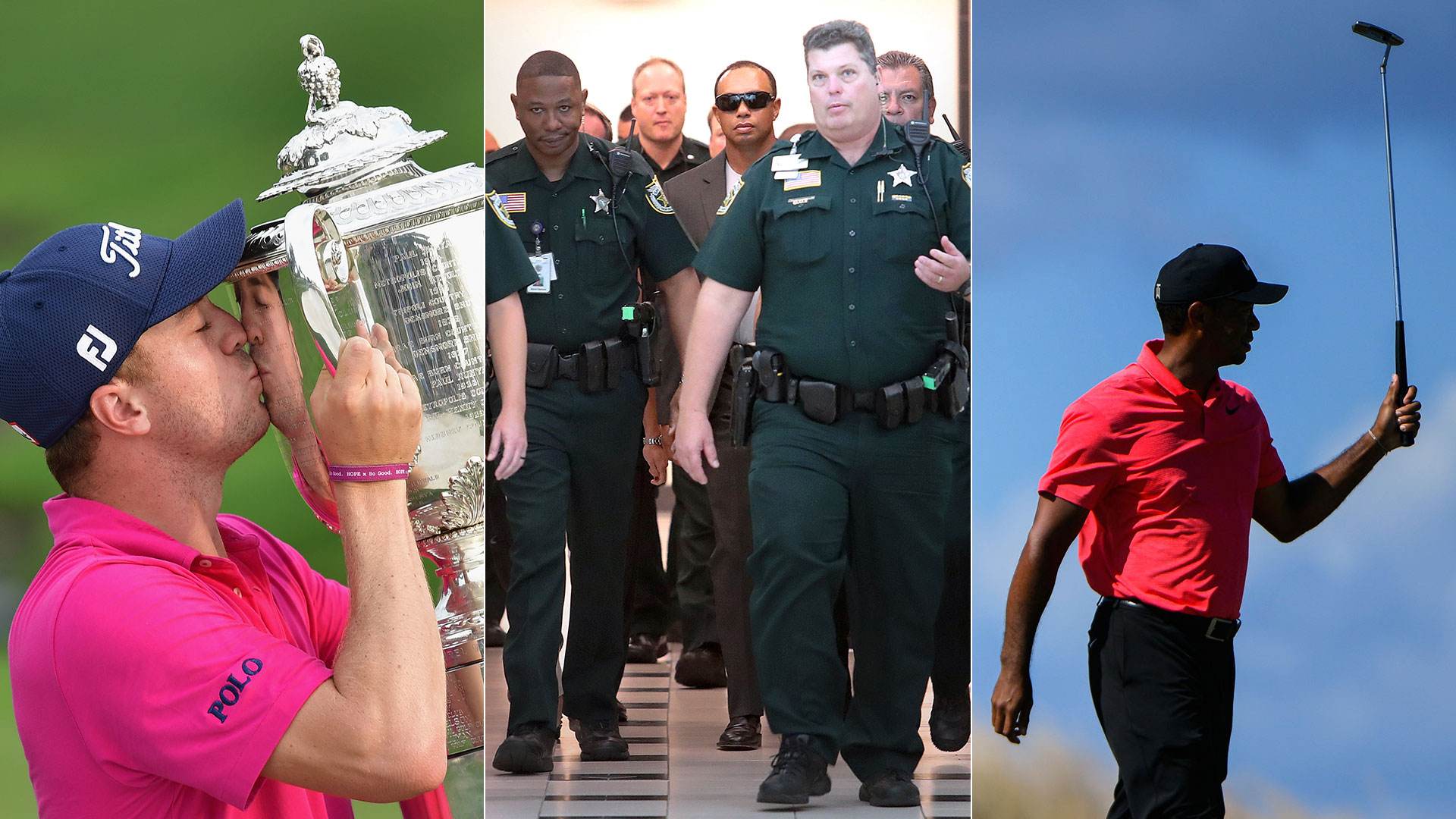 From Maui to Manhattan, Justin Thomas emerged as the year’s most compelling player and leads Cut Line’s final breakdown of 2017.

Making a statement. Before this year, Thomas was a solid player with a decent resume and a single, curious qualifier – he’s Jordan Spieth’s friend.

The two twenty-somethings have been friends since their junior golf days and the relationship had a tendency to overshadow Thomas’ play, but that all changed in 2017.

Paired with Spieth for Round 1 at the Sony Open, Thomas shot a 59 on his way to the Hawaiian sweep with victories at the Tournament of Champions and in Honolulu.

In August, Thomas completed his transformation with his breakthrough at the PGA Championship, but it was a month later at TPC Boston where the two young stars seemed to pass the metaphorical torch.

Spieth had just completed a final-round 67 and was speaking with the media when he abruptly paused his Q&A to congratulate Thomas, who won the playoff stop by three strokes over Spieth.

It turns out that Thomas can be Spieth’s friend and the Tour’s Player of the Year.

Meet the new boss. When Jay Monahan took over as PGA Tour commissioner in January there was uncertainty, would he be a transformative leader like Adam Silver in the NBA or would he settle for the status quo?

Although the answer is still a work in progress, if Monahan’s first 12 months on the job is any indication it would appear he’s cut from the former mold.

During Year 1, Monahan oversaw the implementation of the circuit’s new strength of field requirement, which helped tournaments attract stronger fields without violating the spirit of the independent contractor’s freedom, and a policy this season to inject new life into pro-am rounds.

Monahan’s biggest challenge, however, looms with the overhaul of the Tour schedule, a dramatic alteration that began with the PGA Championship moving to May and The Players to March beginning in 2019.

With countless interests involved – from sponsors to tournament committees and television executives – it’s hard to imagine there isn’t some collateral damage when the ’19 schedule is finally revealed, but so far Monahan has proven adapt at both embracing change and creating compromise.

Years apart. Perhaps when Tiger Woods thinks back to 2017 it will only be those bright moments when he returned to the game he loves without pain and reservations that come to mind.

It will be those four days in the Bahamas when his first tournament in 10 months gave the former world No. 1 a legitimate reason to be optimistic about the future after so many false starts and missteps.

Of course, that would be a wildly selective effort considering that he began his year with a missed cut at Torrey Pines followed by a poorly thought-out trip to Dubai where he only managed to play 18 holes before withdrawing.

There was fusion surgery on his lower back in April – a procedure, he has conceded, that left him contemplating life without golf – and his arrest for DUI on Memorial Day in south Florida.

But somewhere during those dark times, Woods began enjoying the simpler things, like playing with his children or having dinner with friends. His dramatically improved health explains much of those quality of life enhancements, but as he closed his year last week at Albany this was about more than simply being pain free.

This was about being happy.

No match. Depending on who you ask, this year’s Presidents Cup was either a seminal moment for the matches or a disaster.

Liberty National provided the perfect backdrop for what turned out to be the most lopsided defeat in the event’s history, a beating so thorough that some suggested it may have been better if the U.S. team closed out the Internationals on Saturday (which almost happened).

“It's not what I flew back over for, that's for sure,” Adam Scott said of the eight-point loss to the U.S. “I could have quite easily stayed home with my new kid and had a good break from the game. But I've always taken something positive from this event.”

Scott was trying to take the high road, which is becoming increasingly difficult for the Internationals; but if the Tour takes anything from this year’s matches it’s that something has to change if the Presidents Cup is going to grow.

Failed experiments. For the second time in three years the USGA took its most important event to an unproven golf course with mixed results.

At nearly 7,800 yards, Error Hills, eh, Erin Hills was supposed to be the answer to the modern game, a sprawling ballpark that would tame the bombers; but instead the Wisconsin layout yielded record low scoring and a largely forgettable week.

This is no reflection on Brooks Koepka, who played nearly flawless golf and is destined to win more majors, but following the issues the USGA faced at Chambers Bay in 2015 it’s becoming increasingly difficult to understand the association’s affinity for the unproven.

Perhaps there’s nothing wrong with the U.S. Open that a return to Shinnecock Hills next June can’t fix, although the 2004 championship at the Southhampton, N.Y., staple didn’t exactly go to script.

“That will not happen again. If it does, I’m retiring,” joked USGA executive director Mike Davis of the agronomic issues that plagued the ’04 U.S. Open.

Political motivations. When the Tour uprooted its event at Trump National Doral for Mexico City this year officials stressed that the move had nothing to do with the presidential election.

A year later, when President Donald Trump agreed to attend the Presidents Cup, Monahan again tried to distance the Tour from the polarizing world of politics.

The Tour’s desire to stay above the political fray is understandable, but last week politics came looking for the Tour.

Although the item was removed at the 11th hour, the Senate’s tax-reform act included a provision titled “Repeal of Tax-Exempt Status for Professional Sports Leagues.”

It’s unclear how or why the provision was removed from the act, but the item sent a clear message to the Tour, and other organizations in golf, that not all politics is avoidable.

Tweet of the year. @GraysonMurray (Grayson Murray) “Does anyone really care is the real question ... those guys were relevant 10 plus years ago.”

The first-year Tour player was responding to a tweet about Bernhard Langer’s season on the PGA Tour Champions, and his ill-advised missive drew plenty of blowback, but the only thing that really needed to be said was, no, just no.