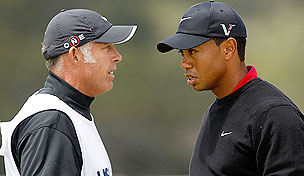 Like Kubler-Ross’ five stages of grief, there is a traditional flow when a Tour type begins a freefall into a competitive abyss. Normally the road kill would be: caddie, wife, manager, equipment/apparel affiliation, corporate deals and swing coach. So far, only Tiger Woods’ manager Mark Steinberg has escaped completely unscathed.

Wednesday’s news that Steve Williams had been handed a pink slip was particularly surprising given the caddie’s loyalty to his boss through Woods’ post-2009 scandal and the duo’s track record – 13 of Woods’ 14 majors came with Williams at his side.

One source familiar with the situation called the move “shocking,” so much so a “missed cut” in this week’s edition of Cut Line hardly does the firing justice.

Darren Clarke. He smiled, he swigged, he proved that something special can happen – even at Royal St. George’s. As 150-to-1 long shots go the Ulsterman proved to be straight out of central casting – a 42-year-old widower with a balky putting stroke and enough competitive baggage to require not one but two sports psychologists on speed dial.

Clarke may not have been an immediate favorite in American circles, but the storytellers in the United Kingdom could not have asked for a better champion – not Rory McIlroy, not Graeme McDowell, not even Lee Westwood.

The defining moment for Clarke came late Sunday when a familiar U.K. golf writer attempted to ask the champion a question:

“Hang on, let me just scratch my little head. I'm trying to recollect your little line,” Clarke smiled widely. “’He's in his inexorable slide toward irrelevance.’ Is that what you said?

“This is a mirage,” he said as he playfully pointed to the claret jug.

Tom Watson. Old Tom has turned the game’s oldest championship into one, long swansong as he refuses to go quietly into that good night – as they would poetically muse in the south English dunes.

On Sunday, having flirted with Open history . . . again, Watson was asked about a pre-championship trip to Normandy and some of the World War II monuments.

“Oh, there are a lot of things that can move me,” he said. “That particular turning point in World War II certainly was a feat extraordinaire.”

We feel the same way about Old Tom.

On Monday, less than 24 hours after Royal Portrush member Darren Clarke’s emotional victory at Sandwich, Dawson seemed a little more open to the idea, “We’ll take a closer look at Portrush,” he allowed, before adding, “What it doesn’t have, I don’t know yet until we’ve had another look at it. But I have agreed to look.”

What it does have is a golf course as good as any in the Open rotation, an adjacent course with plenty of open land and a motorway link directly to Belfast that would make last week’s gridlock at “Sandwich-ed” a distant memory.

What the R&A is really looking for is peace, which is in short supply in Ulster this time of year. And it’s not likely to simply materialize as long as the R&A refuses to make eye contact with the elephant in the Northern Irish room.

Evian Masters. The LPGA can name every event on its schedule a major for all we care, but that doesn’t change the reality that it is the players, not the media or fans or tour officials, who decide grand slam status.

On this the LPGA has history on its side. The du Maurier Classic was immediately considered a major when it was added to the fold in 1979 and remained there until it fell off the docket in 2000 and was replaced by the Women’s British Open.

There is, however, a sense of economic expediency that gives the Evian move a week-old cheese smell. The tour has been hit particularly hard by the global financial crisis, but doling out grand slam shingles to the highest bidder feels more like a finger in a dam than a long-term solution.

RBC Canadian Open. In the hyper-competitive world of PGA Tour events tournament directors and sponsors look for any edge to give them an advantage and although the Royal Bank of Canada didn’t break any PGA Tour rules landing this week’s field it certainly appears as if they are bending a few.

The banking giant – which took over sponsorship of the Canadian stop in 2008, and also signed on to sponsor the Hilton Head Island event earlier this year – has slowly signed a stable of high-profile players to lucrative endorsement contracts in recent years.

Among that group is current world No. 1 Luke Donald, Matt Kuchar, Ernie Els, and Anthony Kim. It’s no surprise then that the four-some made the long flight from England to the Pacific Northwest for this week’s event.

We’re not saying players like Els, who hadn’t played the Canadian Open since 1998, schlepped halfway around the world as a result of their endorsement deals with RBC, but if it quacks like an appearance fee it probably is.

U.S. Golf Association. “Cut Line” is a proponent of any measure that will help speed up play, particularly for those groups that sneak out in front of our Saturday morning four-ball, but this week’s ruling at the U.S. Junior Amateur may be the wrong execution of the right idea.

Connor Klein didn’t have much time to celebrate his hole in one during Monday’s first round of stroke-play qualifying when he was informed by an official that all three players in his group would be penalized a stroke for slow play.

The group appealed the ruling and only Klein was penalized the stroke, which resulted in a birdie on the hole instead of an ace. It was the only penalty of the day for slow play.

There was a silver lining for Klein, who advanced to the match-play portion of the competition and likely spared himself from having to buy a round of milkshakes at the 19th hole to celebrate the ace.

Tiger Woods. There is no way to know exactly what transpired between Woods and Steve Williams, the details lost behind the cloak of Tiger Inc. Maybe the longtime looper overstepped with his moonlighting activities with Adam Scott, or perhaps it was a previous transgression that tipped the scales.

Although Woods’ release on Wednesday announcing the split made the move appear amiable, the New Zealander – who has caddied for an assortment of players to an estimated 120 worldwide victories – said he was “shocked and stunned.”

“After 13 years of loyal service needless to say this came as a shock. Given the circumstances of the past 18 months working through Tiger's scandal, a new coach and with it a major swing change and Tiger battling through injuries I am very disappointed to end our very successful partnership at this time,” Williams said.

Caddying is a tough business, but somehow it feels like Williams’ life just got a little easier.