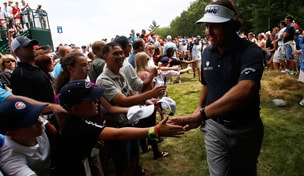 Getty Images
NEWPORT, WALES - OCTOBER 03: Miguel Angel Jimenez of Europe celebrates with Peter Hanson (R) on the 18th green during the Fourball & Foursome Matches during the 2010 Ryder Cup at the Celtic Manor Resort on October 3, 2010 in Newport, Wales. (Photo by Jamie Squire/Getty Images)  -

From Phil Mickelson’s move to quality over quantity to the PGA Tour’s misguided notion that limited fields provide unlimited benefits, this week’s edition examines the science of diminishing returns.

When less means more. To say that Phil Mickelson has been guilty of over-thinking things over the course of his Hall of Fame career is an understatement. This is, after all, the same guy who played a U.S. Open without a driver in his bag and a Masters with two drivers.

But given Mickelson’s performances in this year’s top events, his decision to curtail his schedule in future years in order to peak for the majors seems less questionable than it does a qualified breakthrough.

“My whole purpose and focus will be ... participating in certain tournaments that will help me play well in those majors,” Lefty said this week. “A tournament that is taking place two months prior or after a major championship that has no impact on my ability to perform well in a major, those are tournaments that I won't put as much importance on.”

Only time will tell if tailoring his schedule will deliver a U.S. Open title and the final leg of the career Grand Slam, but it certainly can’t hurt. Mickelson suggested earlier this year he would trim about 25 percent of his starts in future seasons.

Talent has never been an issue for Mickelson. When properly motivated the southpaw is virtually unbeatable (see Championship, Open 2013), and if logging fewer miles on the G5 is the tonic for success then so be it.

Holding court. Attorneys for the PGA Tour and Vijay Singh met for the first time this week in the New York Supreme Court’s Commercial Division to argue a motion to dismiss the Fijian’s lawsuit stemming from his dust-up with the circuit’s anti-doping program.

Judge Eileen Bransten heard arguments from both sides on Thursday and although no ruling was forthcoming the case seems as complex as it is contentious.

Singh admitted in a January article on SportsIllustrated.cnn.com to using the Ultimate Spray, which contained the substance IGF-1 (insulin-like growth factor), which is banned by the World Anti-Doping Agency and the Tour. He was later absolved of the violation when WADA issued a statement stipulating that taken in such small amounts IGF-1 was not a violation unless it resulted in a positive test. Singh has never failed a drug test.

About a month later, lawyers for the Tour filed a motion to dismiss Singh’s lawsuit citing his membership agreement, which stipulates his only avenue for relief resulting from a doping violation is via an arbitration hearing, which was canceled following the WADA announcement.

Cut Line is still not sure what benefits deer-antler spray provides, but judge Bransten may need some before this is over.

Playoff problems. As anyone in Ponte Vedra Beach, Fla., can tell you, applying the postseason concept to golf is not exactly a perfect fit, but the new format for the European Tour’s Final Series is even more confusing and flawed than the FedEx Cup.

Consider that under the new rules for the four-event Final Series, players must play at least two of the three postseason events to qualify for the DP World Tour Championship in Dubai, which considering the far-flung venues of the first three events (China and Turkey) is not exactly easy.

Compounding matters is the qualification criteria for the WGC-HSBC Champions, which is the second leg of the Final Series. Some players who are qualified for the European circuit’s postseason are not even exempt into next week’s World Golf Championship in China.

“If you are not in the top 20 in the world or so, you’re not going to know if you are in some of those events until the last minute,” said Rocky Hambric, the president of Hambric Sports Management. “How can you hold someone to that kind of standard? You have to play two out of three and you may not be in one of them.”

The result was a messy situation on Thursday at the BMW Masters, the first playoff event, when Joost Luiten hit his opening tee shot and walked off the golf course with an injury.

“Strange scenario today paired with Joost Luiten, he hit (his) drive off the first then withdrew with (a) shoulder injury, that one shot meant event counted for him” Luke Donald tweeted. “New Euro Tour rule this year states that you have to play at least two out (of) three events before Race to Dubai to be eligible. If that rule wasn’t in affect then Joost would have withdrawn prior to event and first reserve would have got to play this week’s event.”

It’s almost enough to make one pine for East Lake and all of those FedEx Cup algorithms. Almost.

When less is less. The PGA Tour’s transition to a split-calendar schedule has not exactly been painless for those who were counting on the fall starts to pad their positions on the FedEx Cup points list.

Part of the problem has been stronger fields at the first two 2013-14 stops (Frys.com Open and Shriners Hospitals for Children Open), which created a Catch-22 for the circuit. Deeper tee sheets are great for sponsors, but not so good for those Web.com Tour Final graduates who were counting on some early-season playing time.

Compounding the issue is this week’s CIMB Classic in Malaysia, which for the first time awards FedEx Cup points but features a limited, 78-man field. Not a single member of this year’s Web.com Tour category made it into the CIMB field.