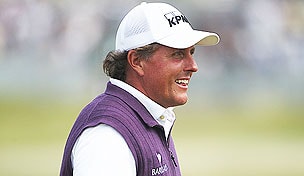 No need for a caucus or a primary, the PGA Tour has their man for another four years, and beyond, but Tim Finchem’s inauguration gift is more trouble in paradise. Why is it that “aloha” is starting to sound more and more like “goodbye” for the circuit?

The return of touchy, feely. Fresh from one of his worst putting years as a professional, which sent Phil Mickelson spiraling outside the top 100 in most putting categories and into the unorthodox clutches of a long putter, it is encouraging to hear Lefty is going back to something a little more unscientific.

“Phil has committed himself to playing more freely and mentally to getting away from mechanics,” said Mickelson’s swing coach Butch Harmon, who spent last week in Scottsdale, Ariz., working with the left-hander.

Eschewing mechanics may not be the answer, but a free-swinging Lefty is an entertaining Lefty.

Four more years. No, this isn’t a plea to keep President Barack Obama in the White House. It is in response to the PGA Tour Policy Board’s decision to extend commissioner Tim Finchem’s time in the Ponte Vedra Beach, Fla., big house.

The board extended Finchem’s contract through 2016 and although he’s not always been the most transparent commissioner – his dogged reluctance to publish player fines continues to be a curious diversion from the pro sport status quo – the former lobbyist is credited with guiding the circuit through one of its most challenging chapters.

Despite a prolonged recession and Tiger Woods’ 2009 scandal, Finchem maintained a full schedule, extended the circuit’s contracts with NBC Sports and CBS Sports through the next decade and, according to various reports, is close to renewing FedEx as the sponsor of the season-long points race and signing Hyundai to replace Nationwide as the umbrella sponsor of the secondary circuit.

Nor does this seem to be Finchem’s swan song. Although he will be 69 when his current contract expires, he didn’t sound like a man who is easing happily toward his golden years late Wednesday when Cut Line caught up with him.

“When I first became commissioner after five or six years people would ask me how long I wanted to do this,” Finchem said. “I don’t have a particular time frame in mind. I think it has to do with what’s best for the organization. ... I’m getting a little older so you have to ask yourself those questions a little more often, but I’m not worried about that right now.”

Magic Whan. The LPGA, for so long a “sell” item on the golf landscape, may be the leading candidate for comeback player of the year in 2012.

The circuit released its ’12 schedule this week to widespread acclaim. The 27-event lineup includes four more events than the 2011 schedule and a total purse that is nearly $7 million more than last year.

“We’re going in the right direction, and the best news is that I don’t think we are done yet,” said Mike Whan, the circuit’s second-year commissioner. “It is fun announcing this schedule, but it’s more exciting to me knowing there is more just around the corner.”

Seems rumors of the LPGA’s death were greatly exaggerated.

Tweet of the week: @JasonGore59 “Thank you everyone! Absolutely amazing!”

Gore was referring to a Twitter campaign that landed him a coveted sponsor exemption into the Northern Trust Open. It’s time, tweeps, to turn your considerable powers to something even more pressing – #SlowPlay.

Imperfect paradise. Much was made of the less-than-stellar field at last week’s Hyundai Tournament of Champions and an extended conversation with a Tour official made Cut Line realize that sometimes there is just no painting around warts.

For 10 minutes the official outlined why the half-dozen or so no-shows skipped Kapalua. By all accounts they were excused absences, from Lucas Glover’s paddle-boarding miscue to an assortment of New Year’s newborns.

So the question remains, other than outlawing paddle boarding and baby making how do you improve on a no-cut, free-money event held in paradise on a golf course with more room to miss than a Texas driving range?

That there is no material answer may be the most concerning thing of all.

Tweet of the week II: @Elkpga (Steve Elkington) “Possible pairing for AT&T. Is Tiger (Woods) and (Tim) Tebow? Awkward. What do they talk about for three days?”

The slow standard. Carping about slow play on Tour has become a cliché, like spotless black courtesy cars and anything John Daly does, but last week’s display at Kapalua renewed calls for something to be done.

Despite a 27-man field and a tee sheet of twosomes, the weekend telecast consistently went long because of the languid pace of play. “It’s not that hard, be ready when it’s your turn. Slow play is killing our sport,” world No. 1 Luke Donald tweeted.

Some complain that Tour officials are to blame for not issuing fines, but monetary penalties will not solve this. If the circuit wanted to get tough on slow play, they would assess one-shot penalties for every violation after an initial warning and publish the names of habitual offenders.

Writing checks is easy. Being saddled as a snail, well that doesn’t wash off.

Cross signals from the Crosby. Cyberspace is abuzz over which amateur, Tim Tebow or Tony Romo, Tiger Woods will be paired with when he makes his Tour debut next month at the AT&T Pebble Beach National Pro-Am. Remember the days when we would get worked up over which pro Woods was going to be paired with?