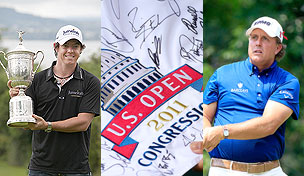 The Northern Irish Open, eh, make that the U.S. Open could well be the first of many major victories for young Rory McIlroy, but before we get ahead of ourselves let’s appreciate the 22-year-old’s accomplishment as well as the U.S. Golf Association’s acceptance of a Blue Course that yielded more red than the last midterm election.

U.S. Golf Association. It seems about right that the same week the USGA announced it was returning to Shinnecock Hills for the 2018 U.S. Open the organization would get blasted for the same kind of level-headed thinking that likely brought the storied New York venue back into the championship fold.

Shinnecock Hills, of course, was the site of the 2004 Open, the one most observers agree got away from the blue blazers. At Congressional, which is now being panned for being on the softer side of par last week, officials could have tricked up the greens in an attempt to protect par, but Rory McIlroy still would have won.

“I give all credit to the USGA,” said TV analyst David Feherty. “They could have sucked these greens bone dry with the SubAir system and tried to make them faster and all they would have done is make them unputtable. Believe me, that's the sort of mistake a few years ago that they would have made in a heartbeat.”

In this it’s better to ask for forgiveness, not permission.

Hearing the ‘Rors.’ When he won last year’s Quail Hollow Championship with a closing 62 there was reason to believe Rory McIlroy was indeed the complete package – style and substance.

When he rebounded from a closing 80 on Sunday at Augusta National with his historic victory at Congressional it was impossible to shake the feeling that something special was happening. That his father, Gerry, was waiting for him off the 18th green on Sunday only added to the storybook.

How do you make a world beater?

“His parents are unbelievably good,” McIlroy’s manager, Chubby Chandler, said earlier this year. “He’s sensible. He has good values. There is a bit of Darren Clarke in him here or there, but a lot of Rory McIlroy as well.”

Hilton Head. Lost amid McIlroy’s historic run was news last week the PGA Tour had finally landed some long-term financial security for the coziest event this side of Kapalua.

Royal Bank of Canada signed on to title sponsor the Lowcountry staple through 2016, ending months of speculation that one of the circuit’s longest-running and most-endearing events was going the way of the Dodo.

It’s also encouraging that the RBC Heritage will move back to its traditional post-Masters date beginning next year. However, there is no truth to the rumor that officials were going to replace the historic firing of the cannon with a slap shot from atop the island’s iconic lighthouse.

Tweets of the week: @PaulAzinger “Everyone was compared to Jack, especially Tiger. It’s inevitable that Rory is compared to Tiger now and Tiger at the same age. Enjoy it.”

International Final Qualifiers. Sure, they make life easier on the play-for-pay set and likely strengthen the field for next month’s British Open, but a recent conversation with Davis Love III reminded Cut Line of how cool it was seeing American pros schlep across the pond for the local qualifiers.

The local qualifiers are always played at classic, little-known gems like Royal Cinque Ports and Prince’s and produced compelling storylines. This year, however, just three Americans are signed up for local qualifying, including journeyman Scott Dunlap.

“Why wouldn’t you at least try it?” Love said last month at Muirfield Village. “I always thought you should do whatever you could to play in a major.”

Note to any pro not in the Open Championship field: the only way to win a major is to actually play in one.

Phil Mickelson. Lefty arrived at Congressional with a spark in his eye and a driving iron in his bag, was reduced to a spectator for Rounds 1 and 2 paired with McIlroy, and played the weekend in 6 over par to finish tied for 54th, just the third time in more than a decade he’s finished outside the top 20 at the U.S. Open.

Mickelson turned 41 last Thursday, hardly over the hill but the five-time Open runner-up is inching closer to the Sunday of his career. Lefty made it clear that he does not need a national crown to complete his Hall-of-Fame resume, but the mantel is going to be oddly bare without one.

Hurry-up historians. The numbers are nothing short of mind-boggling, 16 under par, eight strokes clear of the “B” flight, four rounds in the 60s, 62 of 72 greens in regulation. Simply put, McIlroy’s victory at Congressional was brilliant.

The hyperbole that followed, however, is at best premature and at worst blatantly unfair to the 22-year-old phenom.

“Potentially” being the key word. McIlroy is easy to like and his swing is nothing short of artistic. But before we welcome in golf’s “new era” let’s give the kid a chance to grow. Given the chance, he may even surpass all those wild expectations.

Doctor’s orders. Speaking of expectations, perhaps it’s a measure of how far the public’s 2011 prospects have fallen for Tiger Woods that his announcement this week that he will not play AT&T National was little more than a footnote.

There seems little chance that Woods will recover from his left knee and Achilles injury in time for next month’s Open Championship, and maybe it is best that he’s become such a model patient considering the extent of his injuries.

“I’m listening to my doctors and allowing time to completely heal,” he said on his website.

Still, it’s never easy to accept that the game’s biggest draw may sit out the remainder of the season. Best guess: we won’t see Woods between the ropes before the WGC-Bridgestone Invitational in August.