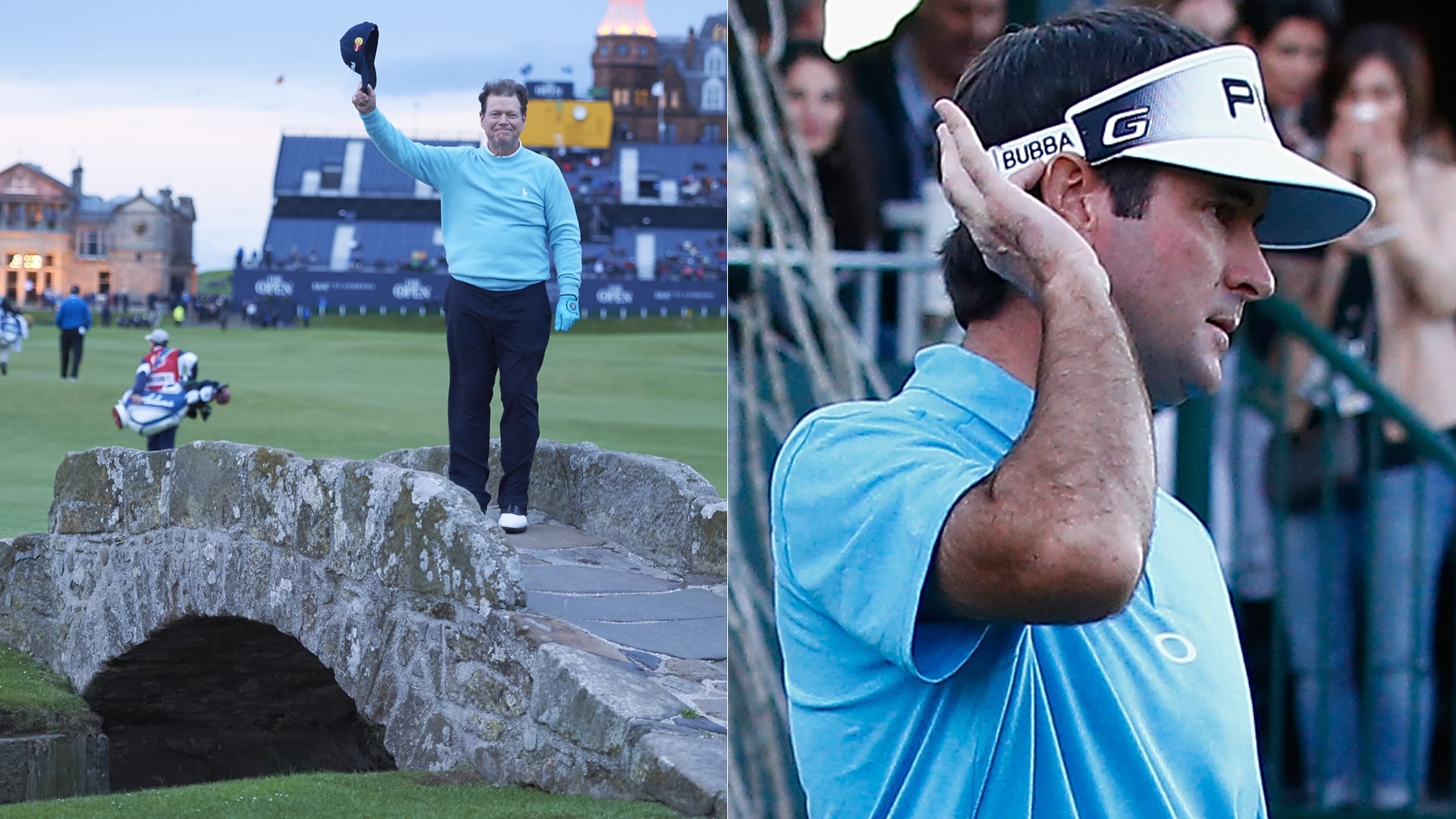 Golf, like real estate, is all about location, location, location. The over-50 set, for example, enjoyed a dramatic upgrade this week with news that the Senior Open Championship is bound for the Old Course; while Bubba Watson would rather be, well, anywhere that’s not TPC Scottsdale.

Seniors to St. Andrews. With apologies to Augusta National, Pinehurst and Pebble Beach, there is no better place to hold a tournament, be it a major or otherwise, than the Home of Golf and news this week that the R&A will bring the Senior Open Championship to the Old Course for the first time qualifies as a major victory.

“They have allowed not just me, but many other great champions, an opportunity to return to a venue that means so much to everyone who plays the game,” said Tom Watson, who thought he’d taken his final stroll down the Old Course’s 18th fairway at last year’s Open.

From the quirky, ancient links to the Auld Grey Toon, everything about St. Andrews makes championships special and the 2018 Senior Open will be no different.

Looping legend. There are no caddies in the World Golf Hall of Fame, but if there were, Dave Renwick would be a first-ballot addition.

Renwick died on Feb. 4 after a lengthy battle with cancer. The 62-year-old was on the bag when three different players won major championships, starting with Jose Maria Olazabal at the 1994 Masters.

The next year he caddied for Steve Elkington when the Australian won the 1995 PGA Championship, but he enjoyed the most success while working for Vijay Singh, who he teamed with in June 1997.

Renwick worked for Singh when the Fijian won the 1998 PGA Championship, ’00 Masters and ’04 PGA Championship, the latter a season that included nine victories on the PGA Tour and Singh ascending to No. 1 in the Official World Golf Ranking.

Tweet of the week: @thomaslevetgolf (Thomas Levet) “RIP Dave [Renwick]. You will be missed on tour, one of the top caddies if not the best.  #daverenwick”

“Gimmegate” revisited. You know the deal: if the headline is big enough, the news is big enough; and the LPGA’s decision to pair Suzann Pettersen and Alison Lee on Day 1 at the Coates Golf Championship was an example of this axiom.

“What happened back five months ago, I can barely remember,” Pettersen said.

To refresh Pettersen’s memory, Lee was a little too quick to rake a putt during her fourball match against Pettersen at last September’s Solheim Cup. The American thought the putt had been conceded and the incident led to a furor over sportsmanship.

The reunion went off without incident after Lee was able to get a pre-round nosebleed under control and both players dismissed the notion there are any unresolved issues.

As for the pairing it seemed a tad forced – that is, of course, unless you subscribe to the notion that the computer “randomly” spit out that pairing – but people are talking, which is never a bad thing.

Wheels of justice. Wednesday marked the one-year anniversary of the lawsuit filed by a group of caddies – which has ballooned to more than 160 plaintiffs – against the PGA Tour for what they claim are unpaid endorsement fees.

Little has changed since the original complaint was filed in U.S. District Court in San Francisco, with the majority of work in recent months focused on a request for a venue change (which was denied) and the Tour’s motion to dismiss the lawsuit (which is pending).

Both sides are currently in a holding pattern while judge Vince Chhabria considers the motion to dismiss, and the next management conference is scheduled for later this month.

In short, the court doesn’t appear to be in any rush to decide this case. As Sun Tzu once famously wrote, “The wheels of justice grind slow, but grind fine.”

Being Bubba. By any measure, TPC Scottsdale is a bomber’s golf course. Look no further than the list of champions at the Waste Management Phoenix Open – Brooks Koepka, J.B. Holmes, Phil Mickelson, et al – to prove the point.

That, however, didn’t stop Bubba Watson, the poster child for the bombing set, from venting this week that the new and improved TPC Scottsdale isn’t to his liking.

“I don't like it. I'm not going to PC it. I don't like it at all. I just mentioned why I'm here. I've got three beautiful sponsors that love it here,” Watson said.

Despite having finished runner-up twice at TPC Scottsdale, which underwent a renovation before last year’s event, it’s Bubba’s Phoenix-area sponsors – Ping, Stance Socks and Oakley – that drew him to the Valley of the Sun, not a wide open golf course that favors the long ball.

The media should celebrate honest, unfiltered answers, but in the case of Bubba an “honest take” shouldn’t be an excuse for fundamentally flawed logic.

Follow the money. Late last year at the Hero World Challenge Tour commissioner Tim Finchem was asked his thoughts on appearance fees, which are not allowed in the United States but regularly lure top players to overseas events like last month’s Abu Dhabi HSBC Golf Championship.

“There isn't anything happening out there that would say the guidelines are starting to get pushed by players in typically unique situations,” Finchem said. “Certain places have a fair amount of appearance money and it can, in turn, go to the player’s head.”

Appearance fees have become a talking point in recent days following world No. 1 Jordan Spieth’s jet-setting schedule to start the year with events in Maui (Hyundai Tournament of Champions), the United Arab Emirates (Abu Dhabi) and the Singapore Open.

But it’s the thinly veiled appearance fees that have been largely overlooked by the Tour. Rickie Fowler won the Abu Dhabi stop and flew directly to San Diego to play last week’s Farmers Insurance Open, where he missed the cut.

It’s safe to say Fowler wouldn’t have played Torrey Pines if Farmers Insurance weren’t one of his sponsors. To be fair to Fowler, there are dozens of Tour players with similar sponsorship deals that influence schedules.

It’s become a common practice driven by a competitive marketplace, the free market at work. What seems out of place, however, is Finchem’s decision to take such a high-minded approach to traditional appearance fees while ignoring the more nuanced version here in the United States.