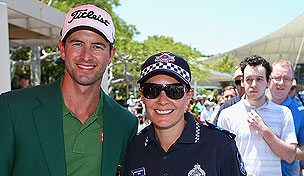 In this week’s edition PGA Tour caddies unite, the circuit expands and Brandt Snedeker loses a bout with a Segway scooter in Shanghai. According to various sources, however, the American star is recovering and not at all interested in a rematch.

A well-intended loop. As a group, PGA Tour caddies are an optimistic lot. Waiting around the next dogleg is another tee time, another chance for success in a game that is filled with far more valleys than peaks.

On Tuesday at Sea Island (Ga.) Resort, a group of caddies took the ultimate optimistic plunge with the creation of the Association of Professional Tour Caddies (APTC). The APTC is not a union; like their bosses, caddies are independent contractors, and its initial mission statement is to provide its members with employment basics – health insurance, retirement plans.

For those who organized the APTC, however, the association is more than a negotiating tool.

“It’s a new age of caddies. It’s more of a profession. It’s a different breed,” said James Edmondson, Ryan Palmer’s caddie who was elected president of the APTC. “It’s the time now to enhance the profession and make it better for the guys who are coming up behind us.”

Add another rule to the caddie credo: show up, shut up, keep up and, now, speak up.

Great, Scott. Your scribe is currently on assignment in Australia working on various stories, but we were jarred out of our insular cocoon earlier this week when a nurse at a Melbourne-area hospital pointed at a television and said how wonderful it was that Adam Scott, the Masters champion, had returned home with the green jacket.

Do you play golf, we asked?

To get an idea of how significant Scott’s Masters breakthrough was, ask an Aussie where he was in April when the Australian outlasted Angel Cabrera at Augusta National (keep in mind, the back nine on Sunday at the year’s first major is early Monday morning in Oz), they can tell you exactly where they watched the historic event and what they broke during the celebration.

Far reach. For the third consecutive year, the PGA Tour will expand its brand with the addition of the PGA Tour China in 2014.

The new tour will begin in March 2014 with 12 events that feature purses of about $200,000 and will provide the top five money winners access to the Web.com Tour. In the fall of 2012 the Tour debuted the PGA Tour Latinoamerica with 11 events in seven countries, and this summer the PGA Tour Canada held nine events.

“The East will take over the West in the game of golf within a generation. When you have 1.4 billion people getting a taste of golf they will accelerate their progress,” Greg Norman, an advisory coach for the China National Golf Team, told Golf Channel’s "Morning Drive" crew on Sunday.

An organization that once seemed to have misplaced its atlas – three of the four World Golf Championships events are played in the Lower 48 – has suddenly gone global.

Tweet of the week: @PaulAzinger “Putting is like the ghost of golf, talk bad about it and it will haunt your dreams.”

Occupational hazards. Mayhem happens; it’s why college football Saturdays are filled with insurance commercials, and it’s hard to find fault in Brandt Snedeker’s most recent trip to a magnetic resonance imaging machine. But given the American’s checkered health history, a little restraint would have been in order this week.

Sneds injured his left knee while hopping off a Segway scooter during a corporate outing on Monday at Sheshan International Golf Club in Shanghai. According to his management team, Snedeker bruised his tibia and strained his ACL in the incident and had to withdraw from this week’s Australian PGA Championship.

Considering Snedeker’s health history – he missed more than a month this year with an ailing rib – may we suggest he stick with things that have four wheels.

Sidebar. We live in a litigious society, but if the initial bout between lawyers for Vijay Singh and the PGA Tour is any indication, the Fijian’s lawsuit against the circuit promises to be particularly nasty.

New York Supreme Court judge Eileen Bransten heard arguments for and against the Tour’s motion to dismiss Singh’s lawsuit, which claims the circuit publicly humiliated him earlier this season when he was accused of an anti-doping violation that was later dismissed.

One of the more explosive revelations from the Oct. 23 hearing was a claim by Singh’s lawyers that the Tour has ignored similar violations in the past.

No word yet on how Bransten will rule on the current motion to dismiss, but if this case goes the distance it could be the most heated match on Tour in 2014.