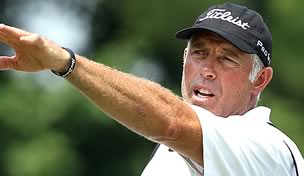 There were 1.019 million strokes taken this season by PGA Tour members, 50,841 birdies, 39,014 bogeys and more than enough heroics, hashtags and hyperbole to qualify 2011 as a happening.

This was the year words with friends became, well, less friendly, greatness was given a new benchmark in the form of a wildly understated 22-year-old from Taiwan and a new generation took a giant leap forward.

Rory McIlroy. In a recent interview in The Guardian the Ulsterman called 2011 “the year I grew up,” and the calendar featured miscues (Masters) and masterpieces (U.S. Open) all there for the world to diagnose and digest.

McIlroy recovered from his Masters meltdown, a closing nine of 43 that dropped him from four strokes clear of the field to begin the day to 10 shots behind eventual champion Charl Schwartzel, with a commanding performance at Congressional.

Along the way McIlroy moved to No. 2 in the World Golf Ranking, started dating No. 1 in the tennis world, tweeted before he thought when announcer Jay Townsend criticized his caddie and ran afoul of the U.K. press when he admitted “Open weather” was not his thing – as if anyone likes playing in a freezing rain.

It was hardly a flawless card, but not bad for a 22-year-old from Holywood, Northern Ireland.

Yani Tseng. Speaking of 22-year-olds, imagine the cachet a player would have following a record-breaking season of two major victories and an even dozen worldwide triumphs? An international icon, right?

Maybe not, but Tseng’s season was historic by almost every measure sans an appropriate “Q rating.” She now has five career majors and won seven LPGA events in 2011. By comparison, Tiger Woods has won seven or more PGA Tour events in a season just four times in his career.

The native of Taiwan seems poised to turn down a sponsor exemption into the Tour’s Puerto Rico Open but she may want to consider the increased competition, not to mention the additional exposure.

Tee it forward. Traditionalists can decry the evils of the long putter and juiced-up golf balls all they want, the real threat to the game is a languid pace that has trickled down from the Tour to the local tee sheet.

In July the PGA of America and U.S. Golf Association launched the “Tee it Forward” campaign with tees based on a player’s driving distance that should, in theory, speed up play.

Tierra Rejada, a Bob Cupp design north of Los Angeles, went a step further with its “Players Course,” a 5,600-yard version of the longer layout. The two biggest obstacles to growing the game are cost and pace of play. “We’re working on both,” Tierra Rejada co-owner Ted Kruger told “Cut Line.”

Tiger Woods. To be fair, the body of work rates an “incomplete,” but red shirt will have to settle for a “MDF.” For the second consecutive year the former world No. 1 lost large portions of his season to injury, was forced to withdraw from The Players Championship and failed to win an official-money PGA Tour event.

Yet there were also signs of progress by way of a cup-clinching performance at Royal Melbourne (2-3-0) and drought-busting victory at the Chevron World Challenge.

It was a solid finish, but not even Woods was getting caught up in the hyperbole: “I think if I have a good year I should be on the ballot for Comeback Player of the Year,” he deadpanned at Sherwood.

Glad to see he didn’t misplace his sense of humor along the way.

Andrew “Chubby” Chandler. The affable player manager may have come within a tree root of completing the “Chubby Slam” at the PGA Championship, yet he suffered his share of slings and arrows in 2011.

Following Grand Slam victories for International Sports Management clients Schwartzel (Masters), McIlroy (U.S. Open) and Darren Clarke (British Open), Chandler’s year turned in September when Ernie Els, who had been with ISM since 2004, decided it was time for a management change.

Rock bottom for the former European Tour player may have come a month later in a lounge at Kennedy Airport in New York when McIlroy informed him “I’ve decided to move on.” Given the season’s extremes, Chandler may be thinking the same thing about 2011.

The Year of the Beard. Lucas Glover wasn’t the first Tour type to misplace his razor, but in 2011 “G-Lover’s” best Grizzly Adams beard became a bona fide trend among the play-for-pay set.

Whether it was Hunter Mahan and Kyle Stanley joining Glover with “playoff beards,” or Geoff Ogilvy and Rickie Fowler sporting 1970s-era mustaches for “Movember,' it took more than a “5 o’clock shadow” to register in 2011.

It was all enough to make Paul Azinger pine for more fresh-faced days: “In the '70s it was a $500 fine on the PGA Tour for playing with a beard,” he tweeted.

Tweet of the Year. @JustinRose99 “Winning the U.S. Open, so easy a caveman can do it.” Complete with a picture of 2009 Open champion Lucas Glover.

LPGA. The way the circuit meat-handed the Lexi Thompson affair one would think the tour is overrun with world-beaters in waiting, but the truth is the LPGA needs Thompson more than the teen needed a tour card.

Whether it was simply a case of bad timing or an administrative snafu, the LPGA missed what could have amounted to a “Hello, world” moment when the 16-year-old won the Navistar LPGA Classic by five strokes. Instead, commissioner Mike Whan was on a plane to the Solheim Cup and two weeks of paperwork and posturing ensued.

The tour eventually waived its age requirement for membership (18), but the entire affair had the feel of a missed opportunity. This wasn’t about paperwork or potential. This was about a proven commodity.

Stevie Williams. First the New Zealander ran through one too many stop signs with his former boss Tiger Woods and was downsized, then he seemed to make the transition from victim to vindictive when he called his new boss Adam Scott’s victory at the WGC-Bridgestone Invitational “the greatest week of my life caddying and I sincerely mean that.”

He completed the evolution to villain in November when he sparked a controversy with racially insensitive remarks directed at Woods during an awards dinner at the WGC-HSBC Champions in China.

Woods, in his own subtle way, put the entire affair in context when he was asked if Williams was a racist or just stupid? “Stevie's certainly not a racist, there's no doubt about that,” said Woods, leaving the rest of his answer open to interpretation.