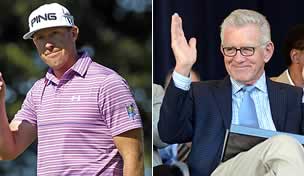 So much for the concept of the insular American. In the same news cycle, Brooks Koepka proved that there are boundless opportunities abroad for those inclined and the PGA of America revealed it is considering the road less traveled for the year’s final major. Both headline this week’s edition of a global Cut Line.

Have major, will travel. Give credit to PGA president Ted Bishop and his refreshing willingness to color outside the lines – from the association’s selection of Tom Watson to captain next year’s U.S. Ryder Cup team to its hard line against this year’s ban on anchoring.

This week, however, the trailblazer revealed that the PGA is conducting an internal study to determine the viability of playing the year’s final major outside the United States.

“This is an exercise we are going through, an analysis. It is far from a fait accompli that we are going to take the PGA Championship international,” PGA CEO Pete Bevacqua told Golf World.

“We need to push ourselves to think outside the box. What I have said internally is, ‘Shame on us if we don't consider it and go through the exercise.’”

Growing the game has become golf’s primary talking point in recent years, yet the PGA Tour has been largely indifferent to take the greatest show on grass outside the Lower 48 – just one of the four World Golf Championships (WGC-HSBC Champions) is played outside the United States.

Whether you like the concept of a passport PGA or not really doesn’t matter, Bishop & Co. deserve credit for recognizing the importance of an atlas.

The path less traveled. Koepka never set out to be a trailblazer, but last Sunday at the Frys.com Open he certainly had the look of a man who had bolted through his share of stop signs, not to mention a few stereotypes.

Last year, when Koepka left Florida State, he didn’t settle into a mini-tour routine with an eye toward Tour Q-School like most young American players. Instead, he burned through more pages in his passport than most people do in a lifetime on his way to earning status on the European Tour.

After nearly a year of grooming from the Czech Republic to Kenya, Koepka came within nine holes of his first Tour title last week in northern California. Koepka will get plenty of chances to secure his status in the U.S. – he’s playing this week thanks to his top-10 finish at CordeValle and the OHL Classic at Mayakoba on a sponsor exemption (word is the folks at The McGladrey Classic are also considering an exemption).

And if his Tour cameo doesn’t work out, he has the rest of the world to ply his trade next year.

Masters matters. There has been a lot handwringing over the move this year to offer invitations to next year’s Masters to winners of what were fall series events.

After job security – a two-year exemption is worth its weight in prize money and FedEx Cup points to most players – a ticket down Magnolia Lane is the most coveted carat in professional golf, but some say the addition of the fall events to the list of automatic Masters qualifiers will somehow water down the field next spring in Georgia.

Consider, however, that this year’s field at the Frys.com Open was deeper than last year, 28 world ranking points to the winner compared to the mandated minimum of 24 last year, and the fact that the winner, Jimmy Walker, has quietly been among the most consistent players on Tour over the last calendar.

And if all that isn’t enough to convince you, also consider that Walker moved to 45th in the world ranking with his victory and would likely have finished inside the top 50 in the world on the year-ending list, which would have exempted him into the Masters as well.

Unruly. This just in from the “Left Field” department. It seems Fox Sports baseball analyst Tim McCarver took exception to a tweet sent by Hunter Mahan earlier this week.

“If players are so upset at (Los Angeles Dodgers outfielder Yasiel) Puig celebrating a triple or clutch hit then get him out. I’m tired of hearing about baseball’s unwritten rules,” Mahan opined.

Which prompted McCarver to offer his own list of golf’s unwritten rules, which isn’t worth repeating because the game has just two unwritten rules – no automatic press and no “traveling handicaps.”

As anyone who has spent more than 30 seconds on Twitter has learned, McCarver needs to understand the most important rule of social media – don’t be thin-skinned.

Tweet of the week: @gfcgolf (Gonzalo Fernandez-Castano) “Message to anybody who likes scuba diving: my putter is lying at the bottom of the pond of the 18th green (at the Portugal Masters). You might like it. I didn’t.”

Fall follies. As if things haven’t been hard enough for players on the fringes of Tour membership this fall – just 37 of the 48 players from the Web.com Finals category played the Frys.com Open and only half (26 of 48) are playing this week’s stop in Las Vegas – Monday’s qualifying site for the Shriners Hospitals for Children Open was in less than mint condition.

The field of 98 players at the Coyote Springs Golf Club “four-spotter” were greeted with greens that looked more like browns and several players lashed out at the poor conditioning.

With full FedEx Cup points and a Masters invitation (see above) come higher expectations. A Monday qualifying venue doesn’t have to look like Augusta National, but not having grass on the greens is a deal breaker.