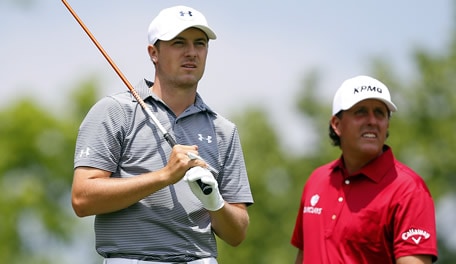 Jordan Spieth highlights this week’s edition following a victory on Sunday at the Hyundai Tournament of Champions and an even bigger haul on Wednesday in the boardroom.

A Coke and a smile. The debate over whether golf is entering the Jordan Spieth era is a trail that, at least right now, has no end, but there was no denying the 22-year-old’s influence following an eventful week both on and off the golf course.

Spieth began his season with an eight-stroke victory in Maui last week to quiet the concerns over a possible fall off from last year’s brilliant performance, and on Wednesday he announced he had signed a multi-year endorsement deal with Coca-Cola.

In the same news cycle, Golf Digest released its list of top earners for 2015 with Spieth unseating Tiger Woods atop the heap with $53 million in on- and off-course earnings.

Woods, who had been No. 1 on the annual list since it began in 2002, slipped to third behind No. 2 Phil Mickelson, who had a reported $52.3 million in earnings despite a relatively pedestrian year on the course.

Rory McIlroy, Jason Day and Rickie Fowler, to name a few, may eventually overtake Spieth, but until then it’s Jordan’s world.

A new beginning. As Tim Clark completed his week at the RSM Classic late last year he was approached by a pair of reporters who were looking for reaction to his final Tour round with an anchored putter.

The South African was resigned to the impending ban on the anchored stroke, which began last week at the Tournament of Champions, and despite his early objections to the new rule he seemed to look forward to the long debate ending.

“Honestly, I’ve been putting so bad no matter what I’ve used,” he said in October at Sea Island (Ga.) Resort. “Once it’s done I can move on and get to work on something and stick with it.”

With that fresh perspective came some positive results on Thursday at the Sony Open, where he opened with a 66 thanks in large part to a strokes gained-putting average of 2.63.

If Clark continues to trend in this direction he may end up thanking the U.S. Golf Association and Royal & Ancient for the rule change ... or not.

Requited Love. For the better part of three decades Davis Love III has been what scribes would consider a “go to” player when it came to all things golf.

After multiple stints on the PGA Tour policy board, a turn as the U.S. Ryder Cup captain (with a second chance looming later this year) and a lifetime between the ropes, Love can handle a delicate policy question with the same ease as a 2-iron off a hanging lie.

This week the Golf Writers Association of America recognized that commitment to cooperation when the organization named Love the recipient of the Jim Murray Award, which is given annually to the player who “demonstrates cooperation and accommodation to the media.”

In a time when the relationship between player and press has grown increasingly strained, Love is a beacon of accommodation regardless of how ridiculous the question may be (and we’ve asked some dreadful questions in our time).

What will Phil do next? Speaking of Mickelson, the southpaw was on Golf Channel’s “Morning Drive” on Wednesday and painted an interesting picture of his future.

Mickelson described his outlook for 2016 as “optimistic, but I’m also nervous.” He left swing coach Butch Harmon last year and has reportedly started a rather dramatic swing overhaul under the watchful eye of Australian instructor Andrew Getson.

After failing to advance to the Tour Championship for the second consecutive year in 2015, Mickelson plans to get his season underway at next week’s CareerBuilder Challenge.

“I’m hopeful that this off-season, the work I've put in, will get my swing back on the plane that it has been in the past, and allow me to hit the shots I've been able to hit as I did in the past,” Lefty said.

Tweet of the week: @TigerWoods “Had fun teaming up with [Michelle Wie] today for @TWFoundation. Thanks for the assist. #GoStanford

The goods news: Woods was at a golf course. The bad news: he didn’t appear to be hitting golf balls. #Progress.