Cut Line: Tiger out of the woods yet? 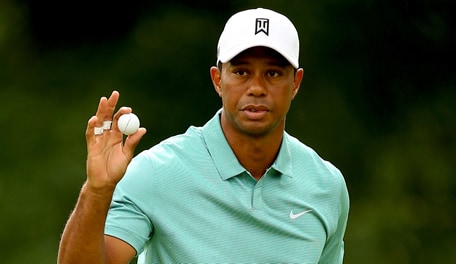 In honor of this weekend’s Fourth of July festivities we present a red, white and blue edition of Cut Line, from Donald Trump’s explosive comments on the campaign trail to golf’s fizzling response.

Out of the Woods. It’s easy to overstate this. Just as easy, in fact, as it was to put too much stock in Tiger Woods’ opening-round 80 at the U.S. Open or that third-round 85 at the Memorial.

The truth is Woods’ opening 66 on Thursday at the Greenbrier Classic will mean little if he doesn’t build on that momentum, but considering the competitive depths he has plunged to in recent weeks it would explain his optimism.

“I made a little bit of progress since last time I played,” Woods said on Wednesday. “Obviously not really saying much, but I'm looking forward to [Thursday]. Really looking forward to competing again and getting out here and playing.”

It’s become dangerously easy to stake Woods’ fortunes to a single round in recent years, but in golf that is short sighted and overly simplistic. But in this case, fans should be optimistic because Tiger is inspired to play, and after the road he’s been down in recent months that’s progress.

Unqualified success. After years of confusion and indifference, the Royal & Ancient seems to have conjured up a qualifying process for the Open Championship that is both understandable and entertaining.

Top finishers this week at the Greenbrier Classic – the top 4 players who finish among the top 12 on Sunday who are currently not eligible – and next week at the John Deere Classic. It’s a similar scenario on the European Tour.

Compared to the old International Final Qualifiers, 36-hole events held weeks before the Open at an awkward time in the schedule, the new system strikes a solid balance between competitive integrity and the realities of a global game.

“When Mexico sends its people, they’re not sending their best. They’re sending people that have lots of problems,” Trump said in his presidential campaign kickoff. “They’re bringing drugs. They’re bringing crime. They’re rapists. And some, I assume, are good people.”

After a few days of awkward silence, the PGA Tour, PGA of America, USGA and LPGA issued a joint statement: “While the LPGA, PGA of America, PGA Tour and USGA do not usually comment on Presidential politics, Mr. Trump's comments are inconsistent with our strong commitment to an inclusive and welcoming environment in the game of golf.”

Missing from that statement, however, was any mention of possible sanctions or repercussions for Trump’s comments. No acknowledgement that all four organizations hold championships on Trump’s various golf courses and no suggestion whatsoever that they were considering distancing themselves from the candidate.

Empty words II. Phil Mickelson has not been charged with a crime nor is he under investigation, according to an ESPN "Outside the Lines" report this week.

But the report did tie Mickelson to Greg Silveira, a former sports gambling handicapper who has pleaded guilty to three counts of money laundering. The money was from a “gambling client,” who according to two unnamed sources in the OTL story is Mickelson.

Last year, Mickelson was tied to iconic sports gambler and entrepreneur Billy Walters in a federal investigation into insider trading, an investigation Lefty has been at least partially cleared.

Yet while Mickelson doesn’t appear to have broken any laws, he may have run afoul of the PGA Tour player handbook.

The code of conduct section of the handbook forbids a player to, “associate with or have dealings with persons whose activities, including gambling, might reflect adversely upon the integrity of the game of golf.”

According to the handbook, a player found in violation of this section “shall be subject to a suspension from tournament play for a minimum period of two seasons.”

While federal officials don’t have any interest in Mickelson, the Tour may want to review it’s own handbook.

I lost to my wife playing pool and I was actually trying. Man card in question.

Give the 2013-14 Rookie of the Year credit for coming clean, but there is something to be said for discretion being the better part of valor.

Background noise. Remember when Jordan Spieth won the Masters and turned around three days later and teed it up at the RBC Heritage?

Remember young Jordan was lauded as a refreshing change from the insular Tour player norm for his decision to fulfill his commitment despite the whirlwind that accompanies a first major?

It is interesting that some of those same folks from the gallery who applauded Spieth for his decision to play Harbour Town are now roasting the 21-year-old’s decision to play next week’s John Deere Classic with the single-season Grand Slam on the line at St. Andrews.

Spieth became the sixth player to win the first two legs of the single-season Grand Slam by playing a schedule he felt was right for him, changing that schedule now to acknowledge the gravity of the moment, or worse to appease critics, would not only be foolish, but it simply wouldn’t be Jordan.